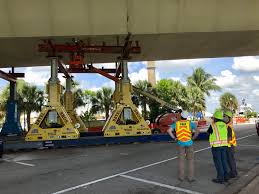 Several years ago, I had a condo on Florida’s Treasure Coast. Many times I would cross the Roosevelt Bridge in Stuart. Recently, the Coast guard warned that the bridge was at “risk of imminent collapse”!

Built in 1997, the bridge was made with a special class 5 concrete micro silica mix that was designed to resist corrosion and last 75 years. 23 years later large chunks of the bridge were falling into the water.

So what happened and who is at fault? It is too early that question but this isn’t the first transportation project we have investigated that involved substandard concrete or cheap steel. Under the federal False Claims Act, anyone with evidence of faulty concrete, poor quality steel or foreign steel in construction projects built with federal funds may be eligible for a large cash reward.

We have no idea yet why a big bridge with 564,000 square feet of decking couldn’t even last 1/3 its scheduled life. Someone is at fault. Taxpayers are out tens of millions. If there is any silver lining to this story, no one was killed or injured.

The drama started recently when diners at a restaurant located under the bridge saw a big crack and hole in the concrete. After Coast Guard officials viewed the bridge, the decision was made to temporarily shut the bridge until a thorough inspection could be completed.

A Florida DOT manager said, “I’m definitely surprised about what has happened. It’s a new bridge, and up to this point I haven’t heard of any problems with it.” The CEO of a concrete repair company who viewed photos of the damage said, “[O]ne possibility is that the concrete may have been mixed improperly.”

We have investigated many transportation projects involving substandard building materials. Another story we followed was the collapse of the FIU pedestrian bridge in Miami. That collapse was due to poor engineering.

President Abraham Lincoln and Congress passed the False Claims Act during the Civil War. Back then, contractors were selling the union Army lame mules and gunpowder that was laced with sawdust. Today, a few unscrupulous vendors are selling mislabeled steel or substandard concrete.

Like cars and jewelry, there are vast differences in the quality of construction materials, especially metal and concrete. The concrete used on a driveway is vastly different than that used on a bridge span.

A vendor or contractor that deliberately substitutes lower quality building materials not only endangers the public; they also violate the False Claims Act. That law allows the government to collect triple damages and high fines. It is certainly a strong incentive for businesses to not cheat. Unfortunately, many businesses never get caught.

When corrupt businesses do get caught, it is usually because of concerned workers who take a stand against greed and fraud. More on that below.

Another law makes it illegal to use foreign steel on federally funded building projects. (Most state road and bridge projects rely heavily on federal monies.) The Buy American laws were passed during the throes of the Great Depression. Originally, they passed to protect American jobs. Today, there is a growing concern about the lack of quality from imported steel.

The False Claims Act gives a voice to those concerned workers. Under the Act, whistleblowers who expose fraud are protected from retaliation. Workers that are fired or demoted or forced out can receive double damages. And the law also pays attorneys’ fees making it easier to find lawyers to take the case.

Another big component of the law are cash rewards. The Act allows whistleblowers to receive between 15% and 30% of whatever the government collects from the wrongdoers.

To qualify for a reward, one must have “original source” information. The law was written for insiders. We believe that there are folks involved in the construction of the Roosevelt Bridge who knew about the quality of the concrete and steel used in the project. We commonly see companies import cheaper steel from China or Turkey and then use phony certificates showing that it was sourced from an American steel mill.

There are also different ways of making concrete. The high performance concrete used for bridges requires fine-grained sand, fumed silica, small steel fibers, superplasticizers and special blends of high-strength Portland cement. All of this greatly adds to the cost. Unfortunately, if someone is not constantly monitoring the manufacturing process, it is hard to know if corners were cut or lower quality ingredients used.

Update on the Roosevelt Bridge

On June 27th, the Florida Department of Transportation has fully inspected the bridge and found that the bridge is not in danger of imminent collapse. Unfortunately, the bridge is compromised and it remains to be seen whether it can be repaired or if must be completely replaced. For now, two of the six lanes are closed and trucks have been banned.

The Roosevelt Bridge is part of US Route 1, one of the busiest highways in Florida. Trucks will have to be diverted through city streets.

Although the bridge is now partially open, we remain interested in finding a whistleblower with information about any foreign or poor quality steel or substandard concrete used in its construction. In fact, if you have information about poor construction materials in any government building project, you may be entitled to a reward. We have already successfully prosecuted cases involving the use of Chinese steel on a VA hospital, an intermodal terminal in Miami, a commuter rail system and a federal courthouse.

To learn more, visit our government contract fraud and Buy American whistleblower pages. Ready to see if you have a case? Contact us online, by email or by phone 202-800-9791.

All inquiries are protected by the attorney – client privilege and kept strictly confidential. We accept cases anywhere.