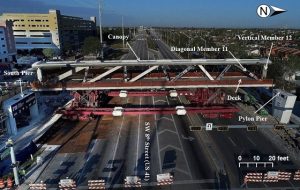 [With updates through June 2020] When this post was first written, Miami and Dade County emergency workers are still clearing the rubble and searching for survivors. For those who don’t remember, a new pedestrian bridge built on the Florida International University campus collapsed. When it fell, it crushed several cars and pedestrians below. Six people died, eight were injured and eight cars destroyed.

Doubtless there were claims by all those injured and by the families of those killed. Our prayers and deepest sympathies go out to all that were affected. Hopefully, the lessons from this incident will prevent other tragedies from occurring in the future.

Having been involved in several highway construction defect cases, we believed that the FIU bridge collapse was preventable.

For months we have warned about the dangers of contractors doing work on government funded bridge and construction projects. (The FIU bridge received $13.2 million from U.S. Department of Transportation and other federal funding and $2.9 million in local funding.)

Was Inferior Steel or Concrete to Blame? 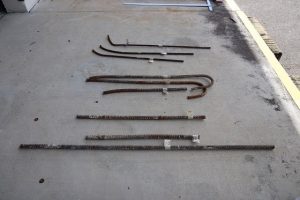 The FIU Bridge was a concrete truss bridge. The primary span was reinforced concrete. Often we see substandard concrete or inferior steel as a cause of roadway or bridge failures. The FIU bridge was so new that it wasn’t even open yet, however.

These Buy American laws are important for another reason. Safety.

Steel is not a fungible commodity. There are different types and grades. Some steel works better in heavy loading bear environments, some is better for long expanses such as found on a bridge. And other steel has better corrosion resistance. (As I write this post, a court today decided a multimillion construction dispute involving the Venetian Hotel in Las Vegas. The builder of the casino’s roof top pool allegedly used steel supports under the pool that weren’t corrosion resistant.)

Every piece of construction steel manufactured (also known as “rolled”) in the United States comes with a certificate of origin. That certificate not only says where the steel was made, it also notes key data about the composition of the steel.

Unfortunately, steel from Turkey and China costs half the price of U.S. steel. And some companies cut corners by falsifying the country of origin on steel. They do that by using a fake certificate from a U.S. steel mill or by transshipping the steel so that it doesn’t get delivered directly from China (or some other foreign country).

Now to connect the dots. When a contractor uses steel with a phony certificate, how does anyone know where it was really made and if it meets the quality specifications of a given project?

They don’t. And when cheap foreign steel is substituted for U.S. made steel, accidents happen, and people are killed.

Several years ago, a concrete façade fell off a parking garage in Milwaukee killing a teen walking on a sidewalk below. The culprit? Defective steel. Where was the steel made? No one knows as the records were gone by the time of the accident.

During the “Big Dig” tunnel project in Boston, another piece of concrete fell, this time killing a motorist. Once again, investigators believe that a defective steel hanger was at fault. And in San Francisco, state officials are eyeing a billion dollar price tag because some of the Chinese steel used on the bridge is corroding.

In defective bridge construction, our usual suspects are Turkish rebar and Chinese made steel girders. Was that the cause of the FIU bridge collapse? We didn’t know when we first wrote the post.

Nor did we know if inferior concrete was to blame.

Ultimately, the National Transportation Safety Board concluded otherwise. They said,

“[T]he probable cause of the Florida International University (FIU) pedestrian bridge collapse was the load and capacity calculation errors made by FIGG Bridge Engineers, Inc., (FIGG) in its design of the main span truss member 11/12 nodal region and connection to the bridge deck. Contributing to the collapse was the inadequate peer review performed by Louis Berger, which failed to detect the calculation errors in the bridge design. Further contributing to the collapse was the failure of the FIGG engineer of record to identify the significance of the structural cracking observed in this node before the collapse and to obtain an independent peer review of the remedial plan to address the cracking. Contributing to the severity of the collapse outcome was the failure of MCM; FIGG; Bolton, Perez and Associates Consulting Engineers; FIU; and the Florida Department of Transportation to cease bridge work when the structure cracking reached unacceptable levels and to take appropriate action to close SW 8th Street as necessary to protect public safety.”

In other words, just about everyone involved in the project shared blame. The quality of the steel and concrete which is a factor in so many bridge and highway failures was not a factor here. Said the NTSB, “The concrete and steel materials used during construction of the pedestrian bridge were not a factor in its collapse.”

We were right about the tragedy being preventable. We were wrong, however, in thinking bad steel might be a cause. That doesn’t mean that we will ever stop investigating highway projects that improperly use substandard steel or concrete. Both can be fatal.

If you have inside information about substandard materials or foreign steel being substituted for American made steel on government sponsored building projects, call us. You may be entitled to an award under the federal False Claims Act.  Several states have their own whistleblower reward programs for state funded highway and building projects. More importantly, your actions in stepping forward may prevent another tragedy such as the FIU bridge collapse. For more information, contact us online or by phone at 414-704-6731.

Why were we worried that cheap foreign steel or inferior cement might be behind the FIU Bridge Collapse? Because the primary contractors on the FIU project have a less than stellar track record. We worry that these tragic accidents will continue to happen until more whistleblowers step forward.

Munilla Construction Management (or MCM) was sued in 2018 after a makeshift bridge broke at a construction site at the Fort Lauderdale – Hollywood International Airport. A TSA worker was hurt when his weight caused the bridge to collapse. The lawsuit accuses Munilla of substandard work and of using “incompetent, inexperienced, unskilled or careless employees.”

Munilla was also the contractor on a major expansion project at the Miami International Airport. A subcontractor on an airport job there was prosecuted by the Department of Justice for using mislabeled foreign steel.

The other major contractor in the FIU bridge project is the Figg Bridge Group of Tallahassee. In 2012, a 90-ton section of a railroad overpass collapsed and fell onto the tracks below. No one was seriously injured. The Miami New Times reports that bridge was being built by Figg.

Whistleblower Awards and the Need to Prevent More Bridge Collapses

Although it took months to investigate, from the beginning almost everyone agrees that the FIU bridge collapse was preventable. Whether the collapse was due to cheap foreign steel, defective workmanship, inferior concrete or a poor design, new bridges should never collapse.

The bridge was installed just days before its collapse.

Anytime a contractor defrauds a government agency, that contractor violates the False Claims Act. Passed during the Civil War, the Act has been the government’s primary tool against fraud for over 150 years.

The False Claims Act allows the government to collect triple damages and impose high fines against companies that knowingly or recklessly defraud the government. Obviously, not every construction defect equates to fraud. Defects become fraud, however, when a company covers them up or knowingly substitutes inferior components or does substandard work.

A bad design probably isn’t fraud but covering up defects or substituting cheap foreign steel is.

Something went wrong at FIU and that something resulted in multiple deaths. If you have information about any government funded contract involving substituted goods, gross negligence or shoddy work, give us a call. We can investigate and decide if the case is fraud or mere negligence.

Our goal is to stop the fraud before someone gets hurt. Our goal is also to help our whistleblower clients receive proper compensation for steeping forward. If we don’t think you are eligible for an award we can still help you report your safety concerns, anonymously if necessary.

While we mourn the victims at Florida International University, it is important to work to prevent another tragedy like this from ever happening again.

For more information, contact attorney Brian Mahany online, by email () or by phone at 414-704-6731. All inquiries are protected by the attorney client privilege and kept confidential. See also our Buy American and Chinese Steel and DOT whistleblower information pages.

Bolton Perez was in charge of bridge inspections, Structural Technologies did the tensioning work and The StructuralGroup of South Florida did some of the concrete work. The OSHA findings do not mean they are guilty in the bridge’ collapse.  None of the five companies have admitted any wrongdoing and can still appeal the OSHA findings.

OSHA’s investigation concentrated mostly on worker safety but their findings are still important. One of the six people killed was one of the construction workers. Several other workers were injured. The others killed were pedestrians and motorists who were under the bridge when it collapsed.

We now know that on the day of the collapse, an engineer from Figg investigated a report of cracks in the bridge. The engineer reportedly had no safety concerns despite the new cracks.

In addition to the ongoing NTSB investigation, 15 personal injury and wrongful death lawsuits have been filed.

It is now too late for a whistleblower in the FIU bridge collapse but we know there are other bridges and highways that are built with substandard steel and concrete or improper designs. When a bridge or building collapses, that doesn’t mean fraud was involved. Sometimes it happens because of an honest (but fatal error). Whistleblower rewards become available when there is evidence that contractors or vendors knowingly supplied substandard products, deliberately switched raw materials or hid evidence of their noncompliance.

We always hope whistleblowers will step forward before anyone else must their life. If you have inside information, call us. All inquiries are protected by the attorney – client privilege and kept confidential. Our contact details are above.

According to bankruptcy court records, the company was in financial difficulties before the FIU bridge collapse. The company lost $8 million in 2017, the year prior to the accident. Whenever companies are financially stressed, there is a worry that those stresses may have contributed to cutting corners during the construction. That doesn’t appear to be the case here although we still wonder how an engineer could know that the bridge was cracking yet not close the street below.

In May 2019, Magnum and its insurance companies settled the death and injury cases for $42 million.

Once again, we remind readers that if you have inside knowledge of a contractor defrauding or cutting corners on a federal or state funded highway or construction project, you may be eligible for a cash award if you are the first to blow the whistle.

Claiming an award means filing a sealed complaint in state or federal court. Please visit our government contractor whistleblower and DOT whistleblower pages or contact us directly online or at