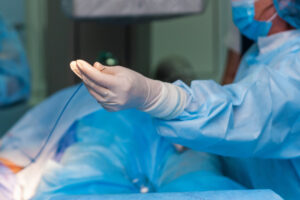 Treatment of vascular diseases with angiography

Patients Harmed Because of Defective Catheters Made by Cordis Corporation May be Entitled to Substantial Damages.

The FDA has announced a recall of Cordis SUPER TORQUE MB Angiographic Catheter with Radiopaque Marker Bands due to the potential for the marker bands to move or dislodge during procedures. The agency says it has received reports of 167 complaints (mostly from doctors). Eight injuries have been reported but many doctors don’t report adverse events to the FDA out of fear of lawsuits. It is impossible to tell how many people have been injured.

The Cordis SUPER TORQUE MB Angiographic Catheter with Radiopaque Marker Bands is a device used by doctors to visualize and measure parts of the vascular system when used with radiopaque (X-ray detectable) contrast media. Trouble can happen if the catheter gets stuck between the walls of your heart and vascular system.

Typically, a failed catheter could cause a delay in the procedure or require additional surgery to remove the catheter. Extreme cases can result in a stroke, heart attack, or even death.

In late July, Cordis issued an “urgent letter” to healthcare providers telling them to alert patients that may have received this catheter as part of a heart problem.

Although Cordis Corporation began notification efforts earlier this year, the FDA has now issued a class 1 recall, the most serious of all recalls. We believe that 25,000 of these devices were used on patients between January 1, 2019 and May 19, 2021, when the company stopped shipping these catheters. Simply because Cordis issued a recall doesn’t mean that defective catheters in stock at hospitals and surgical centers weren’t used after that date.

Unfortunately, doctors are not required to report suspected product defects. The FDA’s reporting system is voluntary. That is, we believe that hundreds of patients may have been harmed and don’t know that the source of their problems may be a defective catheter.

The device itself is a pig tail shaped device made of polyurethane and comes in a wide variety of sizes. Cordis makes a wide variety of catheters, and not all are subject to the recall. According to the FDA, the following catheters have been recalled:

We understand that few patients will know of the device used in their procedure. If you have concerns, speak to your doctor and learn what your options are if this device was used. If you suffered an injury, make sure to contact an experienced products liability lawyer. Hospital records should reveal the exact devices used on you during diagnostic surgeries.

Since the recall is so new, we are currently investigating these claims. If you believe you or a loved one suffered a heart attack or stroke or died because of one of these devices, contact us immediately. We and our national network consider cases anywhere in the United States. For more information, contact us online, by email or by phone at 202-800-9791.

Are you a present or former employee of Cordis or a healthcare worker with inside knowledge of these products? As part of our investigation, we would love to speak with you. There may or not be whistleblower rewards available. All inquiries are protected by the attorney – client privilege and kept confidential.