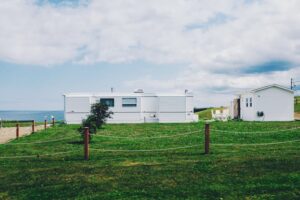 Clayton Homes is owned by Berkshire Hathaway, the 4th largest pubic company in the world. It was acquired by billionaire Warren Buffet and Berkshire Hathaway in 2003. Since then, Clayton has become the dominant force in the mobile home industry. Today almost half the mobile homes sold in the U.S. are sold and and / or financed by Clayton Homes or one of its affiliates.

Most of the financing gets directed to Vanderbilt Mortgage or 21st Mortgage. We are told that borrowers are not told of the relationship between the companies.(Both companies are owned by Berkshire Hathaway.) Nor are they told they have financing options.  Customers often feel like they are “shopping around” for the best deal but little do they know that Berkshire controls the industry.

In January 2016, we posted in search of whistleblowers at Clayton Homes and Vanderbilt Mortgage. That post was prompted by investigative journalism reports from the Seattle Times and our friends at the Center for Public Integrity.  Those stories were filled with predatory lending tales and extremely high interest loans. We were also prompted after several Congress members asked the Justice Department to begin its own inquiry.

Since that post, we have heard from several homeowners. All have horror stories of predatory lending and / or bait and switch tactics. Our investigation has revealed shocking abuses both on the underwriting end (loan origination) and on how the companies service their loans.

Mobile home buyers are often on fixed income or strapped for cash. Unfortunately, Clayton Homes and its management know this. They know that most borrowers can’t afford a lawyer to sue for damages. Despite a 2011 jury finding that Vanderbilt Mortgage, Clayton Homes and affiliate CMH Homes were guilty of a racketeering conspiracy, things haven’t improved.

Presently we have expanded our investigation of these companies to now include possible class actions on behalf of homeowners. If you borrowed from Vanderbilt Mortgage, 21st Mortgage or another affiliate to purchase or refinance a Clayton Home and believe you were treated unfairly, contact us.

Please note that we cannot take individual cases against these companies but are considering a class action on behalf of all similarly situated borrowers. To contact us about Vanderbilt Mortgage, Clayton Homes or 21st Mortgage, write to . (We regret we cannot take phone calls on class action cases unless you are already a client.)

In class cases, the law firm typically does not charge costs or legal fees unless you collect money.

Our investigation of Clayton and Vanderbilt reveals the existence of class action waivers, at least in the documents that we have reviewed to date. A recent decision by the Unites States Supreme Court suggests that these waivers are enforceable as a matter of law. Your rights against Vanderbilt Mortgage and other companies that use lawsuit waivers and / or class action waivers may be limited. Hopefully Congress will outlaw these provisions.

A class action waiver coupled with a lawsuit waiver means homeowners cannot sue Vanderbilt Mortgage or any other lender / manufactured housing manufacturer that uses these clauses in their contracts. Instead, consumers may be forced into individual arbitration.

The big mortgage guaranty organizations – Fannie Mae and Freddie Mac – have been considering banning the use of these waivers in mortgages they insure. That wouldn’t stop Clayton from including such provisions in their purchase and sale agreements.

In the 1700’s the framers of our Constitution included in the Bill of Rights the right to sue. The 7th Amendment of the Constitution says, “In Suits at common law, where the value in controversy shall exceed twenty dollars, the right of trial by jury shall be preserved, and no fact tried by a jury, shall be otherwise re-examined in any Court of the United States, than according to the rules of the common law.”

Unfortunately many companies and banks sneak language into contracts which require the consumer to waive their right to seek redress of their grievances by a jury of their peers. Add Clayton and Vanderbilt to the list of bad corporate citizens. The bottom line, we can’t help you. You will probably need to find a local lawyer who handles individual consumer arbitration claims.