The Most Active Firms In Public False Claims Cases 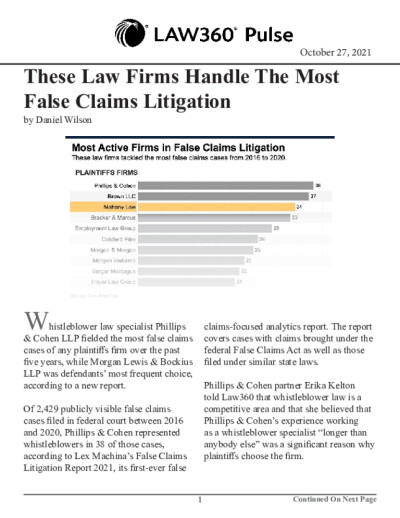 Whistleblower law specialist Phillips & Cohen LLP fielded the most false claims cases of any plaintiffs firm over the past five years, while Morgan Lewis & Bockius LLP was defendants’ most frequent choice, according to a new report.

Of 2,429 publicly visible false claims cases filed in federal court between 2016 and 2020, Phillips & Cohen represented whistleblowers in 38 of those cases, according to Lex Machina’s False Claims Litigation Report 2021, its first-ever false claims-focused analytics report. The report covers cases with claims brought under the federal False Claims Act as well as those filed under similar state laws.

Phillips & Cohen partner Erika Kelton told Law360 that whistleblower law is a competitive area and that she believed that Phillips & Cohen’s experience working as a whistleblower specialist “longer than anybody else” was a significant reason why plaintiffs choose the firm.

“What I have experienced over the years is that whistleblowers are smart, they do their homework, and they often will talk to several different whistleblower attorneys before selecting one,” Kelton said. “And they want to go with a lawyer, generally, who has shown a track record of success, which we have, who is respectful of and aware and sensitive to the experiences that they’re going through and the risks that they’re facing.”

Phillips & Cohen came in just ahead of fellow whistleblower specialists Brown LLC, Mahany Law and Bracker & Marcus LLC, each of which represented relators in more than 30 public false claims cases over those five years.

Eric Sitarchuk, a Morgan Lewis partner who represents clients in major FCA investigations and litigation, attributed his firm’s position in part to its long experience in FCA litigation, effectively going back to a significant 1980s amendment that incentivized whistleblowers to come forward and raised potential damages available to the government.

The firm represents a wide variety of clients, such as government contractors, technology firms and banks, while continuing to bring in new attorneys with differing industry focuses, according to Sitarchuk.

While the report does not break down firms’ work by industry or client, Lex Machina said there was generally very little overlap between cases involving the most frequently used plaintiffs firms and defendants’ firms, “likely due to the tendency for law firms to specialize in certain industries in this practice area.”

The report only captures cases publicly available through the PACER court docket system. Whistleblower false claims suits are initially filed under seal, and can remain under seal for years while the U.S. Department of Justice investigates claims and decides whether it will intervene.

For example, while the report captures 271 newly filed cases from 2020, the DOJ’s most recent figures, which can draw from nonpublic cases, indicate that 922 new FCA matters were filed in fiscal year 2020, up significantly from 786 the year before. The difference in numbers suggests that many more cases will come to light over time on PACER.

The median time for a false claims case reaching a resolution through summary judgment was nearly four years, likely because of delays resulting from the sealed filing process as well as what Lex Machina noted was “the complex nature of False Claims litigation.” The slowest-moving case resolved between 2016 and 2020 took roughly a decade to conclude, according to the report.

For the 27 false claims cases that went to trial from 2016 through 2020, the median time period to get to that point was almost 4½ years.

That is longer on both fronts than litigation takes in other practice areas tracked by Lex Machina, it said, with consumer protection cases, for example, reaching summary judgment in a median time of 465 days and heading to trial within 701 days.

The median time to termination for the 3,075 false claims cases Lex Machina reported as being resolved, which includes dismissals and settlements, during that five-year period was 822 days, compared to 155 days for consumer protection cases. More than 75% of false claims cases tracked in the report were settled and an additional 11% were resolved on procedural grounds.

The bulk of procedural resolutions were uncontested dismissals, which the report’s authors said were “likely due in part to the tendency of Qui Tam relators to abandon their prosecution once the United States declines to intervene.”

Of the 375 cases resolved through a court judgment, the relators or government won 134 of them, or nearly 36%, while defendants succeeded in 241 cases, or 64%, most frequently because of the failure by a whistleblower to plead with sufficient particularity under Federal Rule of Civil Procedure 9(b), according to the report.

Rule 9(b) issues were cited in 254 judgments or trial decisions in favor of defendants, and some cases can involve more than one such ruling, Lex Machina said.

The next most common reason for judges ruling in favor of defendants was a lack of actual falsity, followed by a lack of causation for an alleged false claim and failure to show requisite knowledge. A lack of materiality for the government’s decision to pay, the most hot-button issue in false claims litigation since the U.S. Supreme Court’s landmark 2016 Escobar decision, came in fifth on the list, cited in 101 decisions, according to the report.

The top 19 defendants for public false claims cases from 2016 through 2020 are all in the pharmaceutical industry, whether as manufacturers or distributors, and many are part of the same cases related to the opioid crisis, Lex Machina said.

This fits in with the trend since the late 1990s for health care and related industries to be the main driver of both false claims cases and recoveries each year, according to DOJ figures.

The Middle District of Florida was the most active court for false claims cases, handling 191 of the publicly visible cases, or close to 7.9% of all cases, while the Southern District of Florida handled a further 63 cases, which Lex Machina said can likely be attributed to a large number of cases involving Medicare fraud.

Florida, particularly southern Florida, has long been viewed as a “hot spot” for Medicare fraud by the Centers for Medicare and Medicaid and the DOJ, with the department launching its first Medicare Fraud Strike Force in Miami-Dade County in 2007.

And although the busiest districts for false claims litigation had a tendency to spread the load among their judges relatively evenly, one judge is notable for taking on a particularly outsized false claims caseload: the Northern District of Illinois’ now-retired former Chief Judge Rubén Castillo.

Despite retiring in 2019 without taking senior status, Castillo was the judge in 33 publicly visible false claims cases between 2016 and 2020, 14 more than the next-busiest false claims jurist, Judge Virginia M. Hernandez Covington of the Middle District of Florida, Lex Machina said.