The suit claims Dell lied about the laptop’s upgradeability. 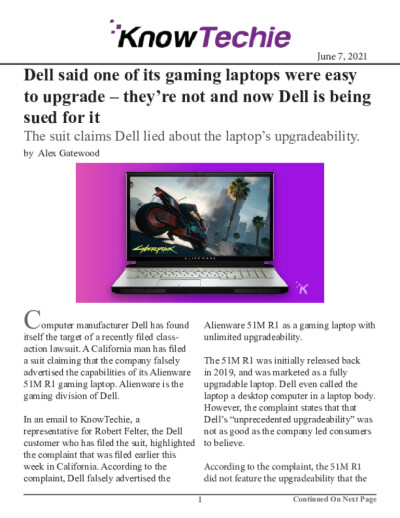 Computer manufacturer Dell has found itself the target of a recently filed class-action lawsuit. A California man has filed a suit claiming that the company falsely advertised the capabilities of its Alienware 51M R1 gaming laptop. Alienware is the gaming division of Dell.

In an email to KnowTechie, a representative for Robert Felter, the Dell customer who has filed the suit, highlighted the complaint that was filed earlier this week in California. According to the complaint, Dell falsely advertised the Alienware 51M R1 as a gaming laptop with unlimited upgradeability.

The 51M R1 was initially released back in 2019 and was marketed as a fully upgradeable laptop. Dell even called the laptop a desktop computer in a laptop body. However, the complaint states that Dell’s “unprecedented upgradeability” was not as good as the company led consumers to believe. Dell laptops are preferred by most college students because of the wide variety of options that Dell offers and premium build quality even when you are on a budget.

According to the complaint, the 51M R1 did not feature the upgradeability that the company promised. Less than one year after the laptop was launched, Intel released its tenth-generation CPUs, which were not compatible with the 51M R1. While the laptop does contain some GPU upgradeability, there was no way for the laptop to support the new RTX Super series of GPUs that came from Nvidia shortly after the laptop’s launch.

Essentially, the complaint claims that Dell was acting maliciously in marketing the Alienware 51M R1. Because the company knew that its components would become outdated soon, Felter and his lawyers feel that the company misled its customers.

This lawsuit is still in the very early stages, but Felter has some pretty high-profile lawyers on his side. Felter is represented in this case by high profile whistleblower Brian Mahany as well as class action lawyers Steve Hochfelsen and David Kani.