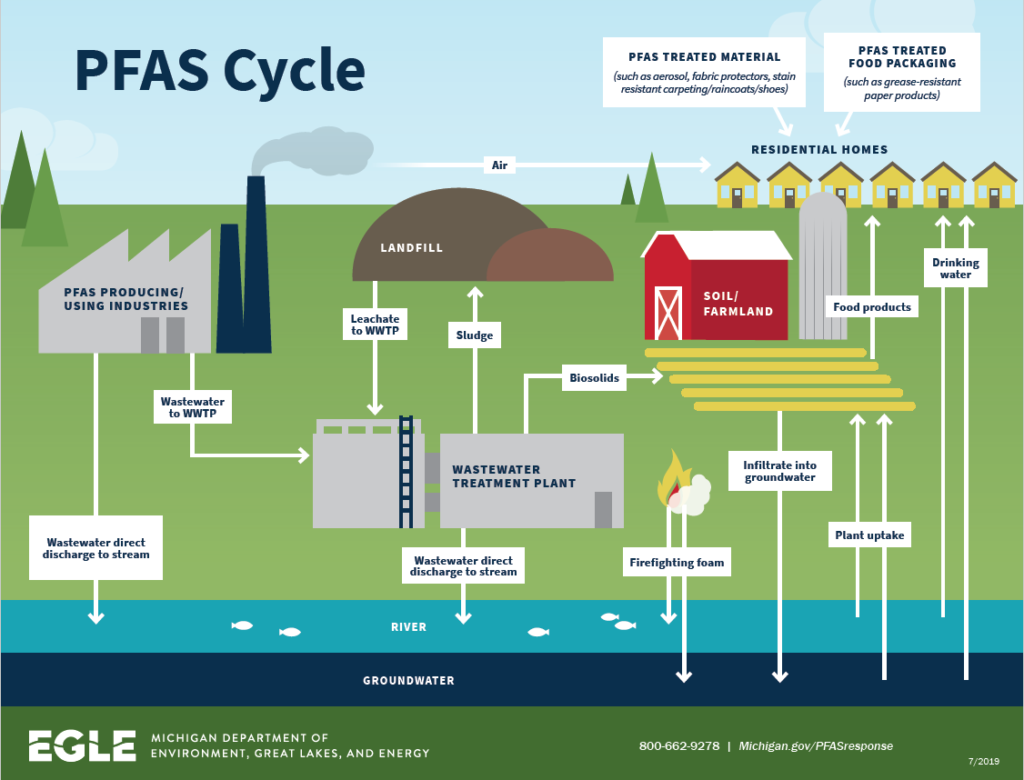 Nathan Saunders, a resident of Fairfield, Maine, has recently initiated a PFAS class-action lawsuit against Sappi North America and several affiliates. According to the lawsuit, the State of Maine recently found that the water in Saunders’ private well was “contaminated with PFAS at 12,910 parts per trillion—nearly 185 times greater than the United States Environmental Protection Agency Health Advisory limit of 70 ppt.”

Per- and polyfluoroalkyl substances, known as PFAS, have been linked to various cancers and other life-threatening conditions. They are known as ‘forever chemicals’ because they don’t break down after entering the human body and continue to accumulate over time. Today, millions of Americans rely on drinking water sources with a dangerous level of PFAS pollution.

According to Saunders’ complaint, Sappi’s paper mill in Skowhegan contaminated drinking water wells across Somerset County, Maine. If the class action is certified, any person who resided in Somerset County for at least a year between 1967 and the present could potentially join. Saunders and his attorney, Brian Mahany, seek compensation to cover health monitoring for any affected individuals and other damages. The renowned whistleblower attorney estimates damages could amount to hundreds of millions of dollars.

As of March 2021, Maine legislators are considering a bill that would mandate the disclosure of PFAS content in consumer products. Known as HP706, the bill would require manufacturers to report any addition of PFAS to their products, starting in 2023. Michigan is currently evaluating similar legislation.

Another bill would extend the time period to sue for PFAS related injuries. In a recent testimony given in support of extending the statute of limitations (time period to sue), Nathan Saunders told the State of Maine’s Legislature:

“On the other side of the street from our home are many acres of cornfields where spreading of some material, I thought it was just manure, has occurred for many years and according to the DEP, was stopped in 2003. In 2010, seven years later, my wife’s kidneys failed hard. To keep her alive, she went on kidney dialysis three hours per day, three times a week, for eight months until we were fortunate in that I was able to donate a kidney to her. Although the kidney transplant was lifesaving, this event has been life-changing and very challenging to my wife and me, and has had a significant impact on our whole family.”

According to an EPA report cited by Saunders, “Several epidemiological studies on occupational, general, and community populations report an association between exposure to PFAS and reduced kidney function.”

Saunders spoke in favor of two bills that would allow Maine property owners to file lawsuits up to six years after discovering pollution in their land.

PFAS have been in use since the 1940s. Discovered by chance at a DuPont manufacturing facility, they became popular due to their water and oil repellent capabilities.

Since then, PFAS have been found everywhere, from Arctic polar bears to open ocean waters and from farmlands to private water wells. The CDC has detected PFAS in umbilical cord blood, breast milk, and the blood of 98 percent of Americans.

According to the Environmental Protection Agency, PFAS can be found in:

The EPA has stated that exposure to PFAS can cause:

Saunders is only one among thousands of Maine residents whose lives were dramatically altered by the presence of high levels of PFAS in the environment. The State has tested the water from dozens of private wells, consistently finding levels of the chemicals hundreds of times higher than federal safety limits. In Fairfield alone, the State of Maine found over 45 wells with PFAS levels over the current health advisory standard.

Liquid waste from paper mills has customarily been used as fertilizer on farm fields.

While wastewater has usually gone through sewage treatment plants, this process does not remove PFAS. For decades, toxic sludge has been spread over fields without undergoing PFAS testing. This has resulted in extended contamination of produce, farm animals, and groundwater.

At the epicenter of contamination in Fairfield is a dairy farm that unknowingly used the polluted sludge as fertilizer. According to a spokesperson for the dairy farm,

“At the time the sludge was spread,” one of the owners of the now inactive farm said, “we had no idea what PFAS was and certainly did not know about the dangers of the chemicals. Farmers across the state were sought out to participate in the sludge program, which offered it as free fertilizer that was good for the land and would help all those involved.”

It appears that much like the tobacco companies, the manufacturers of PFAS kept Americans in the dark for decades about the widespread impact of the chemicals on human health.

Over 200 Million Americans Exposed to PFAS in Drinking Water

Although PFAS, a category that includes thousands of compounds, are no longer used by U.S. manufacturers, they are still present all over the country, most alarmingly in our drinking water supplies.

The Environmental Water Group (EWG), a reputable nonprofit, has “mapped PFAS contamination of drinking water or groundwater at more than 2,300 sites in 49 states.” According to EWG estimates, over 200 million Americans have at least 1 ppt of PFAS in their drinking water.

Over the last few years, several states and water agencies, including the Santa Clarita Water Agency, various water districts in Orange County, the State of Michigan, and the State of Minnesota, have sued PFAS manufacturers over water pollution, securing many multimillion-dollar settlements. These funds have later been used to cover PFAS cleanup costs.

The EWG has urged the Biden administration to “fulfill its pledges to set a drinking water standard for PFAS, to end non-essential uses of PFAS in household items, and to designate PFAS as hazardous substances.”

As we hope for more anti-PFAS legislation to succeed in Maine and the rest of the country, people whose health has suffered due to PFAS contamination are resorting to multimillion-dollar lawsuits to try to obtain compensation and protect their families.

Were You Injured or Affected by PFAS?

We are currently seeking anyone who has PFAS in their drinking water or who suffered injuries from PFAS contamination. Right now we are accepting injury cases for people with kidney cancer, loss of kidney function, and testicular cancer. We are also considering birth defect and thyroid cancer cases.

We have a proven track record of serious, high-value results.  That means we believe in our ability to win your case and therefore accept cases on a contingency fee basis. No fees or costs unless we win. We also don’t charge for consultations.

Dealing with a contaminated drinking water, cancer or a birth defect can be a difficult time in anyone’s life. However, it’s important to remember that the companies that produced, used or disposed of dangerous chemicals take responsibility for their actions and protect the public from harm. If you or a loved one were affected by PFAS, contact us. The PFAS lawyers at Mahany Law are dedicated to protecting your rights.

For more information, visit our PFAS Lawyer / PFAS Contamination Lawsuit page. Ready to see if you have a case? Contact us online, by email or by phone 202-800-9791. Cases accepted in Maine, Wisconsin, D.C., Florida, Maryland, Virginia, Michigan and nationwide. All inquiries are kept strictly confidential.