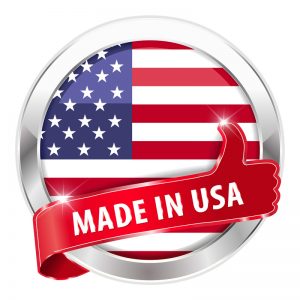 Our society is deeply divided these days but one thing we all believe in is our country. Whether you are a Republican business owner or a lifelong union worker, we take pride in goods manufactured here in the U.S.A. Some scam artist, however, want to earn a quick buck by taking foreign made goods and labeling them as made in America. One of those crooks is now facing prison.

Daren Arakelian, age 52, of Rensselaer, NY pled guilty to federal wire fraud charges this week. His crime?  Selling a wide variety of items to the government and claiming they were made in the U.S. The goods actually came from China.

As regular readers of this blog already know, violations of Buy American law are not victimless crimes. Beginning with the Great Depression and continuing through President Trump’s several Buy American, Hire American Executive Orders, the government has a long history of supporting American businesses. These laws help safeguard American jobs.

As we recently learned with the coronavirus, our increasing reliance on foreign sourced goods can lead to shortages of vital goods in the U.S. when a disaster strikes. For example, did you know that most of the antibiotics we take when sick are made in China? What happens when Chineses factories shut down because of a disaster?

Need another reason? When a dishonest company is allowed to get away with passing off less expensive goods but charging full prices, honest businesses are unable to compete and are denied a level playing field.

According to the Justice Department, Ararkelian ran a company called Great 4 Image, Inc. His company contracted with various federal agencies to produce backpacks, duffle bags, cinch bags, hydration packs, t-shirts and other goods. Each of his company’s contracts required Great 4 Image to comply with the Buy American Act and/or the Trade Agreements Act.

In a prepared statement, prosecutors said, “As part of the civil settlement and guilty plea, Arakelian admitted that he devised and implemented a scheme to defraud the federal government by causing Great 4 Image to import goods, including thousands of backpacks and suspension trainers, that were made in China into the United States and then passing them off as compliant with the Buy American Act and the Trade Agreements Act. In carrying out this scheme, Arakelian made various verbal and written statements to federal officials falsely claiming to have domestically manufactured the goods that he knowingly imported from China.”

Arakelian’s criminal complaint says that as part of the fraud, his company purchased products in China and then “disguised and lied about the products’ place of origin.” The contracts required that at least 50% of the cost of the product must be attributable to American made components. (New executive orders from President Trump may increase the percentage to over 90% for certain products.)

Arakelian faces up to 20 years in prison when sentenced later this year. Court records indicate that he cooperated once caught and pled guilty at his initial appearance. Early acceptance of responsibility most likely means he will receive a lighter sentence.

On behalf of the company, Arakelian will pay civil False Claims Act penalties of $702,000.

The civil prosecution of Arakelian was brought under the False Claims Act. That law allows whistleblowers with inside information about fraud to be paid cash rewards. These rewards range between 15% and 30% of whatever the government recovers from the wrongdoer. In this case that means a potential reward of between $105,300 and $210,600.

Rewards are typically only paid to the first person reporting the illegal behavior. That means any delay could cause someone else to receive the reward.

Collecting a reward requires filing a sealed complaint in federal court. The process sounds daunting but lawyers typically handle the investigation and filing of the complaint. Lawyers that handle whistleblower lawsuits typically do so on a contingent fee basis meaning there is no cost to the whistleblower unless there is a recovery.

As this post is written, tensions are high between the United States and China. For many years, dishonest contractors have attempted to substitute Chinese and other foreign steel in government building projects.

In 2016, the Justice Department intervened in a whistleblower case filed by the Mahany Law whistleblower legal team. Our whistleblower client alleged that Novum Structures concealed foreign made steel components used on a number of federal construction projects. The company paid a $500,000 criminal fine and $2.5 million False Claims Act in civil fines. Our client was awarded $400,000 for stepping up and reporting the illegal conduct.

In announcing the conviction, U.S. Transportation Secretary Anthony Foxx said, “The U.S. Department of Transportation considers compliance with Buy America to be a fundamental requirement when a company is involved in federal projects.  As we work to be good stewards of limited federal resources, the department applauds the Department of Justice and our own Office of Inspector General for the successful prosecution of this case.”

While the complaint is being investigated by the government it remains under seal meaning secret.

Powerful anti-retaliation provisions also protect whistleblowers should the wrongdoer seek to retaliate. Because the cases are under seal, often the wrongdoer doesn’t know the identity of the whistleblower for several years. That is usually plenty of time to secure another job.

Ready to see if you qualify for a reward? Please contact us online, by email or by phone 202-800-9791. We handle cases across the United States. All inquiries kept strictly confidential.