Lawyers Get $3M From $9.5M Settlement Over Unwelcome Sales Calls 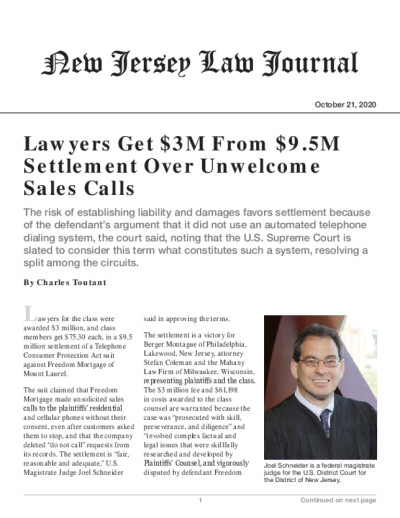 The risk of establishing liability and damages favors settlement because of the defendant’s argument that it did not use an automated telephone dialing system, the court said, noting that the U.S. Supreme Court is slated to consider this term what constitutes such a system, resolving a split among the circuits.

Lawyers for the class were awarded $3 million, and class members get $75.30 each, in a $9.5 million settlement of a Telephone Consumer Protection Act suit against Freedom Mortgage of Mount Laurel.

The suit claimed that Freedom Mortgage made unsolicited sales calls to the plaintiffs’ residential and cellular phones without their consent, even after customers asked them to stop, and that the company deleted “do not call” requests from its records. The settlement is “fair, reasonable and adequate,” U.S. Magistrate Judge Joel Schneider said in approving the terms.

The settlement is a victory for Berger Montague of Philadelphia, Lakewood, New Jersey, attorney Stefan Coleman and the Mahany Law Firm of Milwaukee, Wisconsin, representing plaintiffs and the class. The $3 million fee and $61,198 in costs awarded to the class counsel are warranted because the case was “prosecuted with skill, perseverance, and diligence” and “involved complex factual and legal issues that were skillfully researched and developed by Plaintiffs’ Counsel, and vigorously disputed by defendant Freedom Mortgage Corp.,” Schneider said.

Schneider said the risk of establishing liability and damages favors settlement because of the defendant’s argument that it did not use an automated telephone dialing system. He noted that the U.S. Supreme Court is slated to consider this term what constitutes such a system, resolving a split among the circuits.

“In this regard, nobody knows how the Supreme Court will rule when it addresses the definition of an ATDS. It is possible the decision may bar plaintiffs’ claim in its entirety,” Schneider said.

The size of the estimated payment to each class member, at $75.30, is “on the high side” of settlements in recent TCPA settlements, further supporting the reasonableness of the settlement, and he cited three other cases of the same type in which settlements to class members ranged from $33 to $40.

Schneider also cited measures included in the settlement to reduce the incidence of such violations in the future as “substantial benefits to the class.” They include designation of a senior manager at Freedom Mortgage to assure compliance with the TCPA, reporting to the company’s CEO; additional training about the company’s do-not-call lists; and establishing and implementing procedures to facilitate compliance with do-not-call policies.

The suit, filed in 2017, said Freedom Mortgage had six call centers employing 300 loan officers engaged in telemarketing of refinance opportunities to individuals with home loans originated or serviced by the company. To induce individuals to answer their calls, Freedom often disguised the origin of the phone calls by using “spoofing” methods that make the phone call appear as if it is coming from a local phone number, the suit claimed.

Meredith Slawe and Michael McTigue Jr. of Cozen O’Connor in Philadelphia, who represented Freedom Mortgage, did not return calls about the settlement.