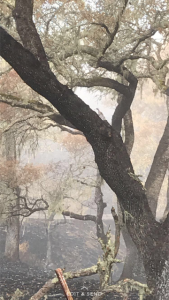 [Updated December 2018] The fires that consumed thousands of acres in Napa and Sonoma Counties are finally extinguished. Forty-two people were left dead. Over one thousand people are homeless. Who is to blame for these tragedies? Our initial thoughts are Pacific Gas & Electric (PG&E).

Early investigations suggest that PG&E company failed to properly trim trees and brush near power lines. When a windstorm swept through the area on October 8th, some of those trees brushed against the energized utility lines. That meant sparks and probably fires.

The California’s Insurance Commissioner says the total damage caused by the October Sonoma and Napa wildfires is $3.5 billion. There really is no way to truly measure the damages, however. Insurance companies and lawsuit recoveries may be able to replace the “bricks and sticks” but not the children who perished in horrible deaths, the photo albums, and the memories lost.

Already, some 100 homeowners have sued PG&E. At least one class action case has been filed. Nothing, however, can bring back the lives that were lost or memories destroyed but residents deserve answers… and compensation.

If the fires were truly acts of God (think of a lightning strike) or the acts of a careless homeowner, PG&E isn’t liable. Every year fires are caused by sparks from rail cars, cigarettes tossed from car windows, unattended campfires, backyard burns that get out of control and even arsonists. A power company or electric utility isn’t responsible for those fires. But they are responsible when the fire is caused by faulty equipment or poorly maintained lines.

As we previously reported, all four of the major Napa and Sonoma fires began on October 8th and all started within an hour of one another. At the time the fires were originally reported, Northern California was experiencing high winds and low humidity. Due to a lack of rain, the leaves and ground were quite dry. In other words, conditions were ripe for wildfires.

California’s Public Utility Commission (PUC) regularly audits utility companies to make sure that they are keeping up with line maintenance and safety repairs. That includes keeping trees away from power lines. In 2015, the PUC audited PG&E’s work in Sonoma County. It found 3,527 maintenance issues that were completed past their scheduled due dates. A similar audit in Napa County in 2013 found thousands more late repairs with another 3,270 still overdue.

Were all PG&E’s repairs and maintenance up to date on October 8th? We can almost guarantee the answer is no. In fact, when we last visited the area we spoke with several linemen in Calistoga there to rebuild after the fire. One told confirmed that delayed tree trimming was probably to blame for the fires.

The linemen know. In fact, everyone is the area suspects the same. And that is why we write this post.

There are plenty of lawyers lining up to handle fire claims. A new cottage industry of experts will develop as both sides scramble to line up scientists, fire experts and others to opine on the cause of the blazes.

We are different. We are a class action firm that looks for insiders. We build our cases from the inside out.  In this case, that means by finding a lineman, field engineer, supervisor, arborist or others with inside information as to the cause of the Tubbs, Atlas, Patrick and the Nuns fires. Somewhere there is a memo or email expressing concern about poor line maintenance and the chance of wildfires. The memo we call a “smoking gun.”

We find the insider first and then either partner with other local class action lawyers or work directly with fire victims. Right now we are looking for insiders.

Currently we are seeking anyone with inside information about the recent Napa fire.

Why become a whistleblower? If you are a lineman or PG&E contractor working near the fire zones, you have probably seen firsthand the devastation. We met with a winery worker who lost his home. He and his family escaped with literally the shirts on their backs.

In Napa, we met an elderly couple fortunate enough to have the time to pack a few things into their truck. To say the couple looked defeated is an understatement. They have no hope. With you, we can offer hope where there is despair.

Not every fire or tragedy is preventable. We think this one was. And we think PG&E has a horrible track record of safety violations. In an effort to keep up their profits and make Wall Street happy, they have let safety fall by the wayside. And they are inadequately staffed. Don’t blame the line workers, those folks do the best they can with the resources they are given.

Becoming a whistleblower means helping folks who have lost everything. It makes helping business owners who lost their livelihood. It means helping workers who no longer have a job since their employer’s business is now a pile of ashes. And it means punishing a company responsible for the deaths of innocent men, women and children.

We won’t jump into the fray like all the other lawyers until we have proof. And you are that proof.

Can we pay you? Whistleblowers in certain government actions are eligible for significant monetary awards. Unfortunately, this is not one of those cases. We can pay for your actual time consulting and we may be able to donate money to a charity but we can’t pay percentage awards to whistleblowers. (No, we didn’t make those rules.)

Often, we can use your talents behind the scenes. (And thereby keep you out of the lime light and your identity secret. Every case is different. The real reason most of our whistleblowers come forward is simply because they want to do the right thing.

This post discusses the Napa fire but we are interested in insiders with information about fires anywhere in the United States caused by faulty equipment and poor line maintenance.

For more information, contact attorney Brian Mahany at , by phone at (414) 704-6731 (direct) or through our online contact form. See also our cornerstone content on the Napa fire and PG&E whistleblowers  and our newest post, How to File a Wildfire Lawsuit and Maximize your Recovery. All inquiries are kept completely confidential.

The person you help may just be a friend, neighbor or loved one… including one you haven’t yet met.