Two Pennsylvania men are headed to prison after pleading guilty to federal fraud charges. Prosecutors say that brothers Thomas and John Buckner defrauded the military. The men own a company called Ibis Tek LLC, a maker of armor for combat vehicles. Prosecutors say that the brothers were behind a scheme to install cheap Chinese made windows frames in Humvees and pocket the profits.

Ibis Tek obtained a multimillion dollar contract to make and install escape windows on Humvees used in combat roles. The contract was awarded by TACOM, short for the Army’s Tank-automotive and Armaments Command.

Because of the proliferation of IED’s around the world, armored combat vehicles are increasingly coming under fire by larger and more sophisticated roadside bombs. Soldiers could get trapped if the doors were blocked as the result of an accident or explosion. To better protect soldiers, the Army decided to retrofit Humvees with emergency escape systems. A Humvee is an armored multipurpose vehicle. (A non-armored version of the vehicle was sold to civilians several years ago and called a Hummer.)

Ibis Tek created a second company called Alloy America to obtain the frames for these window units. Alloy America would source the frames in China and pay $20. They would then invoice Ibis Tek for $70. The invoice would make it appear that the frames were coming from an American company.

Since the Great Depression in 1933, Congress has passed a series of laws designed to promote American jobs by requiring steel and other products used by the government be made in America. The military has its own special Buy America law, the National Defense Authorization Act which contains Buy American requirements. Why? In the event of war, we don’t want to be reliant on foreign factories which may not be accessible. 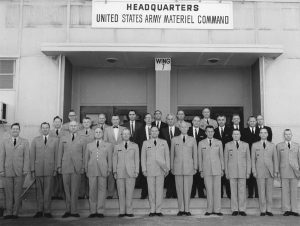 Early Photo of US Army Materiel Command – Photo from US Army

The Buckner brothers didn’t stop at buying cheap Chinese window frames. The government also said they scrapped alloy left over from the manufacturing process but didn’t give TACOM a credit for any of the savings.

If you are thinking that a couple Chinese aluminum window frames can’t be that big of a deal, TACOM says they were cheated out of $6,085,709,00!

What did they do with their ill – gotten gains? Like Al Capone, they didn’t pay taxes on their illegal profits! That resulted in a tax evasion charge and more restitution. Thomas has already paid the IRS $940,000,000 and his brother John paid $980,000,000. All the restitution to both the Army TACOM has also been paid.

The civil case on behalf of the Army for their losses was brought under the federal False Claims Act, a Civil War era whistleblower law. That settlement was for $12,171,580.00 and is in addition to the monies paid to the IRS.

The story doesn’t end with Thomas and John Buckner. They had help on the inside. Prosecutors say that Anthony Shaw of Rochester Hills, Michigan was the Army’s deputy project manager for combat vehicle systems.

During the run up to the 2008 mortgage crisis, Shaw was busy flipping houses on the side. So busy that he owned 90 houses in 2008 when the market crashed and had $400,000 in credit card debt. (We wonder how he had any time to devote to his primary employer, the U.S. Army.) Shaw visited with the Buckners and was paid $1,055,055 “in illegal gratuities” according to the Justice Department. He also didn’t pay taxes on that money.

In announcing the conviction, a Defense Criminal Investigative Service (DCIS) spokesperson said, “Confidence in the integrity of the public officials working in the DoD procurement process and supply chain is of vital importance to all Americans. DCIS is committed to working with its law enforcement partners to investigate any violations of this public trust.”

All three cases were worked jointly by the Justice Department, Army CID, IRS and DCIS.

There are several Buy American laws on the book. All say that the government should source purchases from American companies. Those laws got a big bump in April when President Trump signed an executive order reaffirming the importance of these laws and mandating that all federal agencies strengthen their compliance.

The civil settlement in this case was $12 million.  Why so much? Under the False Claims Act, the courts can triple damage awards and impose fines of up to $20,000+ per each false bill sent to the government. The Buckners and Ibis are lucky they only paid $12 million on a $6 million loss!

The False Claims Act pays whistleblower awards of up to 30% of whatever the government collects from wrongdoers. A violation of the Buy America laws is a violation of the False Claims Act, assuming the government was the purchaser. In this case that means an available award of up to $3,600,000.00. Not a bad pay day for someone stepping forward and doing the right thing.

The IRS Whistleblower Program can also pay whistleblower awards for those who report tax evasion. Those awards are also up to 305. In this case, that increases the total available awards to almost $4.2 million!

Obtaining an award means filing a sealed complaint in federal court. While the government investigates, the complaint remains secret. Ultimately the government must decide if they wish to take over and pursue the case or allow the whistleblowers own lawyers to continue with the case.

To successfully file a whistleblower case and obtain an award, you generally must be the first to file and have inside information. Purchasing agents, job superintendents, freight handlers and senior managers are often in the ideal spot to see Buy America scams.

To learn more, visit our Buy American whistleblower page or contact us directly. All inquiries are protected by the attorney-client privilege and kept confidential. The author of this post, attorney Brian Mahany can be reached directly at or by phone at (414) 704-6731.