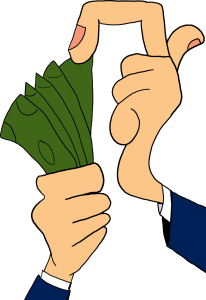 We are living in strange times. This week Russian president Vladimir Putin accused Turkey of helping ISIS launder money. Putin may still be a little sore over Turkey’s recent actions in shooting down a Russian fighter jet that strayed into Turkish airspace. Despite the irony in his claims, there is a nugget of truth in Putin’s accusations.

For now, we can skip the irony of Putin suddenly whining about corporate and government corruption. I can’t think of a more corrupt developed country. His remarks about terrorist funding, however, warrant a closer examination.

In his remarks about the Turkish government, Putin said “We know that Turkey is filling its pockets and allowing terrorists to earn money by selling oil stolen from Syria.” Some estimate that ISIS is selling several million dollars worth of oil per day. Much of that is suspected of flowing through Turkey.

Somehow, those oil sales turn into money which is laundered through a bank and makes it way back to ISIS.

We know from recent U.S. cases that foreign banks are often turning a blind eye to money laundering including money laundering involving suspect drug cartels and terrorist organizations. No bank would intentionally support terrorists such as ISIS but turning a blind eye to the obvious is just as bad. Some huge banks (BNP Paribas, HSBC) have been sanctioned for doing a poor job on enforcing money laundering regulations and OFAC regulations. Short for Office of Foreign Asset Control, OFAC enforces trade sanctions. Unfortunately, we suspect that this is the norm and not an exception.

The story of the day is Putin and Turkey. The real story is how whistleblowers can actually make a dent in real money laundering… laundering money that happens every day in this country when banks turn a blind eye to drug traffickers and terrorists. Whistleblowers fit into the equation because of the important role they play in putting an end to criminal enterprise funding. They see these transactions long before a bank examiner ever does (if at all.)

Helping fight crime and terrorism is reason enough to report money laundering violations. But there is more. Under the federal FIRREA statute, someone who comes forward with information about an American bank violating anti money laundering or OFAC rules can receive a whistleblower award of up to $1.6 million. Foreign banks with U.S. subsidiaries are also liable.

Unlike traditional whistleblower cases filed under the federal False Claims Act, it is much easier to protect one’s identity in a FIRREA case. Because nothing is filed in court, there is nothing for nosy reporters to find.

Unfortunately, the whistleblower award payouts are much smaller. The tradeoff, however, is a better chance of anonymity. For workers in the financial services industry, that is often important.

If you are interested in learning more about FIRREA awards, give us a call. Our whistleblower clients have received over $100 million in awards including FIRREA payouts.

With global terrorism and corporate greed on the rise, it’s time to step forward and identify the banks that turn a blind eye to money laundering and doing business with terrorist nations.

Putin may be engaged in a war of words with Turkey but the problems of money laundering and the dangers it creates are real.

For more information, contact attorney Brian Mahany at or by telephone at (414) 704-6731 (direct). All inquiries are protected by the attorney client privilege and kept confidential. See also our bank money laundering information page to learn how you may qualify for a cash whistleblower award.

Five men are behind bars after being convicted of blatant fraud against taxpayers and the United States. According to court … END_OF_DOCUMENT_TOKEN_TO_BE_REPLACED