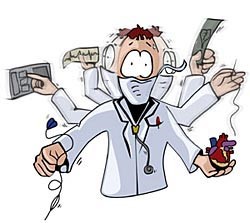 Dr. Roy Heilbron was once affiliated with the Santa Fe Soul Center for Optimal Health. According to the practice’s website, the Center helps patient be “free from sleep issues, weight, chronic headaches, pain, hormonal imbalances, digestive distress, anxiety, depression and so much more.” The Center may have to operate without Dr. Heilbron, however, as he was indicted for both Medicare fraud and wire fraud. If convicted of all counts, Heilbron faces 270 years in prison.

Federal prosecutors claim that Heilbron committed Medicare fraud by performing medically unnecessary tests on patients and then used false diagnosis codes to justify the tests. He would also create false chart notes and data to further bolster the phony diagnosis.

If that wasn’t enough, the indictment also charges that when seeing new patients he would often bill for two visits even though the patient only came in once.

Finally, prosecutors say that Heilbron would bill for procedures that were never performed.

If the indictment is true, Dr. Roy Heilbron managed to commit Medicare fraud in almost every conceivable way.

Heilbron was arraigned and released on his own recognizance. Like all criminal defendants, he is presumed innocent until proven guilty.

Healthcare fraud is a national problem. The FBI claims that Medicare fraud costs taxpayers $80 billion per year. Many Medicare fraud cases come to light when an insider – billing clerk, nurse, or physician – steps forward and reports the fraud.

Thousands of whistleblowers call Medicare’s toll free tip line each year. Although wonderful, calling the tip line does NOT earn you a large whistleblower award. Last year just over 700 people filed lawsuits under the False Claims Act. That Civil War era law allows whistleblowers to earn a reward based on the amount of money recovered by the government.

Since Medicare fraud claims carry triple damages and fines of $5000 to $11,000 per each false submitted claim, fines and penalties can quickly add up.

Are the awards real? Yes! Last year the federal government issued $635 MILLION in awards. Our whistleblower clients have received over $100 million.

Have inside knowledge of Medicare or Medicaid fraud? Give us a call. All inquiries are kept strictly confidential and protected by the attorney – client privilege. For more information, contact attorney Brian Mahany at or by telephone at (414) 223-0464 (direct).