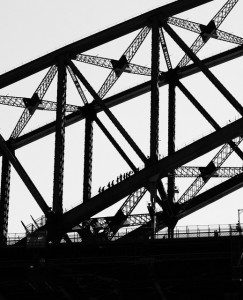 An article last week in the Wall Street Journal discussed what the loss of bridge could mean to a rural community. The Donora – Webster Bridge spans the Monongahela River in western Pennsylvania. Closed by the state in 2009 because of structural weakness, transportation engineers say the bridge can barely carry its own weight. That bridge represents one of the last remaining bridges using pins instead of rivets.

Pennsylvania has more structurally deficient bridges than any other state in the nation. The Donora bridge is 108 years old and simply wore out. A new sleeping killer is out there, however, bridges and other transportation projects built with cheap imported steel.

A series of federal laws has long required transportation and government building projects to use American made steel and components. Exceptions are allowed if the particular product simply isn’t made in America.

Many think these laws are simply designed to preserve American jobs. There is nothing wrong with that goal but mislabeled steel can be very dangerous. We are aware of some transportation projects rejecting federal money simply so they can use Chinese or other imported steel. We also know of companies that simply lie about their components.

California claims it saved more than $400 million by using Chinese steel to rebuild the San Francisco Bay Bridge. The United Steelworkers union opposed that move and may have a point. Controversy has erupted after safety engineers found some steel fasteners have cracked. State officials say the cracking was caused by the fasteners sitting in a puddle and insist the steel itself is properly made. An investigation by the Sacramento Bee, however, found the Chinese contractor made significant quality control errors.

Who is right? We don’t know but at least California’s decision to use Chinese steel was made legally. The state also has inspectors closely watching the Chinese vendors. As noted above, some bridge contractors are deliberately using cheap Chinese steel and lying about its origin. If the steel manufacturing certifications are forged, it’s impossible to know the chemical properties of the steel or its strength.

Without whistleblowers, most government procurement fraud never gets discovered… at least not until there is a tragedy. In Milwaukee, a parking garage facade fell and killed a boy. The steel fastener failed. Ditto for a woman killed in the new Boston “Big Dig” tunnel project.

Whistleblowers are the new American heroes. They are the key to discovering – and stopping – unsafe construction projects.

We simply don’t know how many ticking time bombs there are in our bridges and other projects. One company is paying millions to settle claims brought by a whistleblower that the company had compromised its steel guardrail product.

MahanyLaw is a law firm that represents whistleblowers. Our clients have recovered over $100 million in award monies. We help whistleblowers stop fraud, save lives and also earn the maximum awards allowed. For more information contact attorney Brian Mahany at or by telephone at (414) 704-6731. All inquiries kept confidential.

Ex M&T, Suntrust Broker Indicted We hate these stories. Financial professionals that steal from the vulnerable and … END_OF_DOCUMENT_TOKEN_TO_BE_REPLACED