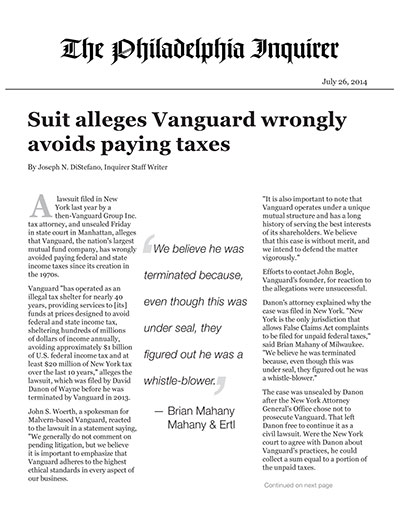 A lawsuit filed in New York last year by a then-Vanguard Group Inc. tax attorney, and unsealed Friday in state court in Manhattan, alleges that Vanguard, the nation’s largest mutual fund company, has wrongly avoided paying federal and state income taxes since its creation in the 1970s.

Vanguard “has operated as an illegal tax shelter for nearly 40 years, providing services to [its] funds at prices designed to avoid federal and state income tax, sheltering hundreds of millions of dollars of income annually, avoiding approximately $1 billion of U.S. federal income tax and at least $20 million of New York tax over the last 10 years,” alleges the lawsuit, which was filed by David Danon of Wayne before he was terminated by Vanguard in 2013.

John S. Woerth, a spokesman for Malvern-based Vanguard, reacted to the lawsuit in a statement saying, “We generally do not comment on pending litigation, but we believe it is important to emphasize that Vanguard adheres to the highest ethical standards in every aspect of our business.

“It is also important to note that Vanguard operates under a unique mutual structure and has a long history of serving the best interests of its shareholders. We believe that this case is without merit, and we intend to defend the matter vigorously.”

Efforts to contact John Bogle, Vanguard’s founder, for reaction to the allegations were unsuccessful.

Danon’s attorney explained why the case was filed in New York. “New York is the only jurisdiction that allows False Claims Act complaints to be filed for unpaid federal taxes,” said Brian Mahany of Milwaukee. “We believe he was terminated because, even though this was under seal, they figured out he was a whistle-blower.”

The case was unsealed by Danon after the New York Attorney General’s Office chose not to prosecute Vanguard. That left Danon free to continue it as a civil lawsuit. Were the New York court to agree with Danon about Vanguard’s practices, he could collect a sum equal to a portion of the unpaid taxes.

Danon said other Vanguard principals who disagreed with the company’s tax position had also left Vanguard.

Danon has also talked with IRS and Securities and Exchange Commission investigators about his allegations, The Inquirer has learned. The SEC and IRS typically do not comment on possible investigations.

In the lawsuit, Danon details his allegation that Vanguard has been illegally avoiding taxes.

Section 482 of the Internal Revenue Code, and most state’s laws, require that transactions between related companies take place at the same price as if the companies were unrelated.

Instead, Danon contends, Vanguard provides services to its mutual funds “at artificially low, ‘at-cost’ ” prices. “As a result, Vanguard shows little or no profit and pays little or no federal or state income tax despite managing funds with nearly $2 trillion in assets.”

This is illegal for the same reason rich people are not allowed to sell property to their children at artificially low prices to avoid inheritance taxes, the lawsuit says. It is a “bedrock tax principle” and what lawyers call “black-letter law,” generally accepted by lawyers and courts, the suit adds.

The reserve is under Vanguard Group control and used for Vanguard purposes, and has been funded by Vanguard mutual fund fees. So, Vanguard should pay taxes on it, the suit contends.

Vanguard’s no-tax structure has enabled the company to underprice competitors and grow faster than other companies, the lawsuit argues. Vanguard has been the leader in low-cost mutual funds, it adds, because “it has flouted tax rules.”