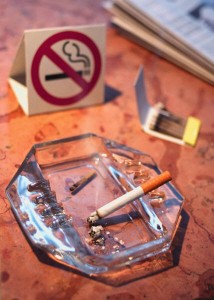 Cigarette and tobacco tax evasion is big business. States lose tens of millions each year to smugglers who bring in cartons of cigarettes from low tax states. The really sophisticated criminals use counterfeit tax stamps to hide their tracks.

We have been following the story of Syed Bokhari for over a year. In 2014, CBS news in Boston reported that Bokhari was the subject of a raid by special agents assigned to the Bureau of Alcohol, Tobacco and Firearms. At the time the story broke, no criminal charges were pending. After a year and a half, last week Bokhari was indicted for his alleged role as the mastermind of a multimillion dollar tobacco tax evasion scheme.

The U.S. Attorney in Boston released a statement indicating Bokhari had been charged with a 32-count Indictment for charges of conspiracy to commit wire fraud, wire fraud, trafficking in contraband smokeless tobacco, money laundering, and violation of the Prevent All Cigarette Trafficking (PACT) Act. Prosecutors say that he transported tobacco products from low cost states to warehouses in Connecticut and Massachusetts where it was sold for below market prices. New England states have some of the highest cigarette taxes in the nation.

The indictment covers a span of 4 years between 2008 and 2012. During that time, the Justice Department says Massachusetts and Connecticut lost a combined total revenue of $43 million. It is unknown if both states will bring their own tax evasion charges.

In a prepared statement, U.S. Attorney Carmen Ortiz said, “This indictment exposes a form of tax evasion that deprives states like Massachusetts and Connecticut of badly needed revenue that pays for essential government services like education, public safety, and infrastructure. When tobacco tax laws are evaded, as the defendant is alleged to have done in this indictment, honest tobacco distributors suffer, as does the honest taxpayer.”

Ortiz’ statements about honest taxpayers being hurt certainly ring true. Businesses that buy the untaxed cigarette taxes typically mark them down a few cents to lure in customers. Only a fraction of the tax “savings” is passed on to the consumer. Typically, the unscrupulous wholesaler and the retailers pocket most of the savings. That puts honest store owners at a severe competitive disadvantage.

The IRS released a statement saying, “This indictment highlights the fact that tax evasion in any form is not a victimless crime. We will use all lawful means to identify and prosecute those who evade their taxes, whether it’s excise tax on tobacco products or income taxes.”

In 2018, after years of legal wrangling, Bokhari asked a federal judge to dismiss the indictment against him. He claimed he was the victim of a “vindictive prosecution.” The court denied his motion in 2019. Just as the trial was set to begin, the COVID-19 pandemic shut down courtrooms around the country. Bokhari’s trial is now scheduled to begin on June 7, 2021.

Most tobacco tax evasion cases are brought by state revenue departments. The cigarettes and tobacco products sold by Bokhari had already been taxed at the federal level. States are hampered when investigations cross state lines. What is interesting about this case is the cooperation between state and federal authorities and the use of federal anti-money laundering and wire fraud charges to combat what is essentially evasion of state taxes.

If convicted of all counts, Bokhari could spend the rest of his life in prison. Last year after the raids, Bokhari’s lawyer claimed his client was innocent. According to WBZ Boston, his lawyer said, “Syed Bokhari is a person completely innocent of any wrong doing. This is some far-fledged, unprecedented, and again I contend, unprincipled theory that the supplier is liable for his customers’ tax failures.”

Cash Rewards for Information on Cigarette and Tobacco Tax Evasion

States rely on cigarette tax stamps and wholesaler audits to insure states taxes are paid. Stamps are easily counterfeited, however, and non-cigarette tobacco products are even harder to track. Tobacco tax evasion cases are rarely reported but happen throughout the country, particularly in high tax states.

As of this update (December 2020), New York and Connecticut are tied as the states with the highest cigarette tax rates in the nation. ($4.35 pack). Rhode Island is a close second at $4.25 per pack. (If you look at U.S. territories, Puerto Rico takes the top spot at $5.10 per pack).  None of these amounts include local cigarette taxes. When a pack of smokes in Missouri is taxed at just 37 cents yet over $6 bucks across the border in some Illinois cities it is easy to see why counterfeiting stamps is so profitable.

Approximately 30 states have state whistleblower reward laws. Unfortunately, many of those laws are limited to Medicaid. Some of the higher population states that also have big tobacco taxes (Illinois and New York are examples) have whistleblower rewards  that include taxes. In states with such rewards, the going rate for rewards is between 15% and 30% of whatever the state collects.

About the author. Brian Mahany is a whistleblower lawyer. He is former state revenue commissioner for the State of Maine and a former participant in a Federation of Tax Administrators tobacco tax evasion roundtable. His firm has handled whistleblower cases in approximately 40 states. Brian can be reached at or by telephone at 202.800.9791. All inquiries kept in complete confidence and subject to the attorney -client privilege.

We also invite you to read our 11 Step Guide to Becoming a Whistleblower. It’s free and we don’t collect any information from you.