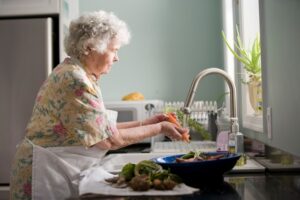 [Post updated through 2021] The Treasury Department’s Financial Crimes Enforcement Network, better known as FinCEN, has joined the fight against financial exploitation of the elderly.  FinCEN has long been the lead law enforcement agency detecting and combating money laundering. Because banks, retailers and many others are required to report large cash transactions, the agency is uniquely positioned to use its data gathering capabilities to look for signs of elder fraud.

Because bank tellers often have a very personal relationship with their older clients, they are uniquely positioned to know when things don’t seem right.

Under the advisory guidelines, banks are encouraged to report erratic or unusual banking transactions involving elderly clients. These include:

Bankers are also encouraged to pay closer attention to both elderly customers and their caregivers.  Common red flags include:

By being able to electronically compare reports from other banks and financial institutions such as brokerage firms, law enforcement may be able to more quickly see a pattern developing involving an elder with accounts in multiple places.

Of course, as with any government monitoring program there are privacy concerns.  With six months of actual experience, however, it seems most bankers are exhibiting good common sense and not reporting every grandmother who wires money to a family member. The initial results suggest that bankers are good at understanding when their customers may be in trouble.

Elder abuse and elder financial fraud are huge national problems. Earlier this year actor Mickey Rooney testified before Congress as to how he had been victimized by a step-son. Rooney, age 90, ultimately obtained a restraining order from a California court after he claimed he was both financially and physically abused by his step-son.

If you or a loved one are the victim of elder abuse, speak up! A government study says that 3 out of 20 non-institutionalized elders are the victims of some type of abuse each year. Those shocking numbers won’t decrease until more people come forward. Most counties have resources to help elders in need of assistance. Law enforcement is getting better at understanding the depth of the problem and taking action as well. If you have no one to turn to, call the police or even a trusted family friend.

In 2019, FinCEN released an analysis of suspicious activity reports associated with elder financial abuse. In 2013 monthly reporting stood at 2,000 nationwide but by 2019 that number increased to 7,500 monthly. An analysis of the data revealed some interesting trends.

The fraud lawyers at Mahany Law represent all types of fraud victims, including elder fraud.  If you have been victimized by a family member or caregiver, don’t be ashamed to call us.  We handle cases where the fraudster was a licensed professional, lawyer or stockbroker. To learn more, visit our sister Elder Financial Fraud website. Ready to see if you have a case? Contact attorney Brian Mahany online, by email or by phone at 202-800-0991.