A just released report shows the IRS collected $400,000,000,000 less in 2009 than in 2008. (Yes, that is 400 billion.) No surprise there – the economy remains in a slump and placing food on the table occupies a higher importance than paying taxes for many families. The same report, released by the Treasury Inspector General […]

[Updated Oct. 2018] Government tax authorities asking banks and credit card companies for information on foreign account holders is hardly news these days. The I.R.S. does it, so do Germany, Britain and many other countries. Officials want to know when their citizens transfer wealth overseas or open foreign accounts. Generally the practice is legal if […]

In January I wrote a piece titled “Do You Know Who Is Handling Your Money?”  That piece discussed how TV star Willie Adams (star of reality television show “Broke and Famous”) was now licensed to be a financial planner. Willie isn’t alone. The newest entrant in my personal “Hall of Shame” is Kevin Trudeau. Trudeau […] 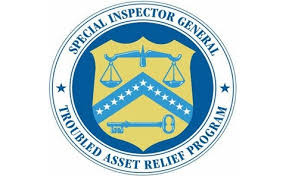 Can Someone Transfer Their Assets to Avoid A Debt? No! A fraudulent conveyance, also known as a fraudulent transfer, is an attempt to avoid debt by transferring money to another person or company. It is generally a civil matter meaning that one cannot go to jail for it, but in some jurisdictions there is […] 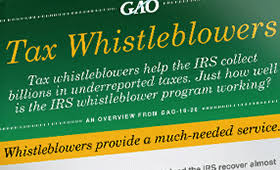 In 2009, we represented an individual who was criminally charged by the IRS for fraudulent tax returns. Although we achieved a great result for the client, his attempt to deduct his wife’s breast enlargement surgery was rejected by the U.S. Tax Court. It turns out, however, that removal of one’s penis is tax deductible.  Why […]

How Well Do You Know Your Financial Professional? If you are like many people, the answer is “not very well.” Recently I blogged about the Financial Industry Regulatory Authority (“FINRA”) and the gaps in their “Broker Check” system.  Since writing that piece, FINRA has begun correcting some of the problems. Except for stockbrokers, it is […]

[Ed. Note: Although this post is still valid, newer posts on accounting malpractice and legal malpractice can now be found on our sister website, U.S. Legal Malpractice. You can reach that site by clicking the link above.] By now, few are shocked when the nightly news breaks a story of a new Ponzi scheme. Not […]

[Updated 2020] Tax identity theft is a huge problem in this country. According to the most recent statistics, over 15 million Americans had their identities stolen last year.  Just five years ago that number was 9 million per year. So who can we trust to protect us? Unfortunately, not the IRS. Stories of hackers breaking […] 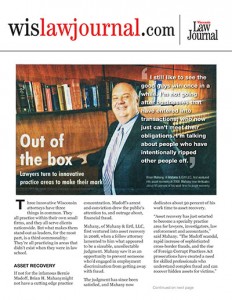 Three innovative Wisconsin attorneys have three things in common. They all practice within their own small firms, and they all serve clients nationwide. But what makes them stand out as leaders, for the most part, is a third commonality: They’re all practicing in areas that didn’t exist when they…

Most of the posts in this blog detail current cases and trends in the law. Today we are doing something different. We are sharing some of wisdom on how to prove fraud using tax returns. If you are suing someone for fraud, it is fair to assume that the person you are suing is dishonest. […]

America’s least populated state is Wyoming with just over a half million people, the U.S. territory of Guam has even fewer, … END_OF_DOCUMENT_TOKEN_TO_BE_REPLACED