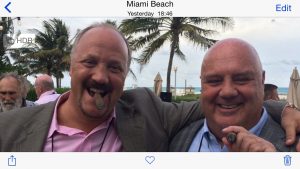 If You Just Collected $104 Million, You Would be Smiling and Smoking a Cigar in Miami Beach Too! [Bradley Birkenfeld and Whistleblower Lawyer Brian Mahany]

Meet Bradley Birkenfeld. Bradley is a disgraced former Swiss banker that spent about 2 and a 1/2 years in prison for helping Americans evade taxes and hide their money in Swiss accounts.  He is out of jail now and is getting a check from Uncle Sam  for $104 million. What did he do to earn that kind of money? He reported on his former clients and turned over their names to the IRS.

By my quick calculation, Birkenfeld earned about $4900 per hour while in prison.  Even while sleeping.  Whether or not you think convicted felons should received millions of dollars in taxpayer money, this week’s award sends a very clear message. The IRS is very serious about ferreting out taxpayers with unreported accounts. With an award that size, bankers in every country in the world are considering tonight whether they should turn over your name to the IRS.

The IRS whistleblower problem is designed to encourage people to report tax fraud. Whistleblowers can receive up to 30% of whatever the IRS collects from the taxpayer. And that includes interest and those huge penalties too.

By paying cash to people who come forward (the IRS does withhold, however), the government hopes that the monetary incentive is enough to overcome the hassle that comes from being a whistleblower. Forget about hassle, getting paid over a $100 million dollars is enough money to cause many people to turn in their own mother.

In its simplest terms, federal law requires U.S. taxpayers (that includes dual nationals, Americans living abroad and green card holders) to notify the government if they have $10,000 or more in foreign bank or brokerage accounts. Dividends, interest and capital gains get reported on one’s income tax returns just like if the account was in the United States. The account itself is reported on an annual Report of Foreign Bank and Financial Accounts or “FBAR.”

Owning a foreign account is completely legal as long as reported and taxes paid on any interest or dividend income.

Failing to properly report the account could result in penalties of $100,000 per year or 50% of the account’s highest balance for each the account was unreported. Willful violators also face prison.

The IRS is offering an amnesty plan for people have not properly reported. If you knew about the law and just ignored it hoping you would not get caught, the amnesty program is the best deal in town.

Non resident taxpayers, people who can prove their actions were not willful and folks with small accounts may do better outside of amnesty. Finding a qualified tax lawyer to walk you through the choices is your best bet. Whatever you decide, do not ignore the problem. With the IRS publicly paying convicted felons tens of millions for the names of foreign account holders, do not expect your identity to remain private for long.

Why does this matter?

The IRS operates on a first contact policy basis. If they find you first, all bets are off and you are not eligible for the amnesty programs. That means if a whistleblower turns you in first, all bets are off. [Despite record fines and criminal prosecutions we are amazed at how many taxpayers would still rather take their chances.]

We like whistleblowers, even ones who broke the law but now want to come clean. Rather than spend his life looking over his shoulder, Bradley Birkenfeld stepped forward. He went to jail for 31 months but the IRS also told the court that because of his help they collected $780 million from UBS Bank. [The IRS would later go to collect $100 billion from people hiding money in foreign accounts.]

Bradley went to prison almost a decade ago. Today, there is better cooperation between the Justice Department and IRS. And since the IRS operates on a voluntary compliance program, you are less likely today than Birkenfeld was but only if you step forward first

No one likes to pay taxes. We get that. But most of us hate when someone else cheats on his or her taxes making the rest of us pick up the slack.

If you have inside information about tax fraud, especially if that fraud has a value of $2 million or more, contact us. The next cash reward could be yours. Foreign bankers are welcome to call as well. In most instances, the IRS can keep your name confidential.

The IRS whistleblower lawyers at Mahany Law have helped many U.S. whistleblowers file claims. Our whistleblower clients have received over $100 million in rewards. And for tax whistleblowers, you don’t even have to be a citizen or resident to collect a reward. We will gladly help you determine if you qualify for a reward and explain your options without charge and with the security of knowing that all inquiries are covered by the attorney – client privilege.