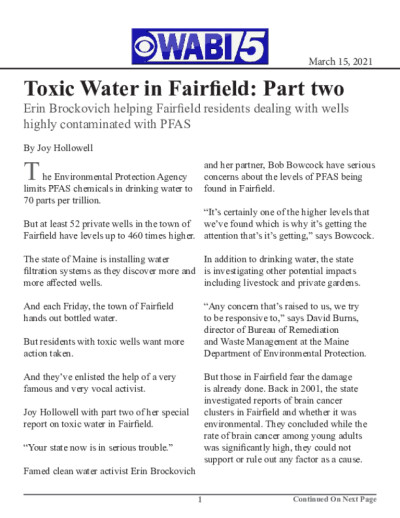 But at least 52 private wells in the town of Fairfield have levels up to 460 times higher.

The state of Maine is installing water filtration systems as they discover more and more affected wells.

And each Friday, the town of Fairfield hands out bottled water.

And they’ve enlisted the help of a very famous and very vocal activist.

Joy Hollowell with part two of her special report on toxic water in Fairfield.

“Your state now is in serious trouble.”

Famed clean water activist Erin Brockovich and her partner, Bob Bowcock have serious concerns about the levels of PFAS being found in Fairfield.

“It’s certainly one of the higher levels that we’ve found which is why it’s getting the attention that’s it’s getting,” says Bowcock.

In addition to drinking water, the state is investigating other potential impacts including livestock and private gardens.

“Any concern that’s raised to us, we try to be responsive to,” says David Burns, director of Bureau of Remediation and Waste Management at the Maine Department of Environmental Protection.

But those in Fairfield fear the damage is already done. Back in 2001, the state investigated reports of brain cancer clusters in Fairfield and whether it was environmental. They concluded while the rate of brain cancer among young adults was significantly high, they could not support or rule out any factor as a cause.

“It’s a high enough concern that our priority is towards expansion of public drinking water,” says Fairfield Town Manager Michelle Flewelling. “That really is the only solution that has presented itself at this point and time.” The town is working on grants to make that happen and try and avoid increasing property taxes. “We do have to take care of the entire municipality,” she says. “And while 1 group of residents may very well want this service, there’s another group of residents who very well may not want to pay for it.”

Flewelling says they were alerted last October by David Burns with the DEP that a residential well in Fairfield tested high for PFAS chemicals.

According to Flewelling, there’s little the municipality can do to help affected residents directly.

“These are private wells and we have to be very careful about spending taxpayer dollars for personal gain,” she explains. “So to help an individual with their private well is something that the law doesn’t allow us to do necessarily with taxpayer dollars.”

To date, Fairfield and the Maine Department of Environmental Protection provide drinking water to 54 property owners. They have the potential to receive 938 gallons of water a week, according to Flewelling. She notes the town can’t actually purchase the water with taxpayer dollars so the state picks up most of the tab. Additionally, donations have come in from the area including Sunset Flowerland and Greenhouse in Fairfield that sold poinsettias at Christmas time to raise money. The town also received leftover funds from the town of Skowhegan after they dealt with a Boil Water Order in November.

As for concerns by residents that the value of their homes and property will decline due to contaminated wells, Flewelling says right now, it appears people are still coming to the area believing their water is now even cleaner because of the filtration systems installed by the state. “We haven’t had any indications yet that it’s going to stop the move to location,” she says.

According to the Maine DEP, the PFAS comes from sludge spread on farm fields for decades.

Brockovich and Bowcock believe the water filtration systems are a good start by the state. But ultimately, soil scrapings and removal, health and welfare surveys and more testing will also have to take place.

“Whether you like it or not, you ingest quite a bit of dust on a bike ride on a sunny afternoon in Maine,” says Bowcock. “It’s just a reality that this stuff becomes airborne, it’s all over.”

Brockovich credits residents in Fairfield for taking a stand. “I think Fairfield is responding well,” she says. “They’re organizing and they’re prepared to show up.”

She also has a message for the state of Maine.

“You better be taking a look at the polluters in your state and going to them for clean up costs,” says Brockovich.

But just who is responsible?

“The bio-solids were spread out on those fields from sometime around the last 1970s, maybe 1980 through 2003 from the Kennebec Sanitary Treatment District facility,” says Burns.

In a statement to WABI by David Madore, Acting Deputy Commissioner of the Maine Department of Environmental Protection, he states, “The Department has been aware that Huhtamaki contributes a significant industrial wastewater component to KSTD. This is included in language in KSTD’s MEPDES permit, along with references to other industrial inputs.”

In a statement to WABI, Huhtamaki says, “Our commitment to protecting the environment is something we take very seriously everywhere we operate. In Waterville, as in all locations, we comply will all applicable environmental and product safety laws and regulations. And while we are tracking and reviewing developments with PFAS related matters, we have not been contacted by authorities regarding the matter.”

Fairfield resident Nathan Saunders is suing Sappi Paper Mill for allowing these dangerous chemicals to contaminate his property and drinking water. Saunders is represented by Brian Mahany with MahanyLaw out of Milwaukee, Wisconsin. In an email to WABI, Mahaney says, “At this point our main focus is identifying other groups of folks who may have been impacted by contaminated biosolids. We don’t think that these dangerous compounds are limited to a single farm in Fairfield. We are also working with several individuals who have suffered specific health outcomes. We will be filing individual lawsuits for those who have cancer, kidney disease or other health problems associated with PFAS contamination.”

“There is also a second material that was spread on some of the fields between 2006 and 2015,” says Burns.

That came from the Soil Prep, Inc. facility in Plymouth, according to the DEP. The state says “full consideration” must be given to this second source as well.

WABI spoke to Soil Prep, Inc. Company President Phil McCarthy. He calls it an “industry and social issue” adding that he’ll let the state of Maine move forward with its investigation before he makes any further comments,

“It’s not a matter of blame, to me, it’s a matter of learning new information about a material that you didn’t know about in the past,” says Burns. “And I think certainly the companies that produced this material need to be looked at because they were aware of what was in their products and what the concerns were and that information had not been shared out with others.”

Right now, the state says it’s priority is identifying the extent of contamination. They’re beginning to look at other central Maine towns and hope to start testing in the next couple of months.

“The Department’s focus has been to emphasize investigation of the extent of contamination in residential wells nearby to the licensed fields where sludge was land applied in order to provide temporary bottled water followed by filter treatment systems to remove the PFAS contaminants,” says Madore in an email to WABI. “Simply stated, this focus ensures impacted residents have water that is safe to drink. This remains the Department’s priority in Fairfield. There will be time at a later date to consider all of the KSTD inputs, the two types of materials land-applied, and discuss the potential for responsible parties. That evaluation and discussion can be a lengthy process and will not immediately result in water that is safe for the residents to drink.”

“We will get to these sites, it’s a matter of resources and time,” says Burns. “We are continuing to prioritize sites based on as review of historical records. We’re not going to stop based on the results in Fairfield.”

It is difficult for homeowners to test their wells for PFAS, according to the Maine DEP. You can easily contaminate the sample just by the clothes you are wearing if they too, contain PFAS or were washed in laundry detergent containing the chemicals. If you’d like more information on testing your private well for PFAS, log onto https://www.maine.gov/dep/spills/topics/pfas/fairfield/well-test-request.html

The town of Fairfield provides weekly updates regarding the PFAS investigation on its website https://www.fairfieldme.com/town/visitors.php/public-notices/DEP-PFAS-Info-Links-Contacts

The Maine DEP also dedicates an entire pages on its site to the ongoing analysis https://www.maine.gov/dep/spills/topics/pfas/fairfield/index.html

In order to get paid by Medicare, Medicaid or Tricare, healthcare professionals must be properly credentialed. When you go to … END_OF_DOCUMENT_TOKEN_TO_BE_REPLACED