Fairfield resident Nathan Saunders filed a class-action suit Friday, saying the Sappi mill is the source of high levels of ‘forever chemicals’ in a growing number of Fairfield area wells. 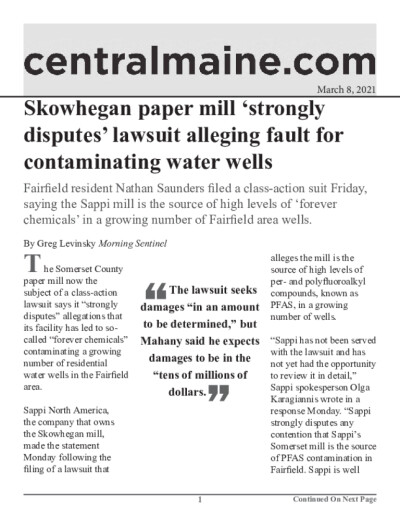 The Somerset County paper mill now the subject of a class-action lawsuit says it “strongly disputes” allegations that its facility has led to so-called “forever chemicals” contaminating a growing number of residential water wells in the Fairfield area.

Sappi North America, the company that owns the Skowhegan mill, made the statement Monday following the filing of a lawsuit that alleges the mill is the source of high levels of per- and polyfluoroalkyl compounds, known as PFAS, in a growing number of wells.

“Sappi has not been served with the lawsuit and has not yet had the opportunity to review it in detail,” Sappi spokesperson Olga Karagiannis wrote in a response Monday. “Sappi strongly disputes any contention that Sappi’s Somerset mill is the source of PFAS contamination in Fairfield. Sappi is well known for its record of environmental stewardship at the Somerset mill and at all of its manufacturing facilities.”

The lawsuit alleges Sappi’s Somerset Mill in Skowhegan is the source of PFAS, dubbed “forever chemicals” in Saunders and other Somerset County residents’ wells. The lawsuit alleges that the PFAS came from biosolids spread in the form of sludge from the mill’s wastewater treatment plant.

The lawsuit seeks damages “in an amount to be determined,” but Mahany said he expects damages to be in the “tens of millions of dollars.”

Introduced in the 1940s, PFAS are a group of man-made chemicals that were commonly used in household products for their water, grease and stain-resistant nature.

Nicknamed “forever chemicals” because they do not break down easily, exposure to these chemicals has been linked to various health issues. Some studies link PFAS exposure with an increased risk for certain cancers.

Since February of 2020, Maine’s Department of Environmental Protection has found a growing number of local water wells with high concentrations of the chemicals. To date, 45 wells in Fairfield with levels of PFAS compounds higher than the EPA’s maximum limit of 70 parts per trillion have been identified by state officials, according to Maine Department of Environmental Protection Acting Commissioner David Madore. The department is awaiting test results for 20 more wells.

On Jan. 13, Saunders’ well was found to be contaminated with PFAS at 12,910 parts per trillion.

“These things have to be proven, but there is a significant impact to our family that we are trying to understand more about,” said Saunders, a 33-year Fairfield resident, on Monday. “The possibility of these chemicals causing significant issues in our family makes me want to investigate this further to see what’s really happening.”

The class-action suit is open for anyone to join who experienced damages related to the PFAS contamination of local wells. The suit is still just Saunders, but Mahany said the firm is hearing from various people, including a concern from parents about exposure for their children. If the court certifies the class-action suit, notice will be sent out to those in the area.

Mahany also intends on pursuing individual suits for those impacted with health issues who believe it is related to PFAS exposure from the mill.