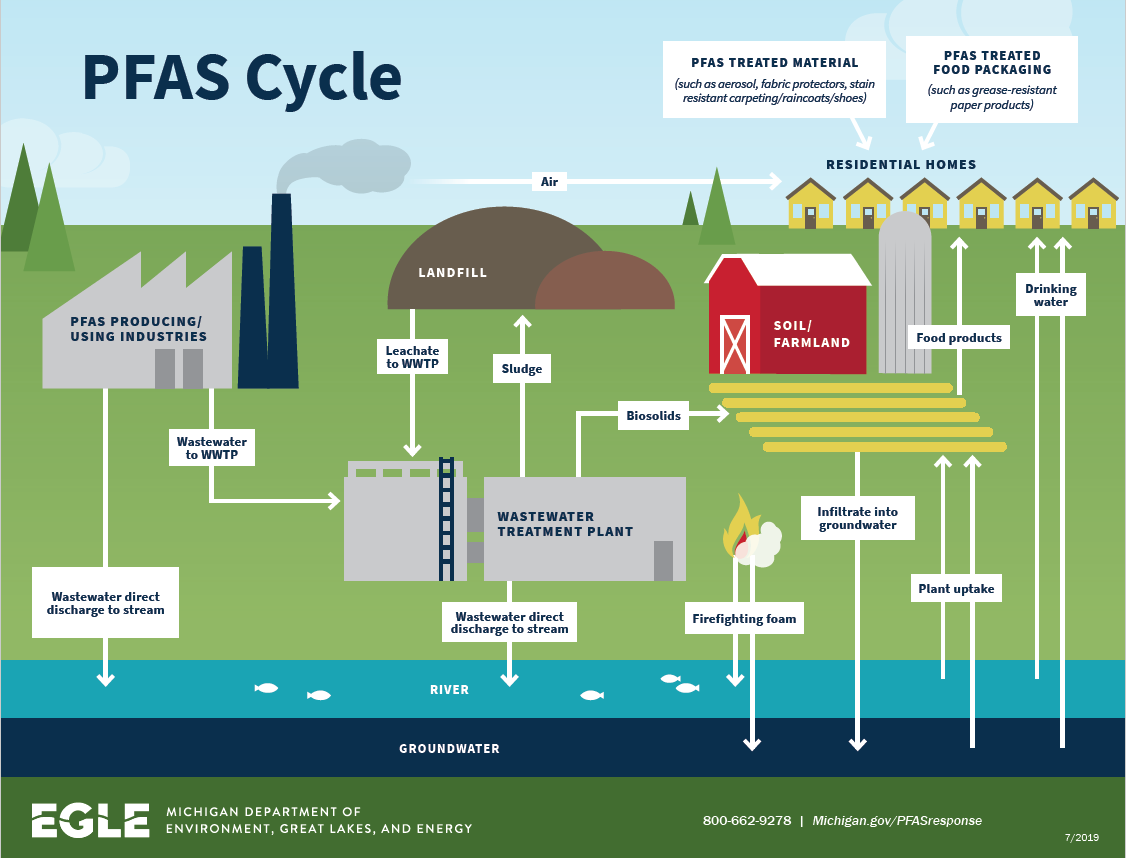 In 2018, the Environmental Defense Fund submitted a Freedom of Information Act request to the FDA. What it found was shocking: in 2009 and 2010, the agency ignored warnings from PFAS manufacturers about the imminent threat of PFAS in papermill wastewater.

In their yearly environmental assessments, Daikin America and Chemours told the FDA that massive amounts of the PFAS they manufactured were polluting land and water in the vicinity of paper mills.

As revelations about the FDA´s failure to protect Americans from dangerous PFAS made headlines, the EPA feared a “public relations nightmare” over the discrepancy between the level of PFAS in drinking water tolerated by the EPA and the Department of Health and Human Services’ more stringent guidelines.

In 2021, we still don’t have federal legislation in place to protect Americans from the toxic level of PFAS in paper mill wastewater, which has polluted drinking water sources all over the country, putting at least 200 million Americans at risk.

When the EDF investigated the impact of PFAS pollution, it found a high level of PFAS in the water of nine rivers flowing through 17 states. The percentage of the chemical polluting these waterways was much higher than what the EPA considered safe.

At the time, an EDF official stated their findings suggested “that papermills may present a significant source of PFAS,” and “Communities across the country need to know where PFASs are being used and the environmental impact of these uses.”

Three years later, we are still waiting for policy changes and more environmental protection. For many Americans, the impact of PFAS on their daily lives is devastating. And they are beginning to sue the culprits.

Water districts that sued companies over PFAS pollution have secured over one billion dollars in settlements. Individuals who developed cancer and kidney problems due to PFAS exposure are also filing lawsuits and reaching multimillion-dollar settlements. In January 2021, a group of Peshtigo, Wisconsin, residents reached a $17.5 million settlement with three companies over PFAS contamination in the Peshtigo and Marinette areas.  (If you or a loved one has cancer or developmental disabilities and have PFAS in your drinking water, visit our PFAS lawsuit information page for more information and our short video.)

Per- and polyfluoroalkyl substances (PFAS) are synthetic compounds used in wide variety of consumer products including nonstick pans and pizza boxes. From tap water in Michigan to residential wells in Maine and lakes in North Carolina, alarming levels of PFAS have been found everywhere in the country.

Known as “forever chemicals” because they do not easily break down over time, PFAS are water soluble and can easily contaminate groundwater. No matter how much chlorine is added to drinking water systems, it cannot remove PFAS. And once forever chemicals enter the human body, they never leave.

At the center of PFAS pollution clusters, there is often a papermill. PFAS’ nonstick quality has made it a preferred chemical for the interior of pizza boxes, paper plates and coasted paper. As paper mills manufacture these boxes, they discharge massive amounts of PFAS-rich wastewater into waterways and landfills. For many years, paper mill sludge has also been used as a fertilizer at neighboring farms.

According to the Agency for Toxic Substances and Disease Registry and other research organizations, PFAS have been linked to:

PFAS are commonly found in fire retardant foams. For this reason, military bases in many U.S. locations have become epicenters of widespread PFAS pollution.

‘Forever chemicals’ have been used in U.S. manufacturing since the 1950s. While the nonstick-pan material Teflon, which contains PFAS, was banned years ago, other variations are still present in many products. In fact, hundreds of PFAS compounds are still in use in the U.S. today, and only two, PFOA and PFOS, are banned.

According to data collected by the Environmental Working Group, the U.S. states with the largest number of drinking water systems contaminated with dangerous levels of PFAS are:

Using a new testing method, Harvard researchers recently found previously undetectable PFAS in six watersheds (Childs, Quashnet, Mill Creek, Marstons Mills, Mashpee, and Santuit) on Cape Cod. Pollution in the region is associated with the use of firefighting foam at facilities like the Joint Base Cape Cod and the Barnstable County Fire Training Academy.

The new water testing technology could be revolutionary, as the EPA only tests for about 25 compounds from the PFAS family, which actually comprises thousands.

PFAS contamination in Maine recently made headlines as dairy farmers, including Fred Stone from Stone Ridge Farm, discovered industrial sludge had polluted their land, causing cows to produce milk with high levels of PFAS. Other Maine residents who live close to paper mills have reported long and devastating illnesses caused by years of exposure to dangerous levels of the chemicals in their private water wells.

Recently, groundwater in Denver, Colorado, was found to contain PFAS levels nearly 3,000 times higher than the federal advisory limit. Meanwhile, in New Jersey, the EPA forced a Solvay Plant to stop using a dangerous PFAS compound, but the company replaced it with a lesser-known and equally dangerous group of PFAS, which were found in high concentrations in the vicinity of the plant. In October 2020, the State of New York sued Solvay over the issue.

In Michigan, there are at least 11,000 sites contaminated with PFAS, according to estimates. The situation has been described as the biggest environmental crisis in the state in 40 years. In August 2020, the State of Michigan approved a new rule limiting seven PFAS compounds in municipal drinking water, hardly sufficient considering the amount of dangerous PFAS in use today.

In Kentucky, researchers testing water systems connected to the Ohio river found PFAS in every sample. When testing 81 water plants that serve half of the state’s population, they detected dangerous PFAS levels in samples coming from 50 percent of the facilities.

For every U.S. state, there is a tragic PFAS contamination story, and very little has been done to fix the problem.

PFAS legislation efforts have failed to protect Americans. Legislators are so far behind that they are only beginning to demand federal funds for PFAS testing.

In 2018, senators from both parties introduced Bill S. 3382, which would “require the Director of the United States Geological Survey to perform a nationwide survey of perfluorinated compounds [PFAS].” The legislation vowed to allot $45 million to soil and water testing to detect PFAS, but died in Congress. It was later reintroduced by Michigan Senator Debbie Stabenow as “S. 950 (116th): PFAS Detection Act of 2019” but did not receive a vote.

Although the EPA has issued guidelines, there are currently no enforceable federal limits for PFAS in drinking water. Moreover, the EPA guidelines only reference PFOS and PFOA, leaving out thousands of toxic PFAS. Independent testing has found hundreds of these compounds in the environment.

Maine Governor Janet Mills recently wrote a letter to her state’s four members of Congress, asking them to secure funds to address PFAS pollution in Maine and beyond. Governor Mills referred to the dangerous chemicals as “a national problem that ultimately requires a federal response.”

The Governor is currently testing water, milk, meat, and treated sewage to detect PFAS contamination. With more funding, she believes, Maine could expand these efforts and take remedial action.

Describing PFAS as an “emerging threat,” Mills stated, “PFAS contamination is not a Maine problem. . . we encourage the federal government to act quickly and decisively in its own right.”

Senator Stabenow’s and Governor Mills’ initiatives are commendable, but the fact remains that funding for PFAS testing is still shockingly inadequate. If it weren’t for PFAS lawsuits, we might never learn that Americans are getting sick because they have been drinking PFAS-contaminated water for decades.

One can only hope that the surge in PFAS lawsuits all over the country will eventually prompt our government to restrict the use of the chemicals, expand testing, and install purification systems to ensure drinking water maintains non-toxic levels of PFAS.

Were You Injured Because of PFAS Exposure?

If you or a loved one was exposed to PFAS contamination and were subsequently diagnosed with a serious disease or injury, you may be entitled to compensation for your injuries and other losses. Homeowners and farmers with contaminated soil or wells may also be entitled to compensation. Even if you have yet to suffer health complications, you may be eligible for lifetime medical monitoring. To learn more and to see our short video, visit our PFAS contamination and injury page. Do you have a positive test for PFAS in your blood or have PFAS in your drinking water? Contact a PFAS contamination lawyer at Mahany Law online , by email  or by phone at 202-800-9791.