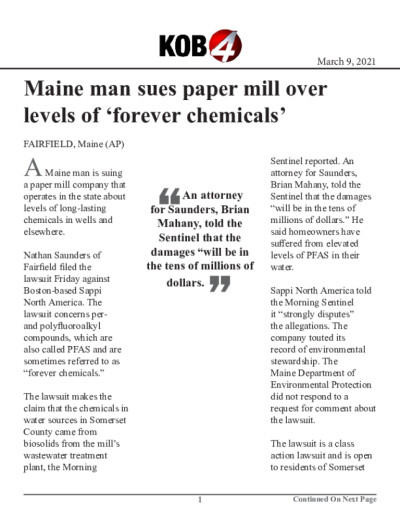 A Maine man is suing a paper mill company that operates in the state about levels of long-lasting chemicals in wells and elsewhere.

Nathan Saunders of Fairfield filed the lawsuit Friday against Boston-based Sappi North America. The lawsuit concerns per- and polyfluoroalkyl compounds, which are also called PFAS and are sometimes referred to as “forever chemicals.”

The lawsuit makes the claim that the chemicals in water sources in Somerset County came from biosolids from the mill’s wastewater treatment plant, the Morning Sentinel reported. An attorney for Saunders, Brian Mahany, told the Sentinel that the damages “will be in the tens of millions of dollars.” He said homeowners have suffered from elevated levels of PFAS in their water.

Sappi North America told the Morning Sentinel it “strongly disputes” the allegations. The company touted its record of environmental stewardship.

State officials have found dozens of wells in Fairfield had higher levels of the compounds than the federal limit.