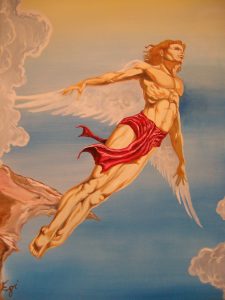 Anyone who knows Greek mythology probably knows the story of Icarus. Hoping to escape the violence in ancient Crete, Icarus’ father created a set of wings for his son. The wings were made of feathers and wax.

Before escaping, Icarus was warned not to fly too high or too low. If he flew to low, his wings would be soaked by the sea causing him to fall into the ocean. Fly too high, and his wings would melt from the heat of the sun. Icarus ignored his father’s instructions not to fly too close to the sun; when the wax in his wings melted, he tumbled out of the sky and fell into the sea where he drowned, sparking the idiom “don’t fly too close to the sun”.

When in high school, we learned from our English teachers that the moral of the story in Icarus is to beware ambition because risks can lead to unexpected consequences. Fast forward to June 2020 and the lawyer behind the first and wildly successful case against Monsanto’s Roundup is now facing years behind bars. His crime? Extortion.

The lawyer who had privilege of trying the first case was 38 year old Timothy Litzenburg. That victory paved the way for several more trial victories against Bayer Monsanto and the current settlement estimated to be in the billions of dollars. Like Icarus, however, Litzenburg’s ambition would be his downfall.

In this post we look at Litzenburg’s rapid downfall and what it means to people with Round Up claims who are still seeking a lawyer.

On December 16, 2019, Tim Litzenburg was charged with transmission of interstate communications with the intent to extort, criminal conspiracy and attempted extortion. We obtained from the court a copy of the affidavit used to charge Litzenburg. It reads like a suspense thriller.

Kevin Towers is a special agent with the U.S. Postal Inspection Service, the law enforcement arm of the Post Service. Prior to his victory in DeWayne Johnson’s case, Litzenburg was employed as a lawyer at the Miller Law Firm in Virginia. Even before the ink was dry on the jury verdict in DeWayne Johnson’s case, Litzenburg was already planning his departure from the Miller firm.

Agent Towers says that in June of 2018, before the trial was even started, Litzenburg was stealing trade secrets and confidential information from his law firm. This information comes from a separate civil lawsuit filed against him by his former law partners.

Not happy with his $289 million win, one year later in 2019, Litzenburg allegedly contacts an unnamed company, presumably Monsanto’s primary chemical supplier and says he is working on more complaints. He said unless he had a meeting with the company, he would file the new lawsuit, this time naming the supplier as a defendant.

He demanded a face to face meeting in Charlottesville Virginia on Halloween to discuss “discrete business.” The discrete business he apparently had in mind was a shameless shakedown.

In October, Litzenburg said he had 800 clients signed up but that he had not yet told any of those clients about the unnamed chemical company. Later he allegedly said he wanted to obtain a $5 million settlement for the client in his unfiled complaint and a $200 million consulting fee for himself and another attorney.

If his demands weren’t already brazen, Agent Towers says that on October 24, 2019, Litzenburg put his demands in writing! According to Towers,

“On or about October 24, 2019, Litzenburg emailed Attorney 1: ‘Please accept this email as a written demand in follow up to our discussion about the same.’ In the email, Litzenburg reiterated his demand for a $5 million settlement for Person, 1 and a separate $200 million “consulting agreement” for himself and his associates.

“Litzenburg described resolving Person l’s case as ‘only a first step.’ Litzenburg then said if Person 1’s case is resolved, ‘We would simply advertise and sign up more users of Roundup home products that contain [Company 1 chemicals]. In fact, that is precisely our plan, absent some agreement to the contrary.’

“Litzenburg continued, ‘The [Company 1] non-Hodgkin lymphoma litigation that we are planning will be ‘Roundup Two,’ and I’m excited to lead the charge again. This time, to my great financial benefit.’ Litzenburg stated that if he filed suit against Company 1, ‘[t]here would quickly be a docket of thousands of cases against [Company 1].’

“If litigation commenced, Litzenburg warned, ‘[t]his become [sic] an ongoing and exponentially growing problem for [Company 1], particularly when the media inevitably takes notice. The defense costs and cost to ultimately resolve the thousands or tens of thousands of cases would be well into the billions, setting aside the associated drop in stock price and reputation damage.’”

By entering into the consulting agreement with Litzenburg, the unnamed chemical company could weather the storm and avoid the “parade of horribles.” In exchange, Litzenburg wouldn’t sue.

Instead of paying Litzenburg $200 million for consulting services, the company contacted authorities.

With prosecutors now involved, the company began pressing Litzenburg for details. They wanted assurances that by paying the money, they wouldn’t get sued by hundreds of other victims.  Litzenburg suggested he would “take a dive” and torpedo his own client’s cases.

The rest is history. Litzenburg was arrested and charged. On June 19, 2020 he and Daniel Kincheloe each pled guilty to a single count of transmitting interstate communications with the intent to extort.

In announcing the guilty pleas, a Justice department spokesperson said, “This is a case where two attorneys blew well past the line of aggressive advocacy and crossed deep into the territory of illegal extortion, in a brazen attempt to enrich themselves by extracting millions of dollars from a multinational company. Today’s pleas underscore that when crimes are committed, members of the bar, like all members of the public, will be held accountable for their actions.”

At the time of his arrest last year, Litzenburg reportedly told the Wall Street Journal, “I sleep well at night knowing I am helping injured people as best as is currently possible.” When sentenced later this year, Litzenburg is likely going to be sleeping on a hard mattress in a prison cell.

Lesson’s Learned – How to Select the Right Roundup Lawyer

When you need a lawyer choosing the right lawyer is one of the most important choices you will make. The Roundup litigation is considered a mass tort case. They are called this because the cases typically involve numerous victims or plaintiffs against one or a few defendants in state or federal court.

At last count there were tens of thousands of cancer lawsuits already filed against Bayer Monsanto. It isn’t unusual for some lawyers to have thousands of clients. If you wonder how they get those clients, just look at all those late night TV ads. Sue Johnson & Johnson for asbestos in baby powder, cancer from Roundup, etc.

We are not opposed to mass torts. They actually make sense.  Each case can cost hundreds of thousands of dollars to prosecute. And it would be impossible to depose the same key witness at Bayer Monsanto 122,000 times. (Not unless that witness lives well beyond her 600th birthday and you don’t mind delaying your case that long.)

The key is finding out and researching who is taking your case. Many lawyers collaborate and pool resources on these cases. Again, that is fine but stay on top of who is doing the work and who you are dealing with.

We don’t use lead generators and nor should the law firm you hire. Clients should always be treated as a client and never as a commodity. The first step in being treated properly is knowing who you hired.

Status of Roundup Litigation – Is It Too Late to Sue?

It may or may not be too late to sue roundup depending on where you live. The time to sue for injuries is regulated by the states. Each state has their own rules called “statute of limitations.” Luckily, these statutes can usually be extended in injury cases until you “knew or should have known you had a claim.” That is important because if you used Roundup as a greenskeeper between 2008 and 2011 and later developed cancer, the clock doesn’t start back in 2008. In fact, it might not even start until 2018 or some later date when a jury finds that you should have known about the cancer.

If you don’t develop cancer until 2020, you are probably still okay. Remember, however, that each state has its own rules and some states like Kentucky and Louisiana have very strict rules.

[We cover many of these topics on our website. Anyone seeking more information should visit our two cornerstone posts, Roundup Cancer Claims and Cancer Patient Resource pages. The latter is a guide to the many specific roundup stories and topics covered on our site. Our resources page is also where you will find our videos and state specific pages.]

We can’t tell you whether you are still in time to file a claim without speaking with you to gather more details. We can share, however, that Bayer Monsanto agreed to a blanket settlement of $10 billion. Very little of that money is allocated to future claims. Ideally you probably should have already brought your claim.

The longer you wait, the worse your odds.

Think you have a case? Our cases are included in the global settlement. We are only considering cases involving Non-Hodgkin’s lymphoma. While we believe glyphosate, the active ingredient in Roundup and RangerPro weed killers, is responsible for many cancers, there isn’t much medical evidence to support those claims.