Nonprofit agrees to pay $1.9M fine after whistleblower suit over products it claimed were made by visually impaired Americans 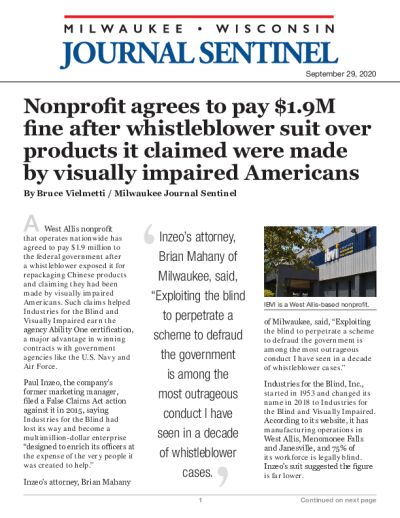 A West Allis nonprofit that operates nationwide has agreed to pay $1.9 million to the federal government after a whistleblower exposed it for repackaging Chinese products and claiming they had been made by visually impaired Americans.

Such claims helped Industries for the Blind and Visually Impaired earn the agency Ability One certification, a major advantage in winning contracts with government agencies like the U.S. Navy and Air Force.

Paul Inzeo, the company’s former marketing manager, filed a False Claims Act action against it in 2015, saying Industries for the Blind had lost its way and become a multimillion-dollar enterprise “designed to enrich its officers at the expense of the very people it was created to help.”

Inzeo’s attorney, Brian Mahany of Milwaukee, said, “Exploiting the blind to perpetrate a scheme to defraud the government is among the most outrageous conduct I have seen in a decade of whistleblower cases.”

Industries for the Blind, Inc., started in 1953 and changed its name in 2018 to Industries for the Blind and Visually Impaired. According to its website, it has manufacturing operations in West Allis, Menomonee Falls and Janesville, and 75% of its workforce is legally blind. Inzeo’s suit suggested the figure is far lower.

In a statement Tuesday, president and CEO C.J. Lange said IBVI worked with the Justice Department and found that none of the initial claims raised by Inzeo were valid, but that it discovered two employees who were “engaged in inappropriate activity” and were fired.

“These settlement negotiations have provided an opportunity for us to strengthen our relationship and trust with the United States government, while also ensuring that our staff is working towards our mission of blind employment.”

Inzeo, of Waukesha, said that while he was at Industries for the Blind, it imported about $40 million worth of goods from China, Taiwan and South Korea annually, which it resold as products made in the U.S.

“When I asked the warehouse manager why, he replied it was easier to hire sighted workers because it took too long to teach the blind how to do the work.”

Inzeo worked for the company from 2007 to 2013, when he said he was laid off. But he’d long before begun gathering information, records, photos and videos of operations at the nonprofit.

The Civil War-era False Claims Act allows people with inside information about fraud against the federal government to bring the actions under seal while the Justice Department investigates, and allocates such whistleblowers a portion of any recoveries.

I’m thrilled that the government stopped and fined these people,” Inzeo said of the DOJ action.

According to federal court records, the U.S. government only intervened in the action against IBVI, not against the five officers of the company Inzeo had also named in his original court case.

The federal Ability One Commission had certified IBVI as providing blind-made products, which gave the company special access to government procurement contracts.

Inzeo said Industries for the Blind sold office and cleaning products, promotional items, furniture and clothing and other goods for prisons. In 2009, he said, it won a $30 million contract from U.S. Census Bureau to supply shoulder bags for census workers. The bags came from China, he said, and people in West Allis merely clipped on the shoulder straps.

He said he saw other products, like mops, come from China, be removed from their packaging and put in new packaging to be sold as something made by blind workers.

“You can’t claim assembly just because you put it in a box,” he said.

Inzeo said he has an autistic son, and it bothered him to see how people with a disability were being used.

“I walked into the job thinking, ‘I’m gong to do wonderful things for people that really need it,'” he said. “But it was all exploitation.”