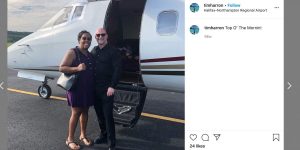 A recently married Las Vegas couple have been arrested for Medicaid fraud. Prosecutors call their case “one of the most brazen and egregious cases” ever.

According to prosecutors, this case begins in 2006. That year Latisha Harron created a company called Agape Healthcare Systems. In 2010, her company became an authorized North Carolina Medicaid provider. Her application said Agape provided home healthcare services. (Readers of this blog know that many home health services are rife with fraudulent billings.)

To become a Medicaid provider, the owner of the company must not have been convicted of a felony. Latisha certified on her application that she had a clean record but prosecutors say she is a convicted felon previously convicted of identity theft. To further hide her tracks, they say she also used a social security number belonging to someone else.

In 2017, Latisha met the man of her dreams on the Internet, Timothy Harron. Timothy was also a convicted felon. A year later they settled in Vegas and thereafter got married.

During this entire time, Latisha continued to operate Agape in North Carolina. After the couple wed, they started a new company called Latisha Assured Healthcare Systems. Despite having just formed the company, Timothy claimed he was the President of Assured, “proudly representing the community for over 18 years coast to coast, in both behavioral and home health services.”

The couple then registered that company as a Medicaid provider in North Carolina, this time they both lied about their criminal records. Unlike his wife who had a simple identity theft conviction, Timothy had been convicted of wire fraud, conspiracy to commit wire fraud and conspiracy to commit money laundering.

Not satisfied with simply defrauding North Carolina taxpayers, they also registered to be a Medicaid provider in Nevada. That was in February 2020.

Similar to North Carolina’s Medicaid provider application, Nevada’s form included the question, “Have you … or any owner, managing employee, or person with controlling interest ever been

According to the indictment,

“[Timothy and Latisha Harron] publicly projected that Assured was a successful, national healthcare company. They flaunted a corporate jet purchased in the name of Assured, and represented that Assured had locations in Connecticut, Maryland, Virginia, and multiple locations in North Carolina and Nevada. [The Harrons] traveled extensively to exotic locations, routinely broadcasting their expensive meals, wine, and other purchases, over social media. In reality, Assured had no true patient revenue. Instead, Assured was funded entirely by millions of dollars in fraudulent billings from Agape to North Carolina Medicaid for fictious [in-home personal care and respite] services. Likewise, [their] extensive travels and expenses were funded by the same fraud.”

Their scheme was rather ingenious but ultimately, they were caught.

Prosecutors say the couple would search obituaries for names of people who died in nursing homes. They would then query North Carolina’s Medicaid system to see if the person was a Medicaid recipient. If they were, they would back bill for up to a year’s worth of fictitious services that were never performed.

In 2019 they were the subject of a random audit. Being brazen, the couple allegedly created fictious care plans and service plans, monitoring notes, health care applications for employment, competency checklists, nurse aid verifications, and activity logs.

Their new company did the same thing however the Harrons were caught before those bills were paid by Medicaid.

Latisha has been arrested and arraigned. As of March 23rd, she is being held without bond. On May 21st, Timothy turned himself in and was released by a Magistrate Judge. The release was stayed for 48 hours so that the Justice Department could file an appeal. The government has appealed Timothy’s release order and says that he is a flight risk.

Not only do the Harrons own a private jet (allegedly purchased with the stolen Medicaid funds), prosecutors say that last time Timothy was arrested it was while trying to cross the border into Mexico. They also say he has ties to organized crime in Europe.

If convicted, the happy couple could spend the rest of their life behind bars. (We remind readers that Timothy Harron and Latisha Harron have not yet been convicted of a crime. They are presumed innocent until proven guilty. The allegations from the indictment that appear in this post are just that, allegations.

Announcing the arrests, U.S. Attorney Robert J. Higdon, Jr.  said, “The indictment alleges a $13 million fraud that funded a gluttonous, social media-marketed lifestyle – one filled with private jets, penthouses and luxury resorts.  Most reprehensible is the fact that this crime is alleged to have been carried out on the backs of our most vulnerable:  the poor, the deceased, the elderly, and the disabled. Even in the face of a global pandemic, this office will continue its work to ensure that defendants like these will be held to fully account for their actions.”

A spokesperson for the Department of Health and Human Services said, “Stealing taxpayer money from a health care program designed to care for the poor and disabled just to bankroll a private jet and other luxury products – as alleged in this case – is reprehensible.”

The FBI, IRS and North Carolina authorities are also investigating.

No one is saying how the Harrons got caught. Clearly they were living high on the hog and flaunting their wealth. Their social media posts were often signed with the hashtags #jetsetter, #millionaire, #lifeisgood and #billionaire. Unfortunately, it appears their wealth was stolen… their wealth came from the sweat and work of hardworking taxpayers.

Ironically, Timothy’s Instagram has a quote attributable to him that says, “I’m not doing a business that’s new, I’m doing a new way of doing business.” Assuming he is convicted and sentenced to prison, his new hashtag can be #prisonlife. From Louis XIII cognac to prison hooch, this could be a painful life experience for the Harrons.

Fraudsters who flaunt their wealth become targets. Their arrogance is often their undoing.

North Carolina is one of 29 states that also pay rewards for Medicaid fraud information.

The rewards are usually between 15% and 30% of whatever the government collects from the wrongdoers. The money spent by the Harrons on exotic vacations and Louis XIII cognac is gone but federal agents have seized their private jet. The couple’s Aston Martin will probably also be seized.

To learn more about Medicaid whistleblower rewards and how you can stop homecare fraud in its tracks, visit our homecare and hospice care whistleblower page. Ready to see if you have a case? Contact us online by email or phone at 202-800-9791.

All inquiries are protected by the attorney – client privilege and kept strictly confidential. We accept cases anywhere in the United States. There are no fees or costs unless we are successful collecting a reward for you.