Do I have to pay tax on my whistleblower reward? 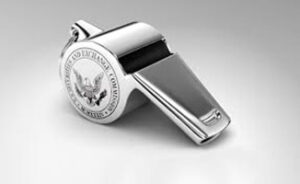 Are Whistleblower Rewards? Keep Reading to Find the Answer

That is a question we almost always hear after one of our clients is successful in a whistleblower action. And because we are fraud lawyers –  not tax lawyers – we always help our clients find a good tax lawyer in case they don’t already have a CPA.

The IRS says rewards are taxable but a few courts take a different opinion (and that is why we always help our clients find someone qualified to answer.) The answer should be the same anywhere in the United States but it’s not.

We could stop right here but that doesn’t really help answer your question.  Our general advice is to follow the direction of the IRS, include whatever reward payment as income on your return and then if you and your accountant believe it shouldn’t be taxable, seek a refund.

Why should I pay if I don’t owe?

The answer is simple. The IRS says qui tam rewards are taxable. If you don’t pay tax and later lose, the IRS will tack on a whole bunch of interest and penalties. Enough to ruin anyone’s day. Our thought is pay it while you have it, stop the clock on interest and penalties and seek a refund. Either way, assuming the IRS doesn’t agree with you, the matter is headed to court. At least if you already paid there won’t be an unhappy surprise several years down the road.

Let’s look at a recent case from the Northern District of Texas. A case where the court sided with the IRS.

Sharon Barnes filed a whistleblower lawsuit (qui tam) under the False Claims Act (FCA) in 2012. She claimed that a business unit of UFC Aerospace misrepresented itself as a woman’s owned business in order to obtain lucrative defense contracts.

The government intervened in her case in 2015 and settled with the company and its president for a combined total of $20,015,956.92. Under the False Claims Act, whistleblowers can receive between 15% and 30% of whatever the government collects based on the whistleblower’s information.

In Sharon’s case, the United States awarded her 18% or $3.6 million. Knowing that the IRS considers whistleblower rewards to be taxable income, Sharon listed the $3.6 million reward on her 2015 income tax return. She then paid $914,000 and sought a refund. The IRS denied her refund claim and the matter went to court. (She did get a $67,000 refund from the self-employment taxes she paid on that amount.)

Barnes’ lawyer trotted out the tried and true arguments plus a few new ones. Her most novel claim was that under the “origin of the claim doctrine”,  the taxability of her rests on the origin and nature of the claim to which the recovery relates. Because she received a percentage of the government’s reward and the government doesn’t pay taxes, nor should she.

Although the Fifth Circuit of Appeals (governing courts in Louisiana, Texas and Mississippi) never ruled on the issue, at least four other federal appeals courts had determined qui tam rewards are taxable.

Not every court agrees with the IRS and the above decision.

On December 18, 2020, the Pennsylvania Supreme Court took the opposite view. Unfortunately, because it is a state court ruling, only Pennsylvania state income taxes are affected. If you live in the Keystone State, the IRS says you still must still pay federal taxes on the money you received.

After legal fees, O’Donnell walked away with a net reward of $34,560,000.00. The IRS was paid its due but Allegheny County, the Borough of Fox Chapel and the Fox Chapel School District wanted their share. When the parties couldn’t agree, the case headed to court* and ultimately the Pennsylvania Supreme Court.

In a well-reasoned opinion, the court dissected the many components of income. O’Donnell’s qui tam reward didn’t fit any of them. A unanimous Pennsylvania Supreme Court refused to impose any tax liability on O’Donnell’s whistleblower reward. In the words of the court, “It seems incongruous that, on the one hand, we would encourage individuals to ferret out government waste, and, on the other hand, we would punish them by taxing the proceeds for doing so.”

So, are qui tam rewards taxable? The government will almost always say yes. Unfortunately, many courts agree. That is why we say let’s get you your reward first. Then we can help you find the right answers based on where you live.

*Like Sharon Barnes, O’Donnell reported the income and then filed an amended return to get back the money.

Thus far our discussion has centered on whether qui tam rewards are taxable. Often whistleblowers suffer from retaliation and have a separate retaliation claim. Once again, it pays to have a good CPA or tax lawyer when settling retaliation claims. (If you hire us to be your whistleblower lawyer, we will help find the right tax advisers.)

To the extent a settlement is made for lost wages, that settlement would likely be taxable. Afterall, if the reward is a substitute for wages and wages are taxable income, so is the retaliation settlement.

If the retaliation claim is structured as pain and suffering or emotional distress, it may not be taxable. Once again, although fairly consistent, courts are not in universal agreement.

The bottom line? Our mission and job is to get you the maximum reward possible. Just like you wouldn’t let your eye doctor also replace your hip, we try to steer clear of taxes. That doesn’t mean we will leave you in a lurch. If you don’t have a tax professional with qui tam experience (VERY few do), we know where to look.