[Updated June 2019] Medicare fraud is a victimless crime, right? Unfortunately, some folks still see things that way. That attitude may account for why Medicare fraud costs taxpayers tens of billions of dollars each year.
Who says? The FBI!

Obviously Medicare fraud isn’t a victimless crime since those Medicare dollars come from taxpayers. We work hard so some fraudster can get our hard earned funds.

Taxpayers aren’t the only ones suffering. When the fraud involves medically unnecessary treatments or drugs, individual patients can physically suffer. Today, the CEO of a radiology company is facing life in prison after two patients died because of improperly read X-rays.

Everyone makes mistakes including doctors. Ordinarily, a physician who misreads an x-ray is guilty of medical malpractice. When the owner of a radiology company directs non-doctors to read and interpret x-rays, ultrasounds and cardiology tests, the behavior becomes a crime.

According to his indictment, Chikvashvili owned a mobile X-ray, EKG and ultrasound business called Alpha Diagnostics. As crazy as that sounds, you don’t have to be a physician to own a mobile radiology business but you do have to have licensed technicians administer tests and licensed physicians interpret the results.

The feds say that for years, Chikvashvili got away with providing radiology services in which no doctor interpreted the test results. Only when a treating doctor questioned the results would he pay a real doctor to read the results.

Last month a federal jury in Baltimore found Rafael Chikvashvili PhD guilty of criminal healthcare fraud. Because patients died as a result, he could spend the rest of his life in prison.

Jurors heard testimony that Chikvashvili asked a radiology tech to read X-rays, something he was not qualified to do. (Chikvashvili wasn’t qualified either, he is a mathematician by profession and never licensed as a physician, much less a radiologist.) On one occasion, even his tech wasn’t available. Despite being on vacation in Jamaica, Chikvashvili told him to read the x-rays from a laptop and make up false reports. The tech did. Two patients died.

The technician, Timothy Emeigh, did not go to trial and instead pleaded guilty last year.

In announcing the convictions, United States Attorney Rod Rosenstein said, “The evidence showed that Rafael Chikvashvili failed to provide medical services to patients who needed them, and billed for services that he did not provide. The jury found that two patients died because their X-rays were not reviewed by a qualified radiologist. Health care fraud has consequences, in money wasted and lives lost.”

Profits over patients. That happens every time a hospital, doctor, or clinic commits Medicare fraud.

Prosecutors say the scheme went on for at least 16 years. Could it have been prevented or stopped? Yes. And it appears that the prosecution of Chikvashvili may have been prompted by a whistleblower complaint a few years ago.

Since his conviction last month, the court ordered Chikvashvili taken into immediate custody. Incredibly, his lawyers have asked that he be released pending sentencing because he poses “no danger to the community!” Because he is facing two life sentences, the government has asked that he remain behind bars. They also note that he may have both Georgian and Russian citizenship and transferred hundreds of thousands of dollars offshore after the FBI began its investigation.

[Update] In June, 2016 Chikvashvili was sentenced to 120 months in prison. 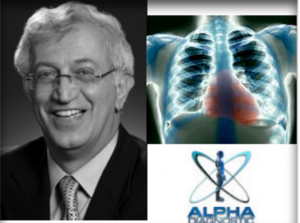 Unrepentant as always, he appealed his conviction. He claimed the sentencing enhancement attributable to the death of two patients was inappropriate since false billing can never cause a patient to die.

At trial jurors heard that one of Alpha’s unqualified technicians misdiagnosed congestive heart failure in two patients. Those test results should have been read by a radiologist instead.

The jurors concluded that but for the misdiagnosis, both patients would have likely survived.

On appeal, a three judge panel upheld the convictions. They said, “We hold that the execution of a fraudulent scheme—not merely the submission of a false claim—may give rise to liability… when execution of the scheme results in death.”

The court further noted that the victims of healthcare fraud are not just taxpayers and insurance companies,

Insurers are not the only victims of fraudulent billing schemes, and medical fraud can do more than drain our healthcare system of badly needed funds. As Chikvashvili’s story illustrates, deceit and falsehood in the delivery of healthcare can pose a real danger to the patient victims of fraud, whose very lives may be put at risk by the perpetrator’s avarice. To guard against these hazards, Congress criminalized healthcare fraud and
authorized steep penalties where the fraud results in death.

When the appeal failed, Chikvashvili tried again, this time attacking his lawyer. In 2018 he claimed he received ineffective assistance of counsel. In April of 2019, that motion was denied.

And as of this writing, Chikvashvili has appealed again. We feel for the victims of the two deceased patients who must constantly hear Chikvashvili’s latest denial of any responsibility. He remains in prison during these appeals. No judge has yet seen fit to release him.

To qualify for an award, you must have an attorney and inside information about healthcare fraud. Your attorney will help you file a lawsuit – called a Qui Tam complaint – in federal court. If the lawyers or federal prosecutors are successful in recovering money from the wrongdoer you may earn an award of up to 30$ of what the government collects.

In the case of Chikvashvili, prosecutors say he bilked Medicare of $7.5 million. Add triple damages and special penalties and the total recovery could be in the tens of millions. Not a bad payday for saving lives and stopping Medicare fraud.

Not everyone gets an award, of course, but many do. Our whistleblower clients have already received over $100 million in awards.

Had a whistleblower come forward earlier, two patients may have still been alive today.

If you have information, don’t delay. The law has a “first to file” requirement. That means if you snooze, you may lose. And sometimes, patients may die.

Need more information? Download or free 11 Step Guide to Whistleblowing or contact us. The author of this post, attorney Brian Mahany, can be reached at or by telephone at (414) 704-6731 (direct).

We pulled the court records to see just how much Chikvashvili made on the two patients who lost their lives. For $8.87, one patient lost their life. The other lost her life for $218.36. We think he should be serving life.