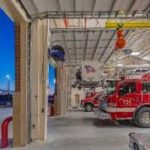 50,000 people displaced. Thanksgiving ruined. Homes and businesses damaged. Lives disrupted. Many in fear of the next blast. And who knows what the environmental impacts are. This is the aftermath of the two huge explosions and raging fires at the TPC Group chemical plant in Port Neches, Texas

In the first few days after a major chemical plant explosion, most people are just trying to put their lives back together again… cleaning up debris, making arrangements for contractors to repair damages.

In our experience, not all the damage is easily identified and even when it is, getting an insurance company to pay can be difficult. For example, we know that many buildings suffered broken windows. Even on windows that didn’t break, however, the seals may have been irreparably damaged allowing water intrusion and mold. Something very familiar to those living along the Gulf Coast.

In this post we explore hidden structural damages, environmental effects, blast injuries and a quick check list for nearby residents. The information provided is applicable to most all chemical plant blasts.

The TPC factory in Port Neches has been around since 1944. It manufacturers a variety of products including butadiene and methyl tera-butyl ether (MTBE). MTBE is an additive to gasoline. It replaced tetraethyllead as octane booster in gasoline. Because it is so toxic and dangerous, its use has been banned in many states. Although its use has diminished in the US, it is exported to other countries.

How much MTBE may have been spilled or released into groundwater remains to be seen. The investigation into the blast and the environmental impacts are likely to take months.

Butadiene is another major product at the TPC Port Neches plant. It is a gas used in the production of synthetic rubber. The EPA classifies it as a known human carcinogen.

The TPC Group plant already has air monitoring equipment in place. Initial reports are that the release of this toxic gas is not a major threat at the moment. The real long-term risk remains the MTBE. Once in the groundwater, it spreads quickly and may be impossible to clean up.

We also know that asbestos was used in the plant. The explosion has spread asbestos contaminated debris throughout the neighborhood and also endangers anyone downwind of the smoke plume. As I update this post on Saturday, the evacuation order has been lifted but fires continue to burn.

The first blast rocked the quiet town of Port Neches around 1:00 Wednesday, November 27th. The powerful blast shattered windows and pushed in doors up to 1 mile away (although the damage from the blast zone is probably much larger).

13 hours later a second blast ripped through the TPC Group plant. The 2:00 pm blast was so powerful that it lifted a massive steel reactor tower high into the sky. We believe it also caused significant but hidden structural damages to nearby homes, businesses and schools.

The Houston Chronicle has posted many pictures of the damage caused by the blast. What you see are broken windows and doors. Shattered glass is always the most obvious sign of a major explosion. Reports say that the blast was so severe that some residents claim both the front and rear doors of their homes were destroyed. A blast of that magnitude is powerful enough to cause long term structural damage, damage that is often not seen or ignored by insurance adjusters.

Were buildings in Port Neches structurally damaged? We certainly think so, although only onsite inspections by experts will be able to show those damages. Most insurance adjusters work for either the insurance company or the chemical plant. Their primary focus is to minimize dame claims. They certainly aren’t looking for hidden damages like broken weather and window seals.

Insurance Bad Faith and Structural Damage Analysis – How We Can Help

As with any major disaster, many lawyers will come out to help. Hopefully the TPC Group will immediately address the small claims, hotel reimbursements and the like. In our experience, plant operators often do, although the speed in handling claims often leaves something to be desired.

Our interest lies in long term environmental impacts and major structural damages. Chances are that if you have hidden damages, TPC Group won’t easily write a check. Nor will your own insurance, assuming you have insurance. Lost profits and business interruption are other areas where business owners can expect a fight.

With hidden damage, time isn’t on your side. It could take months before you realize windows on commercial buildings have broken seals or learn of mold from water intrusion or discover foundation cracks. By then, insurance adjusters from either TPC Group or your own carrier won’t want to pay. Ditto if you already accepted a check in “full payment” of your damages.

If you have a commercial property or public building that has suffered a loss as a result of the Port Neches or any other plant or refinery explosion, let us know. Don’t let a claims adjuster, TPC or an insurance company hide behind exclusions in the policy or claim the damage was existing.

We can help with:

Through our partners, we can provide blast analysis, industrial claim analysis, evaluation and business interruption analysis.

To learn more, contact attorney Brian Mahany online, by email or by phone at 202-800-9791. We also invite you to visit our insurance bad faith information page.

*We regret that we do not handle structural damage claims to single family residents. But we do urge homeowners to check with a lawyer before signing any release or depositing a check from TPC Group or an insurance carrier.

Fortunately, firefighters were able to get the fires at the TPC Group plant under control. Our hats are off to the first responders in Port Neches and surrounding communities who sacrificed their Thanksgiving and risked their lives to fight the fire.

Thankfully no lives were lost, although several plant workers were hurt. It is a miracle that no one died.

We know (believe) that there was no major release of toxic gasses too. That means the firefighters should be okay in the weeks and months ahead. We know from our Roundup weed killer cases, however, that health effects can take years to surface.

Of more immediate concern are what other toxins were releases into the ground and the effect that they will have on the environment and long-term property values. The same is also true for asbestos exposure which can cause lung cancer, asbestosis and mesothelioma. Microscopic asbestos fibers are easily inhaled into the lung and just a few fibers can have fatal consequences. [Firefighters and plant workers are at high risk.]

Years of studies by the military also indicate that the shock waves of large explosions can sometimes cause injuries. Ear injuries (hearing loss and tinnitus) are the most common injuries but depending on the proximity to the blast, damages can occur to the lungs and hollow organs of the gastrointestinal tract. A Johns Hopkins University study found a link between explosions and traumatic brain injuries.

Primary blast injuries are characterized by the absence of external injuries; thus internal injuries are frequently unrecognized and their severity underestimated.  Most people were inside at the time of the 1:00 am blast but had gathered to watch the fire and were therefore outside for the 2nd blast at 2:00 pm.

TPC Group has not exactly been a model corporate citizen. While it provides a couple hundred jobs to area residents, those jobs have come with a high cost. (The company’s website says, “Our employees are committed to safely making these products in a manner that is protective of our environment and respectful of the communities where we have operations.” We strongly disagree.)

Since 2012, the Port Neches plant has been owned by two private equity firms. We worry that private equity firms don’t always invest for the long haul. Many have a reputation of trying to squeeze as much profits as possible with as little or no longterm investment.

The Houston Chronicle says the plant has been steadily depreciating in value for years. They say the facility has been fined over $100,000 since 2014. This year it was fined after failing to report pollution incidents. US Environmental Protection Agency records show that has been out of compliance with the federal Clean Air Act 12 of the last 12 quarters.

Those figures are troubling. We worry about groundwater contamination, long term health effects and diminished property values. We would love to hear from current or former employees with inside information about major pollution and environmental violations. (All “whistleblower” inquiries are held in strict confidence.)

We also wish to hear from residents with long term health effects related to exposure to chemicals released by TPC Group plants in Port Neches or Port Houston.

The TPC Group has set up a hotline for area residents and business owners. While we applaud those efforts, don’t sign away your rights without consulting with a lawyer. We anticipate dozens of folks are calling to have hotel bills paid, recover for the lost Thanksgiving dinner, broken windows and the like. Hopefully the company won’t hassle anyone and simply do the right thing and quickly pay.

In our experience, companies and their insurance companies are only to happy to pay these smaller claims in the hopes of avoiding much larger future liabilities. Will you later develop mesothelioma from exposure to asbestos from the blast? Will a family member later develop cancer from MTBE contamination? Do your ears develop tinnitus? Did you accept a check for broken windows only to discover hundreds of thousands of dollars of mold remediation is later needed because seals were broken by the blast?

Find a local lawyer and consult with him or her before signing any release or endorsing a check from TPC Group or their insurance carrier (or your carrier too). Can’t find a local lawyer? Try the Jefferson County Bar Association in Beaumont.

If you have a business and suspect there may be structural damage, give us a call. We can evaluate if there is a much larger claim to be made. And obviously, call us if you were injured or later develop health effects from exposure to chemicals from the plant. Our contact information is above.

Finally, there will invariably be class actions lawsuits filed on behalf of local residents. In our experience, they usually are. Should you opt out? Participate? Ignore the notice?

We never advise ignoring notices. If you are a business owner and think you may have major structural damage or are not sure, give us a call. Working with our local Texas partners and experts, we can evaluate if you are a good candidate to opt out. Much depends on what the class action is trying to accomplish. Ditto if you were hurt or worried about long term health effects.

Five men are behind bars after being convicted of blatant fraud against taxpayers and the United States. According to court … END_OF_DOCUMENT_TOKEN_TO_BE_REPLACED