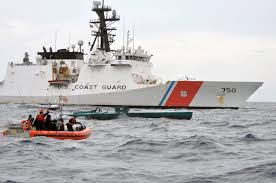 The US Coast Guard Enforces MARPOL, the International Treaty Preventing Ships from Discharging Waste into the Sea. Learn How Seamen Can Earn Huge Cash Rewards by Becoming Oild Pollution Whistleblowers

On October 1st, a criminal special agent from the Coast Guard Investigative Service (CGIS) filed criminal charges against FGL Moon Marshall Limited, Unix Line Pte, Ltd., and Gilbert Fajardo Dela Cruz. The defendants are charged with Aiding and Abetting, Obstruction of Justice and an Act to Prevent Pollution from Ships. The case was started by a whistleblower. Under federal law, the whistleblower is entitled to up to 50% of whatever prosecutors recover from the wrongdoer.

According to the complaint, FGL Moon Marshall Limited and Unix Line Pte, Ltd are respectively the owners and operators of the M/T Zao Galaxy, a 16,408 ton tanker flagged in the Marshall Islands. On January 21, 2019, the Zao Galaxy set sail from the Philippines. Exactly three weeks later the ship arrived at a terminal in Richmond, California. The vessel was carrying a cargo of palm oil.

The whistleblower says while entering the port, the vessel dumped oily waste into the bay.

When the vessel pulled into port in California, Coast Guard examiners boarded the vessel to conduct an inspection. During the COC examination, a whistleblowing crew member (“Crew Member One”) discretely passed a note to a PSC examiner. The note requested that the PSC examiner find Crew Member One after the inspection so that Crew Member One could ‘tell something’ about a ‘magic pipe’ and ‘damage marine environment.’” A magic pipe is seaman’s slang for a device used to bypass waste storage systems and discharge waste directly into the sea.

Typical of most tankers, the vessel has a small crew. One of the crew members was Gilbert Fajardo Dela Cruz who served as the First Engineer Further investigation revealed that the First Engineer allegedly directed the illegal dumping operations.

Treating oily waste is expensive. The Coast Guard believes the M/T Zao Galaxy cut corners to save money. It was simply cheaper to dump the waste overboard.

Dela Cruz was ultimately charged with a charge of obstruction of justice. The Coast Guard says that relates to allegations that Dela Cruz told crewmembers to lie about the illegal dumping.

Unix, the operator of the vessel, was previously charged with illegal dumping in 2003.

An Act to Prevent Pollution by Ships and MARPOL

MARPOL – short for International Convention for the Prevention of Pollution from Ships – is an international treaty enacted in 1973. One of the countries ratifying the treaty is the United States. The treaty has six sections called “annexes.” The United States has enacted five of the six annexes. All are related to the stowing, handling, shipping, and transferring pollutant cargoes, as well as standards for discharge of ship-generated operational wastes.

Under the Act to Prevent Oil Prevention from Ships, a crew member that has inside information about illegal oily waste discharges can receive up to 50% of whatever the government collects from the ship’s owner and operator. The anti-oil pollution group Marine Defenders claims that whistleblower tips are behind over half the successful oil dumping charges against big ships. Unfortunately, most pollution incidents are never reported.

2005 updates to the law now include certain air pollution incidents. Under the new Annex VI, MARPOL today regulates air pollution being emitted by ships, including the emission of ozone-depleting substances, Nitrogen Oxides (NOx), Sulphur Oxides (SOx), and Volatile Organic Compounds (VOCs). There are also requirements for on vessel incinerators, fuel quality and for offshore drilling rigs.

A study by Marine Defenders revealed that for the last two calendar years, the average whistleblower reward was $409,000. Clearly the Coast Guard and courts take ocean dumping whistleblower cases seriously.

In 2017 a British engineer who reported the illegal dumping of oily waste from a cruise ship was awarded a $1 million whistleblower reward. In that case, Princess Cruise Lines was fined $40 million.

In announcing the reward, a Coast Guard Rear Admiral said, “Without the courageous act of a junior crew member to alert authorities to these criminal behaviors of deliberately dumping oil at sea, the global environmental damage caused by the Princess fleet could have been much worse. The selflessness of this individual exposed five different ships that embraced a culture of shortcuts, and I am pleased at this outcome.”

Interested in collecting your own whistleblower? The first step is calling the Coast Guard, if they don’t prosecute, there is no reward. Remember, the cash rewards are paid from the fines and monies collected from the wrongdoers.

The second part of getting an award is filing a claim under the Act. That is where we step in. Our goal is to stop the pollution and make sure you get the maximum reward possible.

If you are working on a ship and can’t report the oil dumping right away, take photos of the oily discharge, the method of discharge and the logbooks. (Ship officers and crews often fudge logbooks to hide the dumping. We have seen many successful MARPOL prosecutions where the Coast Guard couldn’t prove the dumping but could prove doctored logbooks.)

Ready to learn more? Visit our MARPOL whistleblower information page. Ready to see if you have a case? Give us a call. All inquiries are protected by the attorney – client privilege and kept completely confidential.