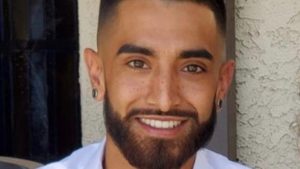 We prosecute insurance fraud cases where the insurance company has defraud its policy holder. (We never represent big insurance companies.) Many times, however, a policy holder defrauds the insurance carrier. Usually these are low level scams… a motorist who claims he was in an accident when really the damage he wants fixed is old or the man who says he can no longer walk because of a workplace injury but a videos on social media of the man playing football with his kids.

This post is unique. It’s a story that needs to be told. In the next few paragraphs we will tell the story of Ali F. Elmezayen, a man prosecutors say killed his girlfriend and his two young autistic kids.  He faces 212 years in prison. (Now that he has been convicted, we hope he is sentenced to every last minute of it.)=

Our story begins in July 2012. Over an eight month period, Elmezayen purchased more than $7 million of life and accidental death insurance on behalf of his family. This from a man who claims he earns $30,000 per year. He purchased so much insurance that the premiums alone cost $6,000 per year.

According to prosecutors, “Dissatisfied with his financial and family situation, Mr. Elmezayen fraudulently purchased millions of dollars in insurance on his common-law wife and disabled young sons, and then drove them off a pier in order to cash in. These two boys deserved a loving father; instead they got a man who put his greed and self-interest above their lives.”

Elmezayen isn’t the brightest criminal. During the trial prosecutors showed that after purchasing the many policies, he repeatedly called the insurance companies to make sure the policies were active and to verify that he would get paid if his partner died in an accident. He also called one of the insurance companies to verify that they did not investigate claims that occurred more than two years after the purchase of the policies.

Apparently insurance companies don’t believe anyone could plan out a murder more than two years in advance. They hadn’t met Ali Elmezayen. What Elmezayen didn’t count on, however, is that the insurance company recorded all calls. The jury wasn’t impressed when they heard the call played back for them.

On April 9, 2015, less than 2 weeks after the 2 year contestability period on the last insurance policy expired, Elmezayen drove off the end of a wharf in the Port of Angeles.  Conveniently his window was open allowing him to safely swim away. His partner couldn’t swim. Miraculously a fisherman saw her drowning and threw her a life jacket.

Their two autistic children weren’t so fortunate. The two boys, 8 and 13, drowned. A third boy was not in the car and escaped injury. The deaths were particularly agonizing, both survived for several hours before succumbing to their injuries.

At trial, his now former girlfriend testified that Elmezayen calmly swam away and made no effort to save her or their children. She also testified that he was abusive and had called her parents and threatened to send her home in a pine box. Little did anyone know just how serious he was.

Elmezayen cashed in the policies and boat and a house in Egypt. He was arrested before he could flee the United States.

Apparently the insurance money wasn’t enough. He later filed a lawsuit against the city and county for not having barriers on the wharf, Honda for making a car with defective brakes and Jiffy Lube for not properly maintaining his car. That suit was later dismissed.

So what was his defense? Apparently even his lawyer was perplexed. Attorney Christy O’Connor said his actions were “eccentric”. She also called him a “kook” with hypochondria and severe anxiety. According to her, he purchased all the insurance because he was worried about the family’s money problems.

Why did he drive off the pier? Once again, his attorney had an answer, his foot slipped off the brake pedal and hit the accelerator instead. And why not try to save his family instead of simply swimming away? There is no explanation for that.

Prosecutors also said he attempted to tamper with a witness and have the witness say that Elmezayen donated the insurance proceeds to charity. Once again, being a “kook” or having your foot slip off the pedal doesn’t explain witness tampering.

A federal jury found him guilty of four counts of mail fraud, four counts of wire fraud, one count of aggravated identity theft, and five counts of money laundering. When sentenced next year he faces 212 years in prison.

He still faces state murder charges for the deaths of his two sons. The state initially decided not to charge Elmezayen with any crime. In fact, police found the brake pedal wasn’t working but couldn’t tell if it was rigged or was damaged after the car landed in the water and was allowed to sit underwater for an extended period of time.

As the evidence of the insurance policies began to emerge, police realized that Elmezayen had lied to them. Any credibility he had was gone.

Elmezayen is not in the United States legally and is therefore being held without bail. Deportation isn’t an issue as he will likely never be released from prison.

The insurance bad faith lawyers at Mahany Law help consumers and businesses who suffer a loss when an insurance companies engages in bad faith such as the bad faith denial of a claim or refusal to defend a lawsuit against the insured. As far as protecting little kids, we leave that to the criminal justice system. No matter what happens to the murder charges, we are confident that Elmezayen won’t see the outside again.

To learn more about our services, visit our insurance bad faith claims page or contact us online, by email or by phone 202-800-9791. All inquiries are protected by the attorney – client privilege and kept confidential.