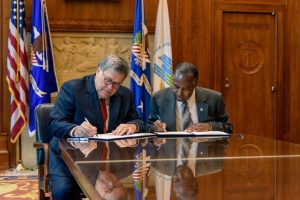 We are huge supporters of the rank and file prosecutors at the Department of Justice and the men and women who work in HUD’s Enforcement Division. That said, we believe that the political powers running these agencies have made a critical mistake by signing the new “Memorandum of Understanding between the Department of Housing and Urban Development and the Department of Justice Inter-Agency Coordination of Civil Actions under the False Claims Act Against Participants in FHA Single Family Mortgage Insurance Programs.” Out of fear of retyping the name of document again and again, let’s just call it the MOI, short for Memorandum of Understanding.

We think its misguided, invites fraud and ultimately hurts both taxpayers and homeowners. We have many friends at both agencies that read this blog… please prove us wrong.

On its face, the MOU is neutral. Read between the lines, however, and we sense that HUD is abdicating its enforcement responsibilities.

According to a Justice Department press release,

“This MOU sets forth a robust and collaborative process for deciding when to pursue False Claims Act cases to remedy material and knowing FHA violations,’ said Attorney General Barr. ‘DOJ and HUD will work together to determine when HUD’s administrative remedies are sufficient, or other recourse is appropriate, to address harm to the borrower, the taxpayer, or the government. Importantly, this MOU is the product of the excellent working relationship that has developed between our two agencies in our shared pursuit of greater clarity and fairness.’

“’his agreement clearly outlines our FHA mortgage program requirements, so they do not impede or discourage lenders from offering affordable FHA-insured loans to credit-worthy borrowers,’ said Secretary Carson. ‘In taking these steps, we are fulfilling an important element our Housing Finance Reform Plan and making clear to all responsible lenders that FHA’s mortgage program is a program they should participate in. At the same time, HUD will not tolerate irresponsible or fraudulent lenders who defraud borrowers and taxpayers. We are thankful for the excellent relationship we have with our colleagues at the Department of Justice who have worked diligently with us on this effort and share our goal of advancing affordable housing finance while protecting the interests of taxpayers.

“As the MOU makes clear, HUD expects that FHA requirements will be enforced primarily through HUD’s administrative proceedings, but the MOU specifically addresses how HUD and DOJ, including the U.S. Attorneys’ Offices, will consult with each other regarding use of the FCA in connection with defects on mortgage loans insured by FHA.”

The False Claims Act is America’s best weapon against fraud. It empowers ordinary Americans to bring a claim on behalf of the United States against a wrongdoer. If the action is successful, the whistleblower filing the claim can keep up to 30% of whatever the government collects. At its core, it lets whistleblowers become private attorneys general and file fraud claims on behalf of taxpayers. The law has helped the government and taxpayers recoup tens of billions of dollars lost to fraud.

Our current Attorney General, William Barr, was no fan of the False Claims Act when he worked for President George H.W. Bush. During his confirmation hearing as Attorney General under President Trump he walked back from that position. We accept him at his word.

HUD Secretary Ben Carson is another story. He has publicly stated his dislike for the Act. That he now says FHA mortgage loan requirements should be “enforced primarily” through HUD’s administrative proceedings is cause for even greater concern.

Instead of using the power anti-fraud provisions in the False Claims Act that provide for triple damages and huge fines, Secretary Carson wants to “educate” lenders. These lenders are billion dollar enterprises and already quite sophisticated. They simply don’t want to pay for the rules.

Secretary Carson does say his agency may levy fines but downplays the seriousness of enforcement type actions. “Could some fines be levied? They could be. But we’re talking about smaller fine amounts. Nothing outrageous.”

There are plenty of safeguards built into the False Claims Act. Unless the whistleblower can prove the wrongdoers’ actions involved fraud or willful / reckless conduct, the enhanced penalties don’t apply. That means a bank or mortgage company that makes an honest mistake has little to fear.

What’s Behind the HUD MOU

We believe that HUD and the Justice Department had good intentions when signing the MOU. The practical effect of the new policies embodies in that document won’t work and will be viewed by mortgage companies as a green light to cut corners.

According to the agencies, the MOU is “intended to address concerns that uncertain and unanticipated FCA liability for regulatory defects led to many well-capitalized lenders, including many banks and credit unions statutorily required to help meet the credit needs of the communities in which they do business, to largely withdraw from FHA lending.” In other words, as long as the FHA was doing its job, lenders didn’t want to play.

How is Wall Street interpreting the MOU? The headline in today’s MarketWatch says,  “Trump Administration Says It Will Penalize Fewer Banks Who Violate FHA Regulations”

The banks are certainly rejoicing, JPMorgan Chase says, “A first step to increasing participation in the FHA program could be the communication of support for only using the FCA, as originally intended, to penalize intentional fraud rather than immaterial or unintentional errors.” We don’t disagree but the False Claims Act hasn’t been used to penalize unintentional errors. Big banks simply want the government out of the way so they can pretty do what they want. And now, they won’t have to worry about whistleblowers either.

Despite the glee from big banks and mortgage companies, some folks in the banking world agree with us that Carson and DOJ are sending the wrong message. When Carson first proposed rolling back the False Claims Act as a tool to combat fraudulent FHA underwriting schemes, American Banker had this to say,

“Carson characterized use of the False Claims Act to fight fraud in FHA lending as ‘ridiculous, quite frankly.’ That statement may delight the mortgage industry but does not bode well for taxpayers or the federal government’s future fraud enforcement efforts. The False Claims Act is the strongest enforcement weapon the government has to fight civil frauds that cause financial harm to U.S. taxpayers. Indeed, removing the False Claims Act from the Department of Justice’s arsenal of tools to combat fraud involving FHA loans is what is ridiculous, quite frankly.”

Secretary Carson was quoted in HousingWire saying, “And then the housing crisis occurred and all of the sudden, the False Claims Act became a monster that started chasing everybody around the room, making their lives miserable, causing them an inordinate amount of pain. So they [the banks] got out. But now, the monster has been slayed.”

Of course, Secretary Carson also promises that HUD isn’t giving lenders permission to roll back the clock to the boom years like 2006. “[I]t doesn’t mean that we’re ignoring fraud or things that are done with malicious intent.” Despite his promises, we have already seen DOJ rejecting cases that we believe show material misconduct.

HUD and big banks say the change will lead to banks to loan more money to homebuyers. We think it means banks will go back to their old tricks, the same tricks that put the economy into a recession just over a decade ago. A recession in which many hard-working people lost their job, their home or both.

Our bottom line? This MOU is a return of crony capitalism. The government is making it clear to big banks that there will not be much of a price to pay for knowingly flouting regulations that were put in place to safeguard the FHA insurance fund.

It’s a sad day for mortgage company whistleblowers and taxpayers. Ultimately, for homeowners too.

In 2018 I addressed the whistleblower bar association in Washington DC. We predicted this would happen. A Justice Department prosecutor shared the stage with me and promised the audience that the government would continue to vigorously prosecute fraud involving residential lending. Today’s MOU says otherwise. At least now the government isn’t hiding their intentions

As long as banks and mortgage companies hurt taxpayers and consumers, we will work hard to hold banks accountable for their wrongdoing. Although that job just got much harder, we are still in the fight. For more information visit our whistleblower reward page.