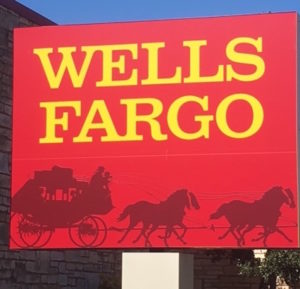 Ahhh, Wells Fargo (or Hells’ Cargo as it is affectionately known in the office.) How can a company be so inept? Scandal after scandal after scandal. This time, regulators are demanding answers about why the company wrongfully foreclosed on hundreds of homes. Entire families displaced and put on the streets.

What does Wells Fargo have to say? “We want to satisfy our customers’ financial needs and help them succeed financially. This unites us around a simple premise: Customers can be better served when they have a relationship with a trusted provider that knows them well, provides reliable guidance, and can serve their full range of financial needs.”

Buried in a regulatory filing was a disclosure that for a five year period, a computer glitch caused “certain accounts” to be improperly denied a mortgage modification. The bank is setting aside $8 million to compensate those families. In our opinion, $8 million isn’t enough to compensate a single family whose home was taken from them.

It’s not like the bank can give their houses back. Cherished childhood memories gone. And all because the bank made another mistake. But who is responsible for those mistakes, it is certainly not the rank and file employees (although they are the ones taking the flack).

Assuming that the bank is correct and only 400 homes were wrongfully taken, $8 million comes out to be $20,000 per homeowner. Where can you buy a home for $20,000? In most markets, that is not enough for a down payment. And who will loan money to someone who just went through a foreclosure?

The credit scores of those folks are ruined. Bankruptcy? That could hurt someone’s employment chances. Pulling kids out of school and moving them mid-semester? How do you compensate for that?

Another thing that bothers us is that Wells Fargo has been silent on what efforts they are making to find these affected homeowners. Assuming the bank can even identify them.

The banks claims that approximately 400 people have lost their home. We think the number is in the tens of thousands. How do we know?

We have spoken with hundreds of borrowers who tried to navigate through the mortgage modification process. Most claim they were forced to resubmit the same paperwork over and over. Along the way, many just gave up.

Thousands just walked away from their home. They spent every dollar they had on fighting the bank. A bank that has almost two TRILLION dollars in assets. As one former homeowner said to us, “there are bank robbers and then there are ‘robbery banks.’”

This latest scandal involves faulty loan modifications. But this time isn’t Wells Fargo’s first time at the rip off rodeo. Just five weeks ago, the bank was accused of using complex financial investments to rip off mom and pop investors.

And who can forget the fiasco over millions of accounts opened without their customers’ permission? Repossessing cars?? The list goes on and on.

Unfortunately, Wells Fargo has become such a joke that you almost know that any news story that begins with the words “Wells Fargo” is going to end badly!

Despite the wake of destruction that Wells Fargo has left behind, the rank and file people who work there are wonderful.  Hard working, concerned… and unfortunately, powerless to fix things.

While the class lawyers are lining up to help the latest round of victims, we are looking for Wells Fargo whistleblowers.

The best way to fix things at Wells Fargo is by breaking up the bank. Senior management is too diseased and the corporate culture too far gone. Unfortunately, many folks in Congress don’t have the stomach to take on America’s third largest bank. There really is something to that slogan, “Too big to fail.”

[One ray of sunshine… in February, the Federal Reserve ordered that Wells Fargo can’t grow its asset base until it “fixes” its problems. But what does “fix” mean and how serious is the Fed?]

If Congress won’t break up the bank just yet, the next best strategy is empowering rank and file employees to fix things. And Congress did just that by passage of the Financial Institutions Reform, Recovery and Enforcement Act. FIRREA for short.

That law empowers Wells Fargo whistleblowers to report misconduct by the bank and receive rewards of up to $1.6 million. If we can build an SEC whistleblower case, there is no limit on the size of the reward.

Why file for an award?

First, under a 2018 United States Supreme Court case, workers no longer are protected by the anti-retaliation provisions of Dodd-Frank unless they file with the SEC. Calling a company’s ethics hotline doesn’t protect you. Instead, it could get you FIRED.

Second, filed whistleblower cases have a much stronger chance of getting investigated and prosecuted. They go to the front of the line.

Third, is knowing that you made a difference in stopping greed and corruption.

And finally, there are the awards. Multimillion dollar rewards are possible but only of you file. (And usually that also means being the first to file.)

Two Bank of America whistleblowers made a combined recovery in excess of $100,000,000.00. When big banks engage in big wrongdoing, big rewards are possible.

We speak with bank whistleblowers every day. Unfortunately, that means we know that not every incident of Wells Fargo’s wrongdoing has likely been made public yet.

Political winds change constantly but even the bank’s staunchest political allies are unable to continue to fix Timothy Sloan’s messes.

If you have inside information of wrongdoing involving a bank or financial services company, call us. For more information please visit our FIRREA whistleblower information page. Ready to see if you qualify for an award? Contact us online, by email or by phone at (414) 704-6731. All inquiries are protected by the attorney – client privilege and kept strictly confidential.

When will they learn? Otherwise educated, smart and very wealthy Americans continue to hide money offshore in an effort to … END_OF_DOCUMENT_TOKEN_TO_BE_REPLACED