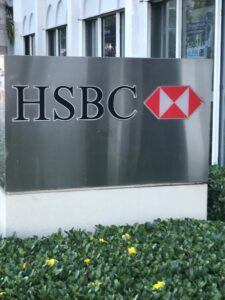 Anyone who reads this blog or our sister Banking Misconduct blog knows we are no fans of big banks. Countless times we discussed the latest wrongdoing at HSBC, Wells Fargo or Bank of America. Sometimes, however, even the bad guys do good things. Tonight, we tip our hats to HSBC for foiling a half billion dollar fraud scheme.

HSBC has been caught many times caught helping money launderers, drug traffickers and tax evaders. Things were so bad in 2015 that then CEO Stuart Gilbert admitted the bank was a “source of shame.” We hope that after paying record fines around the world, the bank may be changing for the better.

Our story begins in the African nation of Angola. After 38 years in power, President José Eduardo dos Santos’ reign as president came to end last year. And in his final weeks in office, $500 million dollars suddenly disappeared from the Angolan central bank.

The president’s son, José Filomeno dos Santos, was the head of Angola’s sovereign wealth fund. He has now been charged criminally and remains a central suspect in the brazen theft. (The Wall Street Journal says he is cooperating with authorities.)

To get the money out of the country, the younger Mr. dos Santos and others allegedly set up an international investment fund. The purpose of the fund was ostensibly to help the country generate hard currency and refinance debt. We think the purpose was to line their pockets while there was still time.

The country’s finance minister was skeptical of the plan and questioned the two men who were behind the deal. One was a friend of the president’s son and a former Angolan banker. Despite the skepticism, the central bank’s governor approved the plan. (He too has now been charged.)

Shortly thereafter $500,000,000.00 was wired to the account of an entity that appears to be a phony offshore investment company that uses an accountant’s address in a “gritty” part of London. That account was at HSBC.

Shockingly, a half billion dollar wire fund from a central bank in Africa to a non-existent company that appears to simply be a mail drop spurred no diligence by HSBC. UK law is much like American law in that banks have a due diligence requirement and an obligation to look for suspicious transactions.

Prosecutors then say that the accountant, Bhishamdayal Dindyal, began a campaign to launder the money out of the HSBC account. When Dindyal walked into a different London HSBC branch and attempted to wire $2 million to an account in Japan, an alert HSBC teller refused to process the wire and froze the account.

By then and thousands of miles away, Angola’s new president and finance minister were asking questions. They say they found forged bank documents and realized the investment fund was a scam. Prosecutors, working with HSBC, were able to get all but $8,000 of the $500 million. We suspect that amount represents bank fees.

This story has a happy ending. HSBC listened to their teller.  The victim of the phony investment scam (the people of Angola) got back their money. Better yet, if proven guilty, the masterminds behind the scheme could wind up in jail.

Many times, these stories don’t have happy endings. We often see bankers implicitly cooperating in these schemes. Whether they are getting kickbacks or simply earning bonuses for having high account balances, many bankers turn a blind eye to suspicious transactions.

When that happens, banks can often be held responsible by the victims. If a bank facilitates a fraud or engages in “willful blindness” of such a scheme, it can be on the hook for any losses. That is important because often the promoter of the scheme is either in the wind or has spent all the money.

There is another angle too. Whistleblower rewards. Had HSBC not listened to the teller, that teller may have been eligible for a cash reward.

In 1989 after the savings and loan crisis, Congress passed the Financial Institutions Reform, Recovery and Enforcement Act. FIRREA for short.

That law fell into disuse but was dusted off after the most recent banking crisis that occurred in 2008. This time Congress strengthened the law and added a whistleblower reward provision. Now, if a federal insured bank does something seriously illegal, the government can prosecute and the person reporting the violation can earn a cash reward of up to $1.6 million.

The rewards are based on a percentage of how much the government collects from the wrongdoers but the formula is designed to ramp up quickly making maximum $1.6 million rewards very possible.

HSBC isn’t a US bank but it has offices in 80 countries including the United States. And because they have branches here, those branches are insured by the government. Those U.S. branches give the U.S. jurisdiction to investigate and prosecute many otherwise foreign banks.

We suspect there was a tremendous amount of bribery or corruption going on as well. We believe the president’s son and the former head of the central bank were probably paid for their participation. And when those corrupt acts involve a foreign government official, awards become available under the Foreign Corrupt Practices Act.

Banking fraud goes on all over the world. Much of it is prosecutable in the United States. This is especially true since most of these fraudsters want U.S. dollars meaning the wires are passing through a U.S. correspondent bank. One more way the government can obtain jurisdiction.

If you have inside knowledge of serious corrupt banking practices, contact us. You may be eligible for a cash reward. By getting the U.S. authorities involved, we may also be able to help put an end to the fraud.

For more information, contact us online, by email at or by phone at 414-704-6731 (direct). All inquiries are protected by the attorney – client privilege and kept confidential. You may also visit our FIRREA bank whistleblower or foreign bribery whistleblower reward pages.

*We remind readers that Mr. José Filomeno dos Santos and the others have only been charged. An indictment or arrest is not evidence of guilt. They remain innocent until proven guilty.