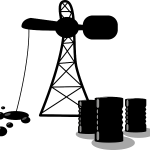 Cobalt International Energy is a petroleum exploration and production company based in Houston. Despite its U.S. roots, it has interests in the west coast of Africa. Gabon and Angola to be precise. Several years ago, the company announced it had discovered oil offshore of Angola. What should have been cause for celebration wasn’t.  Cobalt faced both a bankruptcy filing and SEC investigation as to possible violations of the Foreign Corrupt Practices Act (FCPA).

Although the SEC just announced that it was closing its foreign bribery probe, we are still investigating the company’s international operations. We hope our efforts will find a whistleblower with inside knowledge of foreign government bribery or falsified books and records. Information about either could earn a big whistleblower award.

Why Cobalt International Energy? The oil and gas industry is rife with corruption. That is especially the case when one wants to drill off the coast of Africa. And Cobalt’s financial pains (as evidenced by the bankruptcy filing) means the company needs a quick turnaround. What better way than to line the pocket of some tin pot oil ministry employee.

Cobalt filed a voluntary reorganization plan in bankruptcy court in December of 2017. At the time of its bankruptcy, Cobalt was having trouble making payments on nearly $3 billion in debt. Coupled with a long-term downturn in exploration and problems in its Angola operation, the only solution was to seek help from the bankruptcy court.

Although the company sought protection from creditors, its Chapter 11 filing allowed Cobalt to keep its doors open. That gambit may have been successful.

Just one month later the bankruptcy court approved Cobalt’s settlement plan. As approved by the court, Cobalt will sell its Angola operations to its venture partner there in return for $500 million in much needed cash.

The sale had been tied up because of some missing approvals from the Angolan government and two international arbitrations. There is still another court hearing in March to approve the company’s reorganization plan but that should now happen with few problems.

On the heels of the good news from the bankruptcy court, we also learned from Cobalt’s lawyers that the SEC was closing its investigation of the company for violations of the Foreign Corrupt Practices Act. If true, this is the second time the company dodged recent government bribery probes.

We know from the company’s SEC filings that the SEC’s first investigation was closed without charges in January of 2015. Because the SEC doesn’t discuss cases that it declines to prosecute, there is little public information available. What we do know is that the investigation centered on the company’s Angola operations.

On January 29 of this year, the company’s lawyers announced that the SEC’s second foreign bribery investigation was dropped. Once again, no charges were filed.

The first investigation appears to have centered on Cobalt’s involvement with a company called Nazaki Oil and Gaz SA. There were allegations in that case that Cobalt International may have paid or offered bribes to a senior Angolan public official.

In the more recent case, the SEC was apparently investigating payments made to a technology center. Those payments were allegedly required according to a contract with their venture partner Sonangol, Angola’s state owned oil company.

The connection with Sonangol is significant for several reasons.

First, because Sonangol is a state owned company, its officials are considered foreign government officials and therefore are subject to the Foreign Corrupt Practices Act. Bribery and government corruption is actionable under the FCPA only if the corruption involves public officials. In many countries certain industries such as airlines, transportation, healthcare and energy are government run. That makes bribes to these officials actionable under the FCPA. (The law doesn’t apply to bribes to private company officials.)

Second, Sonangol is no stranger to corruption allegations. Last year German company F.H. Bertling Ltd and six of its present or former company officials we convicted by the U.K. Serious Frauds Office. The company and workers were criminally charged with conspiracy to make corrupt payments to an agent of Sonangol. A seventh worker was acquitted.

At least two of the officials were sentenced to prison.

Bertling is a freight forwarding business. Prosecutors say that the company was offering bribes to secure a $20 million contract in Angola. The company said in a statement it had paid $250,000 to an official in the hopes of releasing contractual funds owed to the company.

Britain’s Crown Court took a different view, “[This crime] causes significant environmental impact and deprives the community, especially in developing countries of proper and honest business transactions and undermines international relations. It deprives others of the opportunity for advancement. Each [defendant] played a significant role in the fraudulent activity, which required discussion and planning and was pursued for a year in total for the company’s financial gain.”

The most recent investigation of Cobalt International Energy involved payments to a “research center.” Global Witness questions whether the research center even exists.

“BP and its partners including Houston-based Cobalt have contributed $175 million over the past two-and-a-half years to fund a project in Angola known as the Sonangol Research and Technology Center (SRTC), with another US$175 million due to be paid by January 2016.

Global Witness asked BP and Cobalt to provide any information that confirms the SRTC exists. The companies did not provide this information in their responses.”

The research center is tied to Sonangol which is reportedly run by the daughter of Angola’s president.

Bribe or Cost of Doing Business?

It’s hard to do business in certain developing countries. It often seems like to get anything done, someone has to “grease the skids”.  Bribes are viewed as a cost of doing business. That doesn’t make them legal, however.

Although we don’t have all the facts, we have participated in enough foreign bribery investigations to have a pretty good idea of what was going on with Cobalt and Angola. (Neither the SEC nor Justice Department typically release their investigative records. If no one is charged, the records probably never see daylight.)

If a company as part of doing business in a foreign country must pay a fee or participate in some research project, that is probably not a bribe. But as in the U.K. case, giving some company official $250,000 probably is illegal. In between is a lot of gray area.

Does the “research center” that Cobalt was asked to help fund even exist? Global Witness has its doubts. How were the payments made? A clear indication of fraud is when they are paid through an intermediary or agent or when they are mischaracterized on a company’s books.

While we have our doubts as to whether Cobalt should have skated on the second bribery investigation, we also understand that prosecuting cases where few records and witnesses typically exist is difficult. That is why whistleblowers are so critical in these cases.

Awards are based on what the government collects from the wrongdoer. With awards between 10% and 30% and average foreign bribery penalties measured in the tens of millions of dollars, the awards are often huge.

Unlike some of the other whistleblower programs, the SEC program does a fantastic job of protecting the identity of whistleblowers. Investigators know that people will be reluctant to step forward if their identities are made known. We have the experience and knowledge to best protect your identity throughout the process.

We don’t know if Cobalt is not guilty of the suspected foreign bribery for which they were investigated. In fairness to the company, they may be not guilty. Or the government may simply not have possessed enough evidence to go forward. As noted earlier, these cases are almost impossible to prosecute without a whistleblower.

What we do know is that often where there is smoke, there is fire. And doing business in the energy sector in Ghana and Angola involves a heck of a lot chances for corruption. Without you, however, we can put an end to it. (And it’s not just Cobalt Energy, many mining, natural resource and oil and gas companies are also involved in these criminal activities.)

With your help, we can make a big difference in global corruption. To find out more, visit our foreign bribery information page or contact us directly. We can be reached online, by email () or by phone (202-800-9791). All inquiries are protected by the attorney – client privilege and kept confidential.