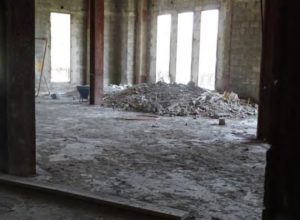 A Hotel Built with U.S. Tax Dollars in Afghanistan. Where Did the Money Go? (Keep Reading)

Bribery of public officials is endemic. Even the United States isn’t immune. Mention corrupt public officials and most immediately think of Chicago, Detroit, New York or Miami. While all those cities have public corruptions problems, in some countries the problem is much worse.

Public corruption hurts everyone. The price of goods and services can increase dramatically in areas where corruption is prevalent. Each time I travel to Detroit, I pass the half built Wayne County Jail. It was abandoned because of constant cost overruns and allegations of payoffs and bribes. As bad as these cases are, public corruption cases can become deadly when bribes to public officials result in building inspectors and other overlooking shoddy construction. Today’s New York Times carries a story about the recent earthquakes in Iran.

The people interviewed by the Times claim there was nothing wrong with the building codes or construction materials. A climate of corruption and bribery allowed contractors to slap together buildings with improper foundations and shoddy quality control. How did it happen? Because building inspectors and other officials were paid to look the other way.

Recently we were involved in a False Claims Act case in Pakistan. Uncle Sam paid a U.S. contractor to build hospitals in underserved areas of the country. The project should have been a good will gesture to a country torn by poverty and religious extremism.

The modern hospital we saw had operating rooms that were unsafe, an air handling system that didn’t work and that was missing many of the features that the contracts required. An engineer we spoke with said the hospital was nothing more than an empty shell.

What went wrong? Just about everybody was taking money earmarked for the hospital and instead lining their pockets. There was greed by the U.S. contractor and public corruption by Pakistani officials. Taxpayers and patients were the big losers.

Much of the construction work around the world goes to American companies. When those contractors rip off the government, there is usually an opportunity to collect a False Claims Act whistleblower award. Even if no taxpayer money is involved, whistleblower awards may be available if public officials were bribed or offered payoffs.

The Civil War era False Claims Act offers awards to people with inside information about fraud involving government projects and taxpayer funds. For foreign construction projects, that usually means building facilities for government agencies or foreign aid projects financed with taxpayer money. Examples include the U.S. embassy in Mexico, a military base in Turkey or a State Department Foreign Aid project in Haiti. (There is no reason the building project needs to be foreign. Courthouses, interstate highways and schools in the United States also qualify if there was fraud by the contractors.)

The Foreign Corrupt Practices Act makes it illegal for companies and individuals to bribe foreign government officials. Even if the company paying the bribe isn’t a U.S. company, Uncle Sam says it has jurisdiction if any part of the corruption scheme takes place in the U.S. or if company paying the bribe sells shares of its stock on a U.S. exchange.  That means a German construction company building a hospital in Iran could be prosecuted under the FCPA if that company paid a bribe to an Iranian building inspector and that German company sells shares of its stock on American markets.

Some may ask why the government cares about public corruption and bribery that occurs outside the United States. Congress says it wants to create a level playing field for honest businesses. There is no reason why greed and corruption should be awarded.

Most other developed countries and have passed similar laws that prohibit offering or accepting bribes.

The reasons identified by Congress certainly make sense. The recent deaths in Iran highlight another reason why we need to be vigilant against corruption and bribery. We believe there is a direct link between corruption and shoddy construction projects… projects that sometimes lead to death and serious injury.

Some companies pay bribes to get a license or permit. Others, however, pay bribes to avoid inspections. They hope that by “greasing the skids”, building inspectors and code enforcement officers will overlook obvious safety issues and defects. That appears to what has happened in Iran.

Whether a U.S construction project, foreign construction involving federal funds or a foreign building project using contractors with ties to the United States, companies that commit fraud or bribe government officials have no business in the construction industry. These activities are crimes. And each year people suffer or lose their lives because of these crimes.

The False Claims Act and SEC Whistleblower Program offer cash awards to those with information about these frauds.

To qualify for an award, you must have inside or “original source” information about the fraud or bribery. Second hand information isn’t effective.

You also must be the first to file. Wait too long and someone may claim an award first. (The SEC also penalizes whistleblowers who “sit on” the information instead of promptly reporting.)

Depending on the program, you may have to file a sealed complaint in federal court. That sounds like a hassle but we can handle all the details for you. And there is never a fee for our services unless we collect money on your behalf.

Ready to learn more? Visit our FCPA information page for more details. Want to know if you have a case? Contact the author of this post, attorney Brian Mahany, at or phone at (414) 704-6731 (direct). All cases are handled on a contingent fee basis meaning we only get paid when you get paid.

All inquiries and consultations with us are confidential. Even if you don’t hire us, what you tell us remains confidential.

Both the SEC and False Claims Act have robust anti-retaliation policies. Even if your identity is discovered, companies can’t retaliate or fire someone for blowing the whistle. Penalties include back and future lost wages, compensatory damages and attorney’s fees. Most damage awards can be doubled.