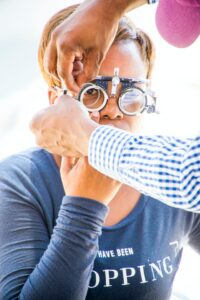 According to the lawsuit, the clinic is owned by eight physicians. It employs 12 ophthalmologists and 14 optometrists. Unlike traditional healthcare providers who bill per service, the clinic received much of its money through a fixed capitation rate. Called a “cap” rate, these payments were made on a per member, per month basis no matter which services or how many services were provided.

The idea behind cap rates is to lower healthcare costs. Because the provider gets the same payments each month, there is a built-in incentive to not over treat patients. Cap rates are also common for mental health services and with Medicaid.

The clinic was also eligible for certain premium or bonus payments for treating clients with significant health problems.

Lovell and Mendez both worked for the eye care clinic. Both worked as billing supervisors and therefore had direct knowledge of how the clinic was getting paid. They claim that for at least 10 years, the clinic submitted false cost reports simply so they could bilk more money from Medicare. They also say that management knew the cost reports submitted were false and “intentionally inflated.”

To qualify for bonus payments, the two say the clinic instructed staff to falsify or “upcode” patient care data. Upcoding occurs when a biller assigns an inaccurate billing code to increase reimbursement.

In addition to manipulating and improperly inflating usage data, the two whistleblowers accuse the eye care clinic of direct fraud. They say the clinic would track denied Medicare fraud claims and then change the codes so they could rebill. The new codes were often inconsistent with the actual diagnoses in the patient files.

The whistleblowers say the clinic knew that fraud and upcoding were taking place. The clinic’s CFO allegedly instructed people in the billing department to change codes simply so the clinic could get more money from taxpayers. (Medicare is funded with tax dollars.)

Things were so bad that at times the clinic submitted bills for services never even performed. These services would include glaucoma screenings and vision tests. Sometimes bills were submitted for individuals who were not even patients!

The two whistleblowers named the eye care clinic and several of its managers in their lawsuit. They claim the clinic’s CEO, was “directly involved in the covering up of wrongdoing.” They also say that the CFO, instructed employees to submit false and inflated claims.

Also named are the eight doctors who own the clinic. Lovell and Mendez say that all of them knew of the ongoing Medicare fraud schemes at the clinic yet took no action.

The two whistleblowers filed their case in September 2015. In December of this year, the government declined prosecution. Under the False Claims Act, the government can take over the case, rely on the whistleblower’s own lawyers to prosecute or ask the court to dismiss.

As noted above, this case was filed under the False Claims Act. Qualified whistleblowers who file these claims may be entitled to awards. The Act also has anti-retaliation provisions for those who lose their job because they blew the whistle.

The information must be “original source”. That means the whistleblower needs inside information. Something already in the public domain or in another court case doesn’t qualify.

Finally, the whistleblower needs to be the first to file. The term “filing” means filing a lawsuit under seal in federal court. That requires a lawyer.

Worried about legal costs? The act has an attorney’s fee provision and most lawyers take these cases on a contingent fee basis.

Of course, there are exceptions to these rules but we urge would-be whistleblowers with information to promptly seek counsel. Delaying could mean you do not get an award.

The Medicare fraud lawyers at MahanyLaw have helped their whistleblower clients collect tens of millions of dollars in rewards. We can help you stop the fraud, earn the maximum award possible and protect you against retaliation.

Need more information? Visit our Medicare fraud information or Florida whistleblower pages or contact us directly. All inquiries are protected by the attorney – client privilege and kept confidential. To speak with a lawyer, contact attorney Brian Mahany at or by phone at (414) 704-6731 (direct).

[Author’s Update: November 2017. We have deleted reference to the name of the eye care clinic and that of the employees and physicians named in the complaint. Court records indicate that the case was dismissed. There is no record of any settlement or admission of wrongdoing. We are keeping the story posted because it remains instructional on how fraud can occur even when services are provided on a “capitated” or fixed price basis.]