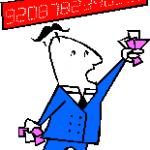 Unauthorized trading is a hallmark of sleazy stockbrokers. We expect this behavior from boiler room operations, not Merrill Lynch. In March, Merrill Lynch canned Thomas Buck after allegations that he failed to discuss pricing alternatives with customers and also for “providing inaccurate information to firm management during account reviews.” If you cut through the jargon, Buck was fired for not telling his clients about lower fee-based pricing alternatives and for lying to his boss.

After getting fired from Merrill Lynch, a place where he had worked for thirty-three years, Buck went to RBC Capital. His employment there didn’t last long, however. Last week the Financial Industry Regulatory Authority (FINRA) banned him from the brokerage industry.

Thomas Buck wasn’t a young, new broker cutting corners trying to build his commissions nor was he working at a fly-by-night “bucket shop.” As noted above, Buck had been a stockbroker for over 33 years at Merrill Lynch and was one of their top brokers with over $1.3 billion in assets under his control.

Much of Merrill Lynch’s business is now fee based. Instead of commissions, many Merrill reps charge a fixed fee for services or a fee based on the total value of the client’s portfolio. Most of Buck’s clients were still commission based, however. Instead of helping clients save money, FINRA and Merrill Lynch claim that Buck misled his customers about their pricing options. Fee based pricing tends to benefit the customer while commission based pricing often benefits the broker.

When FINRA investigated Buck after Merrill’s termination, they found even deeper problems. Regulators claim he was engaging in unauthorized trading. Industry rules require that prior to buying or selling securities for a customer, the broker must have the express permission of that customer. Buying or selling in a customer’s account without permission is consider unauthorized trading and is a serious offense.

Earlier this year a customer filed a complaint with Merrill Lynch complaining that Buck engaged in excessive trading. Called “churning,” some brokers engage in this activity to increase their commissions. A client who was on a fee-based scheme would have been shielded from these excessive commissions. FINRA records show that Buck’s former employer, Merrill Lynch, paid $300,000 to settle the charges.

A second customer also filed a complaint this year. That customer claimed Buck engaged in unauthorized trading. Once again, Merrill Lynch paid $60,000 to settle the complaint.

In what appears to be a recent pattern of questionable conduct, three other clients made unauthorized trading complaints in 2015. All were also settled.

In 33 years as a broker, Buck only had one complaint until this year. Now he has five cases, all but one of which involved unauthorized trading and all of which involved substantial payments from Merrill Lynch to settle the charges.

There is no record that Lynch contributed anything to these settlements.

Most brokers go their entire career without a formal complaint (excluding the occasional complaint where no liability is found). We understand that in a career that spans four decades, one or two founded complaints might be possible. Having five complaints involving settlements all within the last several months signifies a significant problem, however.

In addition to the settled complaints, FINRA reports there are six other complaints that are still pending! Two of those involve allegations of unauthorized trading while the rest involve excessive trading (churning), making unsuitable investment recommendations, misrepresentations, and / or failing to advise of more suitable compensation arrangements.

With literally hundreds of clients, we wonder how many other of Buck’s clients have suffered losses.

Luckily for clients, Buck’s employer is responsible for his actions. Even though Buck can no longer sell securities, his termination doesn’t end the responsibility of his employer for customer losses.

Brokerage firms have a duty to properly supervise their brokers and insure that they are following all rules.

We are not entirely sure what happened to Thomas Buck. It is very unusual to see an almost spotless record followed by 11 complaints over a few short months. Buck waived a hearing and was allowed to agree to the sanctions without an admission of wrongdoing. He may be out of the industry but the question of “why” which is on the minds of many of his victims remains unanswered.

If you have lost money because of unauthorized trading, churning, unsuitable investments or other types of stockbroker fraud, give us a call. Most cases can be handled on a contingent fee (success fee) basis. Our initial consultations are always confidential, without cost and without obligation.