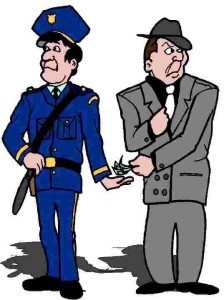 Yesterday a Manhattan federal jury convicted New York Assembly Speaker Sheldon Silver of all counts on a wide ranging anti-corruption indictment. From kickbacks to money laundering, Silver had his hand in the cookie jar. In the end, he was caught and convicted.

Early next year he will be sentenced and faces up to 130 years in prison, although his likely sentence will be much less. At age 71, even a 10 year sentence is likely to be a death sentence.

Today Silver is guilty but his senate counterpart, former Senate Majority Leader Dean Skelos remains on trial in a different courtroom. Once again, allegations of corruption.

The so-called “Three Men in a Room” refers to Silver, Skelos and N.Y. Governor Andrew Cuomo. Together these men ran New York State. Apparently with a fair amount of “help” from the private sector too. Although Cuomo has not been charged with any wrongdoing, his close ties to Skelos and Silver have raised many suspicions. Ditto for his sudden unexplained move to disband an anti-corruption task force before it could announce any findings.

What does this mean for whistleblowers? Plenty!

New York has one of the strongest whistleblower statutes in the nation. The New York False Claims Act pays big bucks to whistleblowers that come forward with information about people defrauding taxpayers or tax funded programs. It wasn’t designed for use against corrupt politicians but usually where you find a pol on the take, there is someone paying the bribe. If that person is a businessperson and they expect a “favor” involving tax dollars then the False Claims Act has been violated.

Under New York’s False Claims Act, whistleblowers who come forward can receive up to 30% of whatever the government collects from wrongdoers.

As an example of a possible violation, count one of the Silver indictment accused Silver of steering state grant money to a cancer physician. In return the doc referred cases to Silver’s law firm.  The physician hasn’t been indicted but could certainly be on the hook civilly under the False Claims Act. Taxpayers want grant money to go where it is needed most, not to who is willing to do favors.

The conviction of one of the most powerful politicians in New York should empower more whistleblowers to come forward. Unfortunately there will probably always be corruption in New York. Recently, however, Albany has become a cesspool of dirty politicians. The New York Post reports that over 30 lawmakers have left office in New York since 2000 because of criminal or ethical charges.

How can the change? Prosecutors are doing their fair share but the best weapon are those in the know. Whistleblowers. Not every case involves a possible award but we can certainly help you navigate those waters and see if you qualify. (Inquiries are protected by the attorney – client privilege and always kept confidential.)

Whistleblowers – ordinary people with inside information about fraud and corruption – can make a difference. How do we know? Our client – whistleblowers have collected over $100 million in award monies and helped the government recoup billions of dollars.

If you are thinking about becoming a whistleblower, get our free 11 step guide to whistleblowing here. (There is nothing to fill out and we don’t need your name or email address.) Better yet, contact the author of this post, attorney Brian Mahany at or by telephone at (414) 704-6731 (direct).