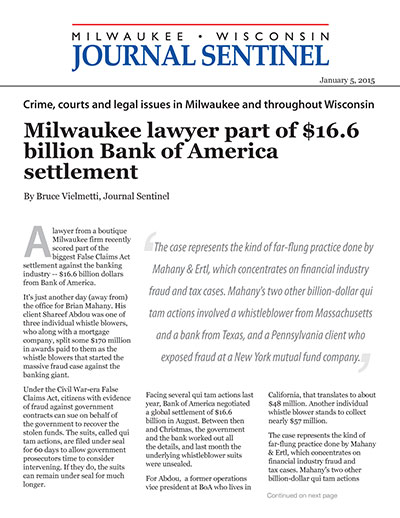 A lawyer from a boutique Milwaukee firm recently scored part of the biggest False Claims Act settlement against the banking industry — $16.6 billion dollars from Bank of America.

It’s just another day (away from) the office for Brian Mahany. His client Shareef Abdou was one of three individual whistle blowers, who along with a mortgage company, split some $170 million in awards paid to them as the whistle blowers that started the massive fraud case against the banking giant.

Under the Civil War-era False Claims Act, citizens with evidence of fraud against government contracts can sue on behalf of the government to recover the stolen funds. The suits, called qui tam actions, are filed under seal for 60 days to allow government prosecutors time to consider intervening. If they do, the suits can remain under seal for much longer.

Facing several qui tam actions last year, Bank of America negotiated a global settlement of $16.6 billion in August. Between then and Christmas, the government and the bank worked out all the details, and last month the underlying whistleblower suits were unsealed.

For Abdou,  a former operations vice president at BoA who lives in California, that translates to about $48 million. Another individual whistle blower stands to collect nearly $57 million.

The case represents the kind of far-flung practice done by Mahany & Ertl, which concentrates on financial industry fraud and tax cases. Mahany’s two other billion-dollar qui tam actions involved a whistleblower from Massachusetts and a bank from Texas, and a Pennsylvania client who exposed fraud at a New York mutual fund company.

How do such cases wind up with a Milwaukee lawyer?

“The more you do in a very narrow field, the more people discover it,” he said. “Now people say I’m the expert, even if I’m not always sure.” He also said his firm’s timing was just right, being in place after the mortgage meltdown in 2008.

But having a nationwide practice (cases pending in 29 states)  does put Mahany on the road three weeks out of four, he said.

Mahany also blogs about his interest area — a lot.

He said in 2014, he posted to his blog, Due Diligence, nearly every day, including a perfect 31 posts for 31 days in December.  He said his posts get linked to other blogs and soon he hears from clients — and from law enforcement as well, which he said has led to tips that helped him scoop mainstream financial media a few times a year.

Mahany, 56, has been practicing law for 31 years, after an earlier career in law enforcement and state government in Maine, New Jersey and Louisiana, where he attended Tulane Law School. But he’s not ready to hang it up, even after his giant payday.

“I absolutely love what I do. It’s what gets me up every morning,” he said.