PHOTO GALLERY
IN THE NEWS
Wisconsin Watchdog, June 3rd, 2015
“Legal expert: Chisholm’s gag order makes it look like DA has something to hide”

by M.D. Kittle Originally from watchdog.org 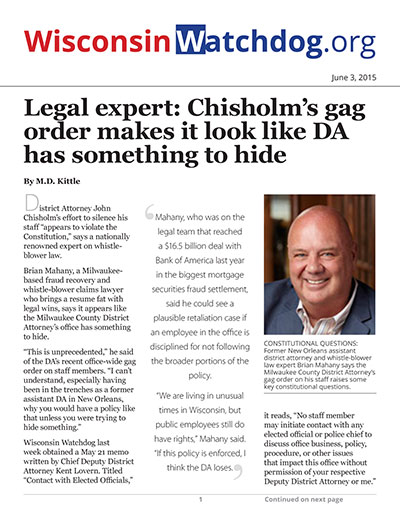 Brian Mahany, a Milwaukee-based fraud recovery and whistle-blower claims lawyer who brings a resume fat with legal wins, says it appears like the Milwaukee County District Attorney’s office has something to hide.

“This is unprecedented,” he said of the DA’s recent office-wide gag order on staff members. “I can’t understand, especially having been in the trenches as a former assistant DA in New Orleans, why you would have a policy like that unless you were trying to hide something.”

Wisconsin Watchdog last week obtained a May 21 memo written by Chief Deputy District Attorney Kent Lovern. Titled “Contact with Elected Officials,” it reads, “No staff member may initiate contact with any elected official or police chief to discuss office business, policy, procedure, or other issues that impact this office without permission of your respective Deputy District Attorney or me.”

“This policy extends to contacts with staff members of any elected official,” the memo concludes.

It’s not clear why the agency issued the gag order, but it comes in the wake of a controversial Milwaukee Police Department technology failure that sources say could derail hundreds of criminal cases sent to the DA’s office.

Milwaukee County District Attorney John Chisholm is no stranger to First Amendment problems. For five years, the Democrat and his office has been integrally involved in politically charged John Doe investigations into Gov. Scott Walker’s campaign, his former aides and conservative allies.

The investigations came with secrecy orders that an appeals court judge called “screamingly unconstitutional.” Targets of the probes could go to jail if they discussed the probe with anyone but their attorney.

In April, Chisholm made vague threats of prosecuting Walker for libel. During a visit to Iowa, the governor told a radio host there, “Even if you’re a liberal Democrat, you should look at (the John Doe raids) and be frightened to think that if the government can do that against people of one political persuasion, they can do it against anybody, and more often than not we need protection against the government itself.”

Mahany called the DA’s interoffice policy “completely overreaching.” He said if the directive simply said only certain people are allowed to talk to the media, he could understand the DA’s stance.

“This memo appears to cover everything, including contact with the very people DA staff work with on a daily basis,” the attorney said.

But Esenberg said there may be a problem with the portion of the memo that bans employees from speaking about “other issues that impact this office.”

“That is potentially broad,” said Esenberg, president and founder of the Milwaukee-based Wisconsin Institute for Law & Liberty.

“You have to concern yourself with the breadth of that language and understand that there could be protections for whistleblowers that override any attempt to sanction an employee for violating a policy,” he said.

Mahany said the policy could create some legal liability for the DA’s office under whistleblower protections.

Mahany, who was on the legal team that reached a $16.5 billion deal with Bank of America last year in the biggest mortgage securities fraud settlement, said he could see a plausible retaliation case if an employee in the office is disciplined for not following the broader portions of the policy.

“We are living in unusual times in Wisconsin, but public employees still do have rights,” Mahany said. “If this policy is enforced, I think the DA loses.”

“The policy, as it’s written right now, appears to violate the Constitution as far whistle-blower laws.”