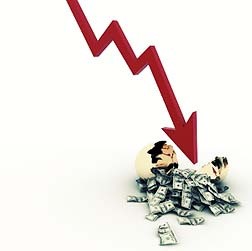 The securities industry employs hundreds of thousands of people. Most have clean records and are honest. Not every stockbroker is good at what they do but most play by the rules. And then there are folks like Jason Kronick. This week the Financial Industry Regulatory Authority – FINRA – filed formal  charges against Kronick claiming he failed to disclose two unsatisfied judgments.

Some regular readers of this blog are wondering why this is important or even newsworthy. After all, tens of millions of Americans have less than perfect credit and many have unpaid tax liens, small claims court judgments or delinquent child support problems. Having money problems doesn’t make someone a bad person but there is a correlation between having money problems and stockbrokers defrauding their customers.

Customers also have a legal right to know certain things about their broker; things like prior customer complaints, unpaid judgments, regulatory actions and criminal history. FINRA’s regulatory scheme relies on self-reporting. We require bad brokers to report when they have been bad. Unfortunately, it’s the good brokers that make mistakes who usually self-report those mistakes while bad brokers who do bad things often don’t self-report.

We don’t know if the allegations against Jason Kronick are true or false. That’s up to regulators to decide. We also don’t know whether he is a bad broker but his recent history causes serious concern.

The complaint against Kronick says that he has two unsatisfied judgments against him totaling $330,574. That itself doesn’t preclude him from working as a stockbroker or handling customer funds. Industry rules, however, require that he report those judgments and FINRA alleges that he failed to do so.

Not only did Kronick not self-report the judgments, they say that while changing jobs he completed an employment application for Vandham Securities Corp. The application asked, “Do you have any unsatisfied judgments or liens against you?” FINRA says he lied and answered “no.”

It’s one thing to “forget” to self-report but quite another to intentionally lie.

The formal complaint against Jason Kronick says that one brokerage firm, Standard Credit Securities, let him go in 2012 for “unauthorized trading and unauthorized positions.”

Prior to working at Standard Credit, Kronick worked at Securevest Financial Group. In June 2011 they fired him “after the firm became aware that he was conducting unauthorized trading activities and taking deceptive actions in an effort to conceal his activities.”

It is precisely because people with money problems sometimes take desperate measures that regulators want to know when a stockbroker has an unpaid lien or judgment. We don’t know if the “unauthorized trading” in his terminations from Standard Credit or Securevest is related to his money problems but we think there is a strong probability.

I said in the preceding paragraph that we don’t exactly know if there is a correlation. FINRA doesn’t know either. According to the complaint, the industry regulator is also charging Kronick with failure to cooperate in their investigation and turn over documents.

Jason Kronick is not presently licensed. We don’t know, however, if there are customers who have been defrauded by him. Luckily, even if Kronick is penniless, the firms that employed him may be on the hook for any of his possible misdeeds.

Again, Kronick’s alleged lack of cooperation makes it especially difficult to know if he is guilty of any misconduct. FINRA says he is but that complaint is in its infancy. The point of this post is to highlight that stockbrokers that fail to report financial problems or who fail to cooperate with regulators  often have compliance issues. Always make sure of your broker’s history. FINRA operates a free online background information system called BrokerCheck.

Remember too that the brokerage firms that employ bad brokers may also be on the hook for any problems.

Think a stockbroker or other financial professional has defrauded you? Give us a call. Most cases can be handled on a contingent fee basis. For more information, contact attorney Brian Mahany at or by telephone at (414) 704-6731 (direct)