“HSBC Inquiry Would Likely Focus On Sincerity Of Tax Reforms” 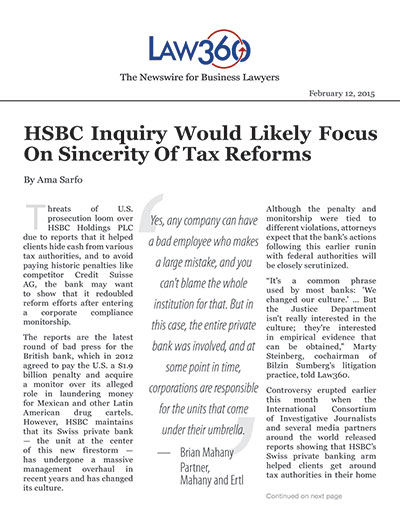 Threats of U.S. prosecution loom over HSBC Holdings PLC due to reports that it helped clients hide cash from various tax authorities, and to avoid paying historic penalties like competitor Credit Suisse AG, the bank may want to show that it redoubled reform efforts after entering a corporate compliance monitorship.

The reports are the latest round of bad press for the British bank, which in 2012 agreed to pay the U.S. a $1.9 billion penalty and acquire a monitor over its alleged role in laundering money for Mexican and other Latin American drug cartels. However, HSBC maintains that its Swiss private bank — the unit at the center of this new firestorm — has undergone a massive management overhaul in recent years and has changed its culture.

Although the penalty and monitorship were tied to different violations, attorneys expect that the bank’s actions following this earlier runin with federal authorities will be closely scrutinized.

“It’s a common phrase used by most banks: ‘We changed our culture.’ … But the Justice Department isn’t really interested in the culture; they’re interested in empirical evidence that can be obtained,” Marty Steinberg, cochairman of Bilzin Sumberg’s litigation practice, told Law360.

Controversy erupted earlier this month when the International Consortium of Investigative Journalists and several media partners around the world released reports showing that HSBC’s Swiss private banking arm helped clients get around tax authorities in their home countries and specifically instructed them on how to evade a European Union tax on bank deposits. The reports were based on documents provided by a former employee of the Swiss private bank.

The documents showed that HSBC bankers helped European clients get around the tax on bank deposits by transferring the ownership of accounts from an individual, who would be subject to the tax, to a corporation or trust that would not have to pay.

The documents also revealed new accounts of how HSBC’s private bankers helped miners, arms dealers and governments that were funding some of Africa’s bloodiest conf licts, including in the Democratic Republic of Congo, Burundi and Liberia, shield their accounts from scrutiny by tax authorities.

Immediately after the reports went live, questions started to arise about whether or not tax authorities in the U.S., U.K. and other countries whose residents purportedly used HSBC’s Swiss private bank would eventually bring criminal charges.

In the U.S., that inquiry was initially complicated by the fact that the federal government had already inked a fiveyear deferred prosecution agreement with HSBC regarding its alleged money laundering activity.

But on Monday, the federal prosecutor who brokered the deal — U.S. Attorney Loretta Lynch of the Eastern District of New York — told U.S. lawmakers that a future tax investigation into HSBC could be on the table and wasn’t compromised by the deferred prosecution agreement.

Lynch is currently undergoing confirmation proceedings to become the next U.S. attorney general, and in a written statement to members of the Senate Judiciary Committee, she explained that the 2012 deferred prosecution agreement is limited to charges the government filed in an accompanying criminal information. That information alleged that HSBC had sanctions violations and also violated the Bank Secrecy Act by failing to maintain an adequate antimoney laundering program.

“The DPA explicitly does not provide any protection against prosecution for conduct beyond what was described in the statement of facts,” Lynch said. “Furthermore, I should note the DPA explicitly mentions that the agreement does not bind the department’s Tax Division nor the Fraud Section of the Criminal Division.”

HSBC press representatives did not immediately respond to requests for comment on Lynch’s statement.

If the U.S. does charge HSBC, the bank’s case will echo that of Credit Suisse, which made headlines in May when it agreed to plead guilty and pay $2.6 billion in a settlement with the U.S. Department of Justice and federal and New York state financial regulators over allegations that it helped American citizens evade taxes.

Credit Suisse was the largest bank to plead guilty in the U.S. in 20 years, and the amount of its fine was unprecedented. If HSBC wants to avoid heading down the same path, it will have to give the U.S. government concrete proof that it has changed.

In Credit Suisse’s case, outgoing Attorney General Eric Holder said the bank had sought to shield itself, its employees and its clients from accountability by destroying bank records, deliberately subverting disclosure requirements and using offshore debit and credit cards to repatriate money.

HSBC claims it hasn’t adopted that kind of approach. In a press release, the bank emphasized that its global private banking business and Swiss private bank have undergone a “radical transformation” by shedding clients whom it believed had violated their tax obligations, withdrawing from some markets and enacting management changes.

The bank also said it largely acquired its Swiss private bank when it bought Republic National Bank of New York and Safra Republic Holdings SA in 1999 but didn’t fully integrate the business into HSBC at first, which allowed different cultures and standards to exist.

Yet Brian Mahany, a tax attorney with Mahany & Ertl LLC, says that line of argument can only go so far.

“It appears that HSBC is literally running from the unit and trying to put as much distance between the two as it can, but these problems are institutionalized — HSBC has been in so much trouble over the past years,” he said. “Yes, any company can have a bad employee who makes a large mistake, and you can’t blame the whole institution for that. But in this case, the entire private bank was involved, and at some point in time, corporations are responsible for the units that come under their umbrella.”

If prosecutors do go after HSBC for its taxrelated actions, the next question is whether they will seek a strong penalty that could cripple it, especially given the bank’s runins with U.S.authorities, even though the government has said it doesn’t want to collapse major institutions.

“As a general matter, I take government officials at their word when they say they aren’t trying to put banks out of business,” Capes Sokol Goodman Sarachan PC shareholder Sanford Boxerman told Law360.

And if federal prosecutors decide to go after top brass at the bank who were involved in the alleged tax evasion activity, the recent acquittal of former UBS AG Executive Raoul Weil will certainly be a case study for those individuals and federal prosecutors alike.

Federal authorities went after Weil, who once was the thirdhighestranking executive at the Swiss bank, alleging that he was the driving force behind a broader scheme to help U.S. taxpayers hide their assets in Swiss accounts. Prosecutors inked a slew of sweetheart deals with lowerlevel bankers and gave them immunity in exchange for their testimony, but a jury declined to convict Weil.

“I think that if the prosecutors approached this case like smaller, more traditional conspiracy cases, it would have been more successful,” said Justin Gelfand, counsel with Capes Sokol. “Instead of starting with the higherups and trying to work your way down, prosecutors should start with the people who were actually perpetrating criminal acts and hope to incentivize them into cooperating and offering testimony against their superiors.”

The loss in the Weil case is unlikely to dissuade prosecutors from pursuing other similar cases, attorneys say.

“I don’t think the government is slowing down,” Caplin & Drysdale Chtd. member Scott Michel said. “Look, the government sometimes loses a case — that doesn’t mean they stop prosecuting the crime.”