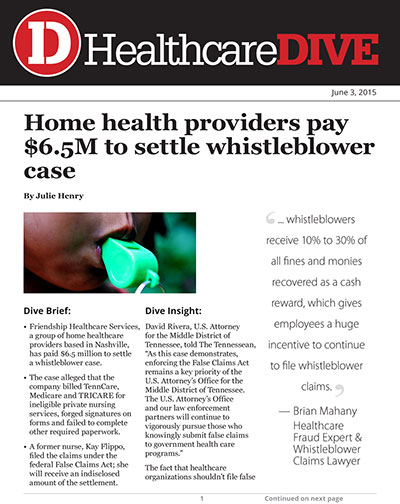 The fact that healthcare organizations shouldn’t file false claims is a no-brainer. But in many instances, these cases end up being settled because organizations don’t have the appropriate documentation to back up their claims.

According to Brian Mahany, healthcare fraud expert and whistleblower claims lawyer, whistleblowers receive 10% to 30% of all fines and monies recovered as a cash reward, which gives employees a huge incentive to continue to file whistleblower claims. In other words, this isn’t the last time you will read about a case like this.

Whistleblowers are the new American heroes. Each year private citizens who step up and become whistleblowers save the government and taxpayers billions of dollars.In the healthcare profession, they also save lives.

We have seen many cases involving unnecessary medications and surgeries, clinics and hospitals using unqualified staff, and doctors claiming they were overseeing interns when they weren’t even in the facility.

Friendship Healthcare No Stranger to Fraud

Friendship Home Health was prosecuted for fraud in Tennessee in 2012. In that case, prosecutors said the company was paying kickbacks to a Mississippi staffing company, On-Call. Court records that the charges were ultimately dismissed.

Fast forward to 2014 and Friendship found itself in the hot seat again, this time because of a whistleblower, Kay Flippo. Ms Flippo was a licensed practical nurse working for one of the Friendship HealthCare System companies.

In her whistleblower complaint, Kay claimed that Friendship was providing “skilled” nursing services with workers who were not properly trained or certified. She also said that with some patients, the company was paying kickbacks and falsifying treatment records.

Friendship may have convinced the government to drop its prosecution in 2012 but they were not so lucky the second time around. Armed with dates, times and patient names supplied by a whistleblower, the government secured a $6.5 million fine in 2015.

In announcing the fine, a Health and Human Services spokesperson said,

“Fraud involving home health services is a major problem impacting the Medicare and TennCare programs. Patients are particularly vulnerable to fraud in a home-based setting because there is often no one looking over the provider’s shoulder. This case demonstrates there are serious consequences to home health agencies that try to defraud federal health care programs.”

To learn more, visit our Medicare fraud whistleblower reward page. Ready to see if you have a case? Contact online, by email or by phone 202-800-9791. We accept cases nationwide. All inquiries are protected by the attorney – client privilege and kept confidential.