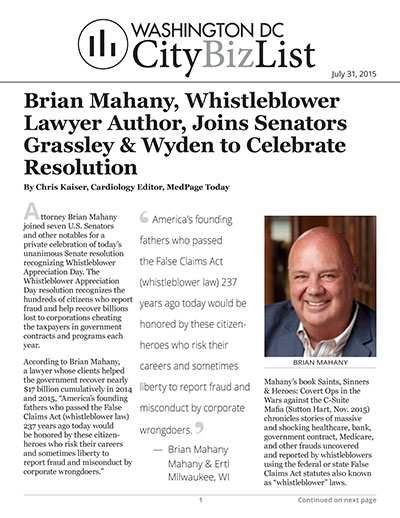 According to Brian Mahany, a lawyer whose clients helped the government recover nearly $17 billion cumulatively in 2014 and 2015, “America’s founding fathers who passed the False Claims Act (whistleblower law) 237 years ago today would be honored by these citizen-heroes who risk their careers and sometimes liberty to report fraud and misconduct by corporate wrongdoers.”

Senators Chuck Grassley and Ron Wyden, Chairman and Vice Chairman of the Senate Whistleblower Protection Caucus, and Senators Ron Johnson, Tammy Baldwin, Thom Tillis, and Mark Kirk who serve on the Caucus, joined author Mahany in praising the heroes, the U.S. Department of Justice, state Attorneys General, and other agencies that use citizen-provided information to prosecute False Claims Act cases.

Under state and federal False Claims Acts private citizen whistleblowers are incented to report fraud against the government by a cash bounty of 10 to 30% on what the government collects from corporations involved in the healthcare, government contract, financial, or other fraud. $70 billion+ has been collected to date with whistleblowers receiving hundreds of millions in reward money.

Mahany Law is a full service national boutique law firm concentrating in combatting fraud and corruption. We represent whistleblowers across the United States. Our mission is to eliminate fraud and ensure our whistleblowers obtain the maximum rewards possible from the government. We also work hard to protect our whistleblower clients from illegal retaliation.

To learn more, visit our whistleblower FAQ page. Our website also has all the information you need on a wide range of specialized whistleblower programs including the SEC and IRS whistleblower reward programs.

Ready to see if you qualify for a reward? Contact us online, by email or by phone 202-800-9791. All inquiries are protected by the attorney client privilege and kept confidential. Cases accepted anywhere in the U.S. SEC and IRS cases accepted worldwide.

Whistleblowers are America’s true heroes. We are ready to join the fight.

Five men are behind bars after being convicted of blatant fraud against taxpayers and the United States. According to court … END_OF_DOCUMENT_TOKEN_TO_BE_REPLACED