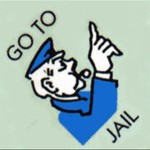 Most of our fraud stories carry an important message. Frequently we try to help readers avoid becoming victims of Ponzi schemes, stockbroker fraud and other investment scams. If there is any lesson in this story, however, it is simply that acting the fool at one’s criminal sentencing is not an effective way of avoiding prison. Just ask Michael Lucarelli.

According to the New York Post, Lucarelli, aged 52, was sentenced to 30 months in a federal prison after unleashing a long and bizarre tirade at his sentencing. We can’t help but wonder if Lucarelli was trying to raise some sort of insanity defense. Those must be raised before pleading guilty, however.

Convicted of insider trading, Michael Lucarelli first tried to blame his bosses for turning him to crime. Apparently because he didn’t have health care, he used inside information to obtain almost $1 million in illegal trading profits.

Later Lucarelli claimed that he abused cocaine as a way of relieving his Crohn’s disease.

At some point in time, Lucarelli told the judge that he couldn’t perform his sexual duties because he was hit by a taxi. Apparently those performance issues contributed to the departure of his “20 years younger” wife. We aren’t sure of how his sexual duties with his wife relate to insider trading, but he did brag about working with supermodels Iman and Kathy Ireland.

If you are scratching your head wondering what any of this has to do with his sentencing, you are not alone. Judges want to hear defendants take responsibility for their actions. They listen carefully to see if someone is sincere and truly remorseful. Bragging about supermodels, telling the judge about illegal cocaine use and blaming your boss for your criminal behavior are not effective ways of staying out of prison.

It’s difficult to figure out what was going through the mind of Michael Lucarelli at the time of his sentencing. Perhaps the stress of the moment simply overcame him. He will have the next 2 and one half years to rethink his sentencing arguments, however. He also has to think about how life will be after prison and without  $955,000 the judge ordered he forfeit as ill gotten gains. (Probably no more supermodels or cocaine.)

Our primary mission is to help fraud victims get back their hard earned money. From Ponzi schemes, to stockbroker scams to complex real estate frauds, consider us for any type of fraud recovery. Minimum loss size is $1 million although we frequently take much smaller stockbroker fraud cases. Many times cases can be handled on a contingent fee basis.