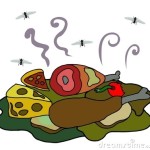 Updated February 2019 with new information about the plight of Aramark employees. HINT: They are treated about as well as inmates! If you worked or worked for Aramark and have information about fraud involving government contracts, read the first section below, you may be entitled to a reward. If you are an employee and feel you have been improperly denied overtime pay, read the second section. You may be entitled to significant overtime pay.

The banner across Aramark’s website declares the company is dedicated to “Enriching and Nourishing Lives.” Allegations of maggots, undercooked meats and altered expiration dates have called that slogan into question.

Aramark is a huge international food service company with locations in 22 countries. Based in Philadelphia, the company boasts almost $15 billion in revenues and 163,000 employees. Those revenue figures will dip just a bit; Michigan Governor Rick Snyder ended Aramark’s $145 million food service contract with the state’s Department of Corrections. The company had been providing food service to 45,000 inmates.

Since its inception, Aramark’s contract with Michigan has been fraught with problems and controversy. (We have three other Aramark stories on our Due Diligence blog; just use the search feature in the upper right hand corner.)

One former employee – turned – whistleblower accused the company of wrongful retaliation after she complained about unsanitary conditions. According to her, the company served undercooked food and meat that had fallen on the floor. She also claimed the company altered expiration dates on food. At the time of her allegations, a company spokesperson claimed that it would stand by its food safety record and “would not comment on allegations from former disgruntled employees.”

Unfortunately, for Aramark, there were many more allegations including at least two complaints of maggot infested food. Since then, the company has toned down its rhetoric and took responsibility for its performance.

It wasn’t just the food quality and sanitation allegations against Aramark that probably hurt the company. There were numerous reports of overcharging the state (inflating meal counts), employees bringing in contraband, sex between inmates and food service workers and even a murder for hire plot.

Interested in learning more? Over the last 12 months our whistleblower clients earned over $100 million in award monies. The awards are real. For more information, contact attorney Brian Mahany at or by telephone at (414) 704-6731 (direct). All inquiries are protected by the attorney – client privilege and kept strictly confidential.

[Feb. 2019] We were horrified about the treatment of prisoners in Michigan when this story first broke several years ago. Is spoiled food the fault of rank and file Aramark workers and managers? Probably not. The company apparently wants to cut corners on food service and its workforce.

Today we learned that Aramark managers are not treated much better than prisoners. And we suspect their rank and file hospitality workers have their own employment claims.

According to the lawsuit, Aramark employs 270,000 workers. Managers in the United States are divided into 8 tiers. Two managers, Harry Lacher of South Carolina and Michael Ruskowski of Florida, say they were promised an annual bonus calculated pursuant to the applicable Bonus Plan.” The bonuses are a significant portion of a manager’s pay. Ruskowski says he was owed $10,000 while Lacher bonus was supposed to be $40,000.

On December 3rd, the men received an email titled, “Attention Required: Important Notice Regarding FY 18 Bonus.” It said, “This is to inform you that bonus payments, historically paid in December, will be paid in February.”

On January 29th managers received a second email that “promised” the bonuses would be paid February 15th. If you work at Aramark, you know what happened next. Just three days after the January 29th email, the company told managers it wasn’t paying the scheduled bonuses. Instead, the company suggested it was going to pay “select leaders” a smaller bonus.

After being denied their bonus, Lacher and Ruskowski filed a lawsuit over the lost bonuses.  Their case is filed as a class action on behalf of all “Career Band 5 through 8” managers within the U.S.

If the court certifies the class, managers within the class will be given an opportunity to opt-in, to pursue their own lawsuits independently or to take no action.

The case was just filed. Although the company’s answer is not yet due, Aramark told Philly.com that the company has discretion as to what bonuses it owes managers.

Workers in the United States are entitled to time and one pay for all work in excess of 40 hours within a 7 day period. (The rules are slightly different in California.)

Many companies tell workers they are exempt from overtime. Simply because you are salaried or your employer tells you are exempt is irrelevant. The Fair Labor Standards Act does exempt managers but the test isn’t based on titles. Instead, the rules look to the level of responsibilities of the employee the company claims is exempt. For example, do they have the power to both hire and fire?

[Sure enough, Lachar’s employment agreement says he is exempt.]

If you are line worker, supervisor or manager in title only, you may be entitled to overtime pay if you are working more than 40 hours per week. Don’t let. Greedy company underpay its obligations. Workers, and the families that depend on them, deserve better.

To find out more, visit our wage theft FAQ page. Have info on adulterated food sold to prisons or our military? Red our food service whistleblower post. Ready to see if you have a claim? Contact us online, by email at or by phone at 202-800-9791. [We handle cases throughout the United States.]

We are also investigating the company’s 401(k) plan for possible violations. Rating service Brightscope says the company 401(k) only scored a 40 out of a possible top score of 100. Metrics were all below average except for plan fees which were average.