by Devlin Barrett and Christina Rexrode Link to original source 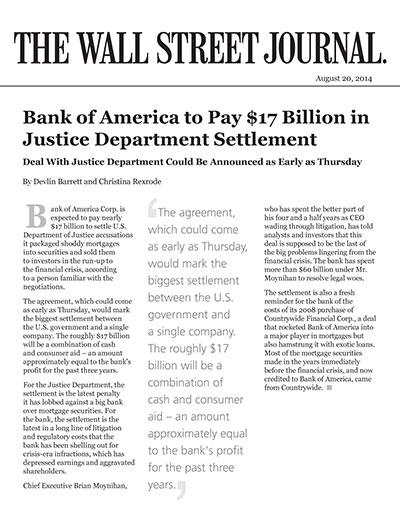 Bank of America Corp. is expected to pay nearly $17 billion to settle U.S. Department of Justice accusations it packaged shoddy mortgages into securities and sold them to investors in the run-up to the financial crisis, according to a person familiar with the negotiations.

The agreement, which could come as early as Thursday, would mark the biggest settlement between the U.S. government and a single company. The roughly $17 billion will be a combination of cash and consumer aid – an amount approximately equal to the bank’s profit for the past three years.

Chief Executive Brian Moynihan, who has spent the better part of his four and a half years as CEO wading through litigation, has told analysts and investors that this deal is supposed to be the last of the big problems lingering from the financial crisis. The bank has spent more than $60 billion under Mr. Moynihan to resolve legal woes.

The settlement is also a fresh reminder for the bank of the costs of its 2008 purchase of Countrywide Financial Corp., a deal that rocketed Bank of America into a major player in mortgages but also hamstrung it with exotic loans. Most of the mortgage securities made in the years immediately before the financial crisis, and now credited to Bank of America, came from Countrywide. 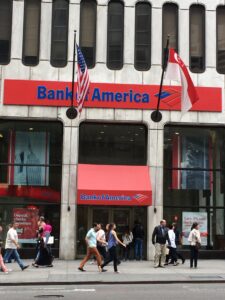 What Can Three Bank of America Whistleblowers Accomplish? How ‘Bout the Largest Fraud Recovery Against a Single Defendant in US History – $16.7 Billion!

Attorney Brian Mahany represented two of the three Bank of America whistleblowers in what became the largest lawsuit recovery against a single defendant in U.S. history. Almost $17 billion ($17,000,000,000.00).

Under a Civil War era law, the False Claims Act, whistleblowers with inside information about fraud involving government funds or government programs are eligible for a reward of up to 30% of whatever the government collects from wrongdoers.

Obviously, not all cases have recoveries in the billions of dollars. In fact, few do. But million dollar whistleblower rewards are not uncommon.

Although this case involved residential mortgage issued by Bank of America, most home loans are backed by the FHA, Fannie Mae or Freddie Mac. Because these are government programs, you may be eligible for a case reward if you have information about underwriting or servicing fraud involving mortgages. (Congress included Freddie and Fannie loans in the False Claims Act after the 2008 banking crisis.)

In the aftermath of the 2008 banking and housing crash, whistleblowers were instrumental in helping taxpayers and the government recover billions of dollars from big banks. Behind most of the big bank lawsuit headlines are hard working prosecutors and HUD professionals. And behind them are the whistleblowers. America’s unsung heroes.

If you have information about widespread mortgage fraud, you may be eligible for a reward. This post discusses Bank of America. Since it was originally posted in 2014, we were again successful in prosecuting another colossal mortgage lender, Allied Home Mortgage. In 2016 and 2017 the Department of Justice obtained a jury trial verdict of almost $300,000,000.00.

Where did the case originate? We filed on it on behalf of a former Allied branch manager turned whistleblower.

To learn more, please visit our False Claims Act whistleblower rewards page. Ready to see if you qualify for a reward? Contact us online, by email or by phone 202-800-9791. We accept cases anywhere in the United States. All inquiries are protected by the attorney – client privilege and kept confidential.