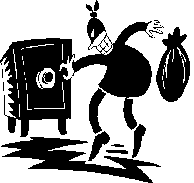 A stockbroker who delivers medication to a terminal cancer patient in a snowstorm… sounds like a great guy, right? In most situations it would be wonderful.  In this case, the man wearing the hero’s disguise was nothing more than a common thief and villain.

Last week the SEC obtained a $1.8 million judgment against former LPL broker Blake Richards of Buford, Georgia. What did Richards do? According to the SEC, he stole $2 million dollars from his clients, some of whom were elderly.

Stockbrokers are human. They make mistakes just like we all do. If a broker makes an unsuitable stock recommendation or fails to carry out an order for a customer, we file an arbitration demand, collect damages and move on. Mistakes can easily be forgiven but the SEC said Blake Richards was guilty of outright theft.

The complaint is tragic in its allegations. Richards either ripped off elderly clients or took the life savings of his other clients leaving them with no money for retirement. One of the victims was his girlfriend’s widowed mother!

In another incident, the SEC says, “On at least one occasion, Richards provided an investor with a fictitious statement on what purported to be LPL Financial letterhead. Richards also informed another investor that the investor had funds in a Jackson Life Insurance product. This statement was false. Jackson Life Insurance has no record of that investment, or any investments related to affected clients, Richards or his entities.

You can guess the rest of the story. What he told his victims was pure lies.

To keep the scam going, on at least one occasion, Richards prepared a fictitious statement using his employer LPL’s letterhead.

Although LPL is ultimately responsible for the conduct of its agents and employees, for their part they did act swiftly once they found out and alerted authorities.

What happens next? The SEC did not charge LPL but we believe that LPL is absolutely liable for the victims’ losses for its failure to supervise. Richards has been barred from the industry.

Although Richards is done, customers are still trying to get their money. As of October 2019, FINRA shows one pending complaint where a customer is still seeking $1.7 million. The customer is alleging funds were “misappropriated” from the customer’s account. Another customer complaints were settled for $306,000, $42,000, $215,000 and $1.8 million. The latter was a collective action by multiple customers.

People who steal usually have been up to no good for a long time. Although the SEC complaint dealt with the outright theft claims, we are pleased to see that LPL has so far settled all claims filed against Richards at or close to full value. [Of course the largest claim is the one that has not yet resolved.]We were dismayed to see Ameriprise, however, has thus far not paid on one of the claims stemming from Richards prior employment there.

Our concern, of course, is that Richards was doing other bad things during his 13 years as a stockbroker.  (While registered as a stockbroker, Blake Richards also claimed to have a side business called Lanier Wealth Management.)

Obviously, you should be very suspicious whenever a stockbroker has you make a check payable to anyone but the brokerage firm.  Be very suspicious if your broker wants the check made out to him. Also, don’t wait months to obtain a statement. If you have any questions or concerns, call the brokerage firm directly. Most have very robust customer service departments that can instantly tell you the status of your investments and deposits.

We also recommend that you always use the free BrokerCheck online search tool from the Financial Industry Regulatory Authority. Everyone makes mistakes. One reportable event probably wouldn’t scare us away (unless a criminal conviction for theft or lying), but 10 disclosures should make anyone nervous.

Victim of stockbroker fraud? Give us a call. Most cases accepted on a contingent or “success” fee meaning no legal fees unless we recover for you. For information, contact attorney Brian Mahany at (414) 704-6731 (direct).

The stockbroker fraud lawyers at Mahany Law represent investors anywhere in the United States. Our cases are handled on a contingent fee basis meaning you don’t pay unless we win. Our minimum loss criteria is $1 million but if you are close, give us a call and we will try to help. We also invite you to visit our LPL Financial fraud page.