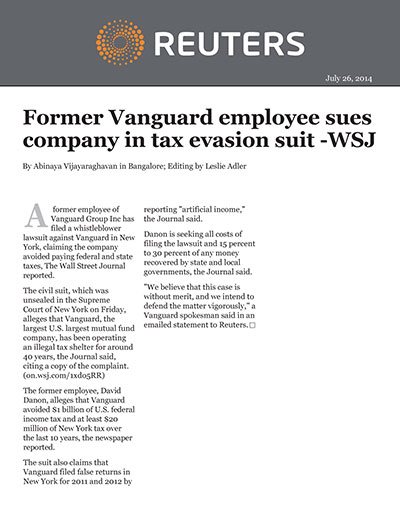 The civil suit, which was unsealed in the Supreme Court of New York on Friday, alleges that Vanguard, the largest U.S. largest mutual fund company, has been operating an illegal tax shelter for around 40 years, the Journal said, citing a copy of the complaint. (wsj.com)

The former employee, David Danon, alleges that Vanguard avoided $1 billion of U.S. federal income tax and at least $20 million of New York tax over the last 10 years, the newspaper reported.

The suit also claims that Vanguard filed false returns in New York for 2011 and 2012 by reporting “artificial income,” the Journal said.

Danon is seeking all costs of filing the lawsuit and 15 percent to 30 percent of any money recovered by state and local governments, the Journal said.

“We believe that this case is without merit, and we intend to defend the matter vigorously,” a Vanguard spokesman said in a emailed statement to Reuters.